So today I am going to the hospital for a Medical Thing.  It’s one of those special moments that happen to you when you hit a certain plateau and your doctor looks at you and says, “You’re how old?  Oh, do we have a treat in store for you!”

I am being assigned medical treatment for demographic reasons.

On the one hand, it’s something that I ought to do.  And if there are any larger meanings hidden in the current debacle over Republicare, one of them surely is that I should be glad to have health care at all in a country where freedom is just another name for being able to die of something that could have been easily cured if only you had the money.  So I count myself glad for the opportunity, unpleasant as it is.

On the other hand, I just know it’s going to turn out like this: 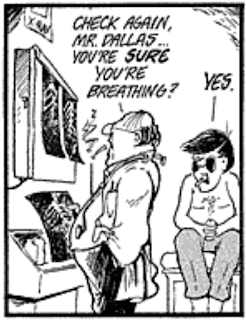 Steve Dallas, I am with you.

I spent all day yesterday Not Eating, which – given the previous post noting, among other things, the centrality of food to the American lifestyle and how visitors from other countries tend to highlight that centrality in ways that are not obvious when you’re living in the middle of it – was rather annoying.  As one of the great punk rock songs of the early 1980s put it, “I like food.  Food tastes good.”

When I am recovered from this I am going to go Full American on the food supply.  Yes, indeed, I am.  There will be Gluttony.

I was allowed to have all the clear liquids I could handle, as well as jello as long as it wasn’t red, blue, or purple because apparently those freak out the doctors.  I’m not sure why green would be preferable here, but then my doctorate is in the liberal arts so there are mysteries regarding medicine to which I am not privy, no pun intended.

Well, pun fully intended.  You got me.  What can I say.

Does vodka count as a clear liquid?  It’s liquid, after all.  And clear.  Someone should look into this, I think, and get back to the rest of us.  I am fairly sure a large quantity of vodka would have made the day much more pleasant as long as someone remembered to hide the snack food from me once the munchies set in, since I wasn’t allowed such things.

And then I had to drink The Liquid.  There is a reason why this stuff is only available by prescription and that reason is that nobody in their right mind would consume it voluntarily.  Of course I think the same thing about sushi and that is readily available over the counter in this part of the world, so what do I know?

Every time the hospital staff would call me to check me just much that further in (it’s an incremental process, apparently, requiring at least four calls – ask me why health care costs so much in the US sometime), the person on the other end wanted to know my religious preference.  I’m not sure what this has to do with my Medical Thing.  I finally asked and they said that they need to know who to call if something goes wrong.

Um, perhaps a doctor?  Maybe even the one already there?

So I will be heading in for Medical Treatment very shortly.  And then I will be sleeping, if what they tell me is true.

Hope all went well yesterday and that it'll be years before you need to do it again.

Everything came back pretty well, with the admonition that I need to eat more fiber than I do. So I'll be headed over to the cardboard recycling center soon for some snacks.

My wife has done this very thing three times in the past eighteen months (give or take) and sends her sincerest, ummm, [whatever may make you feel like you've not suffered alone] wishes along to sooth your, ummm, path. Path is an appropriate medical term, isn't it?

Cardboard may be a little ambitious at first. You may want to start out with newsprint. Just sayin'.

Salsa may help, if homemade and applied copiously.

No hair on fire, just a warning that things that run in the family tend to run in the family and if I wish to avoid them I'll start chewing on twigs sooner rather than later. Fortunately I genuinely like those gritty Scandinavian rye crackers, so I now have an excuse to eat them in bulk.

Newsprint tends to stain on the way out, though.

Thank you to your wife! Much appreciated. :)

"Newsprint tends to stain on the way out, though."

Not enough bleach in the world to get that vision out of my eyes.

I am so NOT going to ask how you would know that ...

PS: In other news: the Oil Well fire only burned to with in 1,552 feet of our house - evacuation only lasted six hours but we didn't burn (unlike 8 of our neighbors. Taking my 70 ft. long semi cross country through the sage brush was a rather interesting experience. Really would like to avoid doing that again.

Yeah, there is some knowledge humanity is just not meant to have.

That's a disturbingly precise measurement for a fire like that! I'm glad you're okay! And yes, perhaps under more controlled circumstances I would like to see you drive a semi across sage brush, but I think I can just live with the mental images if it comes to that. Take care out there, Lucy -