Report from the County Fair, Part 2: Places and Projects

There are four basic areas to the Fair.

On one end there are the animals, and I’ll get to them in the next post.

Next to them are the vending areas, where the food stands and the cultural booths and the tents selling gutter repair services, farm equipment, and other things you didn’t know you needed until someone told you about them are located.  The two main political parties always have tents, conveniently located Not Next To Each Other so as to cut down on the trash talking.  For the last two years the GOP tent has had a grand total of one Trump sign, displayed with all the enthusiasm of a contractual obligation, which tells me that they haven’t completely lost their marbles, just mostly.  The Democrats tend to look much happier, which is odd considering how utterly marginalized that party has been since 2011 here in our petit dictatorship (seriously – North Korea thinks Wisconsin has taken the whole “one party state” thing too far).  The local radio station also always has a tent, as does the newspaper.  Home Campus used to have a tent, back before our budgets were slashed to make room for giveaways to the already wealthy.  The library always gives out free temporary tattoos from their space under the grandstand.  If you go to the grandstand area, there’s music.

The food stands are always fun.  There are places to get fried things, places to get fried and sugar-coated things, places to get things that aren’t fried but might as well have been for all the nutritional value they contain, places that will sell you things on a stick, and if you look hard enough there is a place where you can get a salad.  For an extra two bucks they will slather it in gyro meat, so whether this counts as healthy or even non-lethal is kind of an open question.  The Farm Bureau tent will also sell you a liter-sized bottle of soda for $2, which is a pretty good deal at the Fair.  We ate a lot of meals at the Fair this year, as we always do.  A couple of mornings when I dropped Lauren off early to take care of her animals we had breakfast at the church tent that opened at 6:30am just for those who have to take care of animals.  It’s a nice quiet time to be at the Fair with your child, really.  And on Friday our friends Heidi and Travis came down for the evening, so we had dinner (at a picnic table carved with the names of two other friends – living in a small town has its advantages!) and went around to see the various animals. 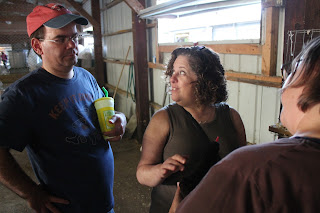 There is also a cream puff stand, because there has to be a cream puff stand at every county fair in Wisconsin.  There’s a law or something.  And you want it to be a law, because otherwise you might miss out on all that cream puff goodness!  These aren’t the World’s Best Cream Puffs – those you have to get from the guy who sets up at the dry cleaner these days – but they were Darn Tasty Cream Puffs nonetheless.  They also sell eclairs (or, as the “get one free” coupons handed out at the Fair this year had it, “Eau Claires” – the world can always use a few more copy editors).  We served our time volunteering behind the counter, since the stand benefits the 4H. 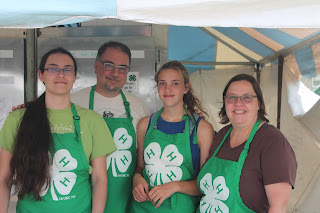 You will never go hungry at the Fair, though you may die of scurvy.  But then that’s what the lemonade stands are for, so if you do it’s your fault.

Next to the vending area is the midway, which this year seemed to specialize in handing out vast stuffed animals the size of garden sheds – I must have seen three or four of them being hoisted about.  Mostly this area is the province of the young, either small kids with parents at the smaller rides or teenagers conspicuously without parents at the bigger rides. The music volume is set to “Stun” so as to drown out the buzzing of the hormones.  It’s too loud and I’m too old, but not so old that I don’t remember those days fondly.

And finally, on the other side of the midway, there are the projects.

There are three buildings at the Fair that get filled up with projects every year – the Curling Building, now with the ice melted off (it bothers Tabitha no end, seeing all the dirt people track into what would in colder times be a clean sheet of ice), the Cat And Rabbit Building, where the Fun Days are held, and the Other Building, which sits at the very edge of the fairgrounds and nobody quite knows what goes on there other than the week of the Fair.  Not many people go in there during the Fair either, come to think of it.  It’s usually pretty quiet.  If you're looking for a break from the energy at the Fair, the Other Building is a good place to hang out for a bit.

Tabitha and Lauren had projects in all three buildings.

The Curling Building hosts the Drawing and Painting projects, as well as the Visual Arts projects.  It has a whole lot of other projects as well – Woodworking and Rocketry being the most obvious to me (no, they don’t fire off the rockets inside the building, though I’d pay money to see that), as well as a few others that sneak in there that I always miss – but Drawing and Painting and Visual Arts are the two that Tabitha chooses, so those are the ones we focus on.

Visual Arts was the easy one this year as far as the judging process went, though it was one of the more difficult in terms of “time elapsed between completion and judging,” which could be measured in minutes.  For this project, Tabitha chose to do an abstract set of antlers, and the judge was sufficiently taken by them to award her a Top Blue for it.  Top Blue means that it’s eligible for Merit, though others eventually claimed that distinction.  Still – impressive! 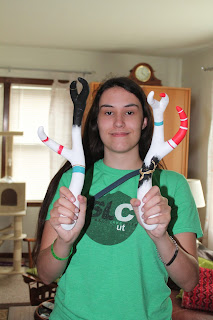 Drawing and Painting turned out to be much more complex, mostly because Tabitha had to work that day.  She had three works to be judged and had to be at work 20 minutes away, all by 9:45am, and you never know how much of a line there is going to be at these things.  So she got there well before the judging started and was number 5 in line, and it all went well.  Her employers had no cause to complain. 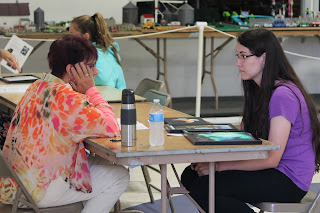 First up was her digital art project.  Tabitha loves digital art, and she spent most of a week on this one.  She had a model for it but built the whole thing from scratch in Photoshop, one painstakingly created element at a time, and it turned out pretty well, I thought. 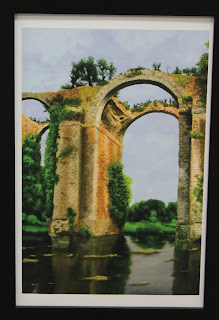 Unfortunately for her, the judge she got was a digital artist by trade and therefore exquisitely sensitive to the sorts of things that perhaps could have been done differently when it comes to digital art.  Hey – sometimes you get judges that are impressed easily, and sometimes you don’t, and that’s how life works.  She ended up with a red ribbon for it, which is a nice achievement still.

She also got a red on her mixed media painting, in part because it bowed on her because of the watercolor and in part because the frame I got was just a shade too small and we couldn’t get rid of the bowing.  Lesson learned.  Still, a lovely work. 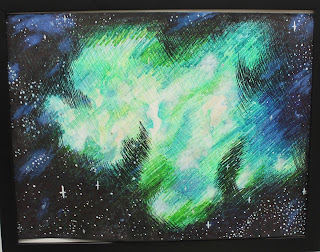 Her acrylic painting got a Top Blue, though.  It was based on a goofy pencil sketch she did in art class this spring that seems to have taken on a life of its own.  She now has it in several different versions, but this one is the most filled in. 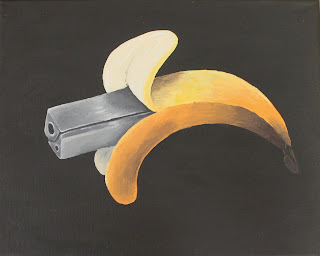 Lauren’s Fair is mostly about the animals, but she did have a project in each of the other buildings, both of which she had to ferry over herself in between working with her pig.

She got a blue ribbon for her Houseplant in the Other Building.  There isn’t much to say about this one – she normally keeps it in her room at home, and tossing it in as a project seemed like it might be fun and it was.  So there!  Branch out, kiddies – you may be rewarded! 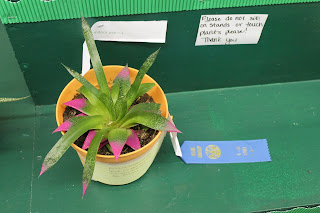 Lauren’s main non-animal project was photography, which was in the Cat And Rabbit building.  This project is where the shortcomings of in-fair judging were most obvious, since the photographs were submitted Tuesday and hung for people to see, then taken down and judged on Thursday, then rehung (with ribbons) for people to see on Friday, which is a lot of up and down, really.  But that’s the system they had, so that’s the system we worked with.

She had two different works in Photography.  One was a collection of four color photos of different things – a landscape, a person, an animal, and a building.  She ended up with a red for this one, though with Danish judging you never know if that was because the images needed improvement or if the judges had simply filled their quota of blues (or whites) that could be given.  Danish judging is a numbers game that way, and you don’t get to talk to the judges to ask.  The Danes are supposed to be a happy people and you’d think they could come up with a better judging system than that, and perhaps that explains all the aquavit.  Red is an achievement, though. 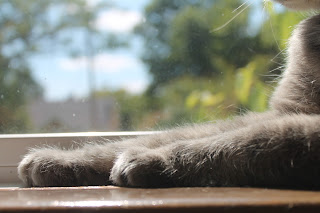 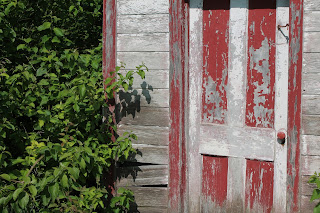 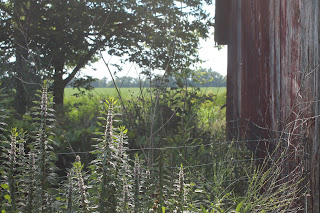 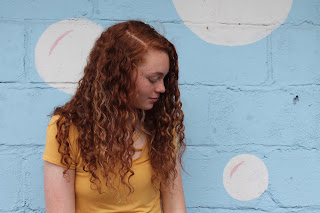 The cat picture is my favorite of these, which should surprise exactly nobody who knows me.

Her other work was a collection of four color photographs of the same object, which in this case was the remains of what may have been an old weather vane tower out at the farm where we keep our poultry.  She does have a good eye for an image!  And it helped that this was a face-to-face judged event where she could explain things to the judge.  She got a Top Blue for this collection.  Impressive! 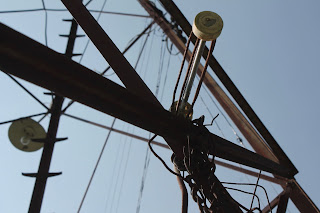 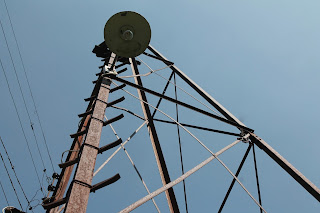 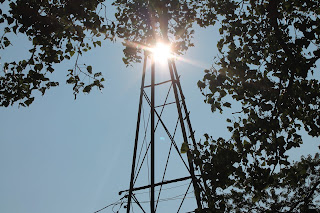 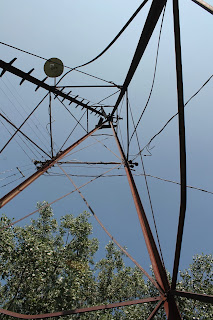 I am proud of my daughters.  They do good work.

The tower is for an old windmill that is no longer there. Cool angles and light!

You, sire (and let us not forget your wife), have good reason to be proud.

Indeed I am very proud of them, as I ought to be.