It was a music filled week, last week.  You need that in dark times, to remind you of good things.

On Wednesday there was the annual Dessert Concert.  The various orchestras and chamber groups of the high schools here in Our Little Town get together in the cafeteria of one of them for an evening of music and donated sweets.  For a nominal fee you can fill up a plate with as much sugar as you can hold if you go through a second time – they do ask you to limit yourself to three items the first pass through, so everyone can get some.

This sounds like a simple evening, but the logistics of it were daunting.

Kim had to stay late on campus that day and then get to the cafeteria early, as she had volunteered to be on set-up crew.  Kim’s parents were coming down for the show and an early dinner.  Tabitha had one of her clubs meeting after school.  And Lauren and I had to take care of her chickens.  The short version is that we ended up going out to our local burger joint for a quick dinner and getting something to bring to Kim while we were there.

This sounds simple until you realize that while Tabitha had to get there early for call, the rest of us did not.  But Tabitha can drive herself over, you say!  And yes, yes she can.  Except that she inherited her sense of direction from my mother, and when we watched her sail off from the burger joint parking lot in precisely the opposite direction from where she needed to go, we figured it would be a long night.

But we live in an age of miracles – of cell phones with speaker phones, and GPS – and surprisingly enough everyone ended up where they needed to be with plenty of time to spare.

It was a lovely evening, even if my capacity for sugar is nowhere near what it once was.

There were warm-up acts – a few solos or small groups from the various high schools, including the Local Businessman High School chamber orchestra, of which Tabitha is a member.  And all of the orchestras did their bits well.  We were even close enough to hear them, as cafeterias are not known for their acoustics. 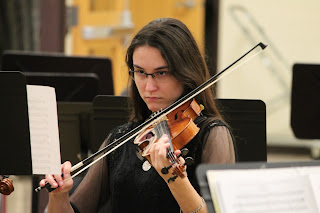 Thursday was the Honors concert.

The Honors Band and Honors Orchestra are volunteer groups.  You get nominated by your conductor, if they think you’re good enough and have enough of a work ethic to make it worthwhile, and you get to say no if you disagree.  Tabitha was chosen for Honors Orchestra as a violist (her second instrument, after the violin), and Lauren was chosen for Honors Band on percussion (one of her many instruments over the years).

For the last six weeks or so they have headed over to the other high school in town every Tuesday evening for rehearsals, and last week was the big show down at the Performing Arts Center here in town.

Naturally the weather turned.  It was 74F here on Wednesday, but by the time we got to the concert on Thursday it was actually sleeting.  Not that it made any difference to the crowd.  One of the nice things about Our Little Town is that events like this are always jam packed with audience members.  It’s good to see people support their kids this way.

And it was a lovely concert, as you would expect from a selective group of performers that way.  The orchestra went first, then there was a big combined number, and then the band finished up. 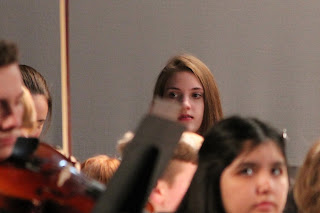 I am proud of my daughters.
Posted by David at 9:15 PM