1. It’s been that kind of month, the kind where not only am I far too busy for my own good (which separates me from most people not one whit, I know – free time has become un-American) but I find I have very little to say even when I do have time.  Nevertheless, things happen and since this is where I write that stuff down, I will do so now.

2. It has been a summer of home repair projects, most of them enacted by Kim.  I regard home repair projects as a form of dentistry – something that will probably be good for me in the long run but which gives me no pleasure and from which I derive no satisfaction – so Kim has learned that while I will do my part, it’s best just if she just does what she wants without asking me my opinions.  I have no opinions worth listening to on such things.  Also, that if she just ignores my muttering and complaints they will go away leaving no lasting harm to anyone – honestly, even I don’t remember them afterwards.  They’re just therapy for me, and not to be taken seriously.  So we now have a new kitchen floor to replace the one that had begun to fall apart.  The kitchen has also been repainted, as has Lauren’s room (Lauren chose the colors and patterns, and pitched in with the painting, so now her long, low room is a light shade of purple with horizontal black and white stripes at either end – hey, as long as she likes it, because it’s going to stay that way for a while).  Our bedroom has new carpeting.  And Tabitha’s room will be repainted sometime in the near future.  Pretty soon I will no longer be able to find my way around the place by memory.  It will be a "George Washington's Axe" kind of house.

3. We spent an enjoyable weekend with some good friends of ours from out of town, running them ragged and showing them various Points of Interest here in Wisconsin.  We went to the Renaissance Faire, spent an afternoon at a waterpark, hosted our “Kind of Annual Whenever We Remember It ‘We Dare You To Eat That’ Party,” introduced them to our chickens (who do a marvelous job of cleaning out vehicles when spills happen, as it turns out – ask us for rental rates) and even found some time just to hang out and relax.  Also, we have decided that there needs to be a Culver’s in New York.  Good times! 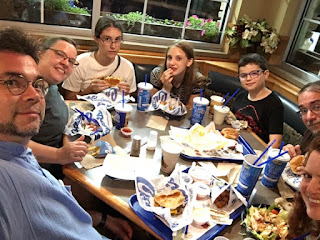 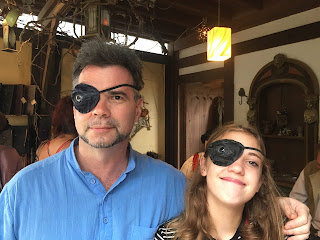 4. I have now finished the Game of Thrones books.  They’re very well written and worth the time, but I am ready to move on to other things.  Five thousand pages of one story is enough for now.

5. The contract year has started down at Home Campus, which means that I have spent much of the week in more meetings than are healthy for the human mind to endure.  All of them are well-intentioned, of course, and most of them even have useful information in them here and there.  I’m just not one for meetings.  I’ll be glad when it’s time to get down to actual work, or, more accurately, when I can get down to my actual work without maneuvering around all the meetings.

6. I have been doing my best to ignore the wasteland that is the presidential election this year, in large part because the mere idea that Donald Trump is supported by so many people is enough to give any rational human being hives.  I keep waiting for him to stop being a junior-high bully, to come up with a coherent policy idea (just one!), or to behave in a way that might possibly make him not a real and present threat to the survival of the American republic and global stability, and I keep being disappointed.  The man is an empty space out of which pours lunacy, and the fact that he is in the position he is in is a damning indictment of American culture.  At this point I’m fairly confident he will not win – frankly I don’t think he wants to win, which would explain a lot of his conduct – but a) this is the USA and nobody, no matter how bigoted, ignorant, dangerously unqualified, or flat out immature, can ever truly be ruled out for office until the votes are counted and the inauguration has taken place, and b) even if he does lose, he will go away but the millions of Americans who support him will remain and likely be emboldened by it all.  If that doesn’t scare you, you aren’t thinking clearly.

7. Why is it that when you tell people that you do not like beer they feel obligated to have you sample their favorite beers in order to try to change your mind?  “Here!” they say.  “This is the quintessential perfection of that thing you hate!  It will make you change your mind, because clearly you weren’t getting a pure enough version of what you don’t like!  Enjoy!”  It’s beer.  It tastes like fermented sweatsocks.  High quality beer tastes like high quality fermented sweatsocks.  Please put that away and fetch me a whiskey.

8. It is now easier for me to read my computer screen without my glasses than with them.  Methinks I need another visit to the eye guy, though I doubt my insurance will pay for one so hard on the heels of the last one.  Good thing we don’t have Government Death Panels.  The private ones are so much classier.

10. I spent a few days cleaning up my office at home in preparation for our friends’ visit, since it became a temporary bedroom and nobody should be forced to sleep in my office when it is in its usual state of upheaval.  Now that they have gone back home I suppose I should put back some of the stuff that I took out, but I’m kind of liking the extra space.  No rush, really.  Maybe this weekend.
Posted by David at 8:22 PM

A word from the "old eyes" department.

I have a pair of computer glasses that I wear while working on a computer (the majority of my work day). They're basically bifocals with a mid-range prescription in the center and my usual bifocal prescription in the lower section. They've made a HUGE difference in my ability to focus and end the day without a headache. And the good news is, since I only wear them at my desk, I can get WHATEVER FRAMES I WANT, no matter how groovy (or cheap).

I should probably look into that. My problem is that I can see the computer just fine without my glasses, which means I end up leaving them on the desk when I wander off to do something else in a world that has suddenly lost its edges.