Somewhere out there is a city planner or traffic control engineer who is being tempted into some kind of iniquity.  He (or she, I suppose) is staring intently at this tempting thing or contemplating this tempting action and thinking that the consequences of giving in to this temptation could not possibly be that severe, certainly not severe enough to warrant the kind of restraint that would lead to the temptation being passed by.  It would be worth the price, surely.

But what this planner or engineer does not realize is that the penalty for giving in to such temptation is to spend the rest of eternity driving around Appleton, Wisconsin.  For surely that would be the definition of Hell for any traffic control engineer or city planner.

It certainly came close to being mine.

We spent the weekend up in Appleton at a bonspiel for the girls, and it has to be said that the bonspiel itself was a great deal of fun.  Curling events usually are.  It was well run, the action was compelling, and the food was good.  Can't ask for more than that, really.

Curling, for those of you who haven't tried it, has a lot more going for it than just Norwegian pants.  It’s a very sociable sport, for one thing – there are fairly high standards of sportsmanship on the ice, and you are expected to hang out with the team you just played once the match is over.  And it’s surprisingly engaging, particularly if you know just how hard it is to get a 40lb block of granite to slide a hundred and fifty feet down the ice and stop within six inches of where you want to put it, quite possibly skirting around several other 40lb blocks of granite that were in your way in the process.  You can get lost in a curling match more quickly than you'd imagine.

We got there in plenty of time for a 10:15am draw on Saturday, and the girls’ team gave it their all. 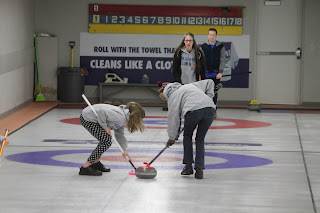 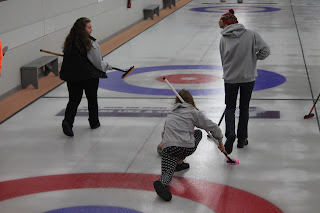 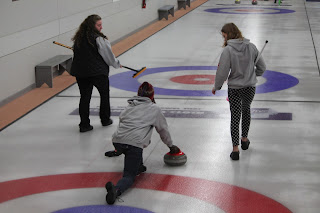 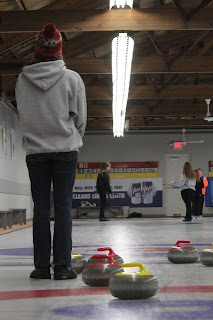 Sometimes this meant a bit more volume than you’d think was necessary on a Saturday morning, but then you’d be wrong.  Curling requires volume.  It helps the rocks move. 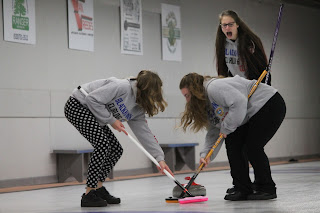 They lost their first match – after which there was social time and a nice lunch provided by the curling club there, while Kim and I checked into the hotel – and then won their second one.  Based on the tiebreaker task (appointing one team member to throw a single rock as close as possible to the button – which makes sense if you are a curler – and comparing the distances achieved), they ended up in the 3rd-place game for Sunday in the developmental side of the bonspiel.

Another team from our curling club played in the competitive side, by the way, and did fairly well.  I didn't keep track of them as closely, nobody on that team being a direct blood relative of mine, but I did try to watch when I could.

After the second match there was dinner.  Kim and I decided that we would take the opportunity to forage for ourselves, since the meal served was not something Kim could eat and the girls were quite happy not to have their parents looking over their shoulders for a while.  So we set out.

Imagine, if you will, a mall-sprawl area.  It is filled with shops, many of which are restaurants selling tasty things to eat.  It has frontage roads, theoretically to provide access to those shops, except that they look like driveways even when you’re on them and you can't really find them even if you know to look for driveways.  It has traffic lights, most of which are so closely bunched together that traffic backs up and it is difficult to turn onto roads.  This is because there is an intense amount of traffic in what is clearly the regional shopping center for a four-county radius.  There are also median strips randomly placed here and there that make it impossible to turn left from what seemed like all of the possible left turn options.  The upshot of all of this is that if someone locked you in your car and refused to let you out until you were legally parked in front of your destination it would be entirely possible to starve to death within sight of half a dozen different restaurants.

We ended up eating at a restaurant that was maybe a hundred yards from the curling club.  If we had been willing to clamber over the four-foot-high snow drifts (and known ahead of time that we'd end up there), we could have walked there in less than five minutes.  Instead, it took us 25 minutes to drive there.  Granted, some of that was looking at a different restaurant directly across the street from the one we ate in, but still.  It was across the street.  And getting back across the street involved a detour under the highway, through the mall, and into the parking lot of a neighboring hotel, and even that could only be accomplished with GPS help.

Eventually, fully fed and rested, we headed back to the curling club, picked up the girls, and embarked on the half-hour journey to our hotel, a quarter mile from the club as the crow flies.  The team had its own room, while Kim and I shared an adjoining one.  We’d stocked up on snacks at the Weird Food Emporium that afternoon, between matches, and many of them found their way into their room that evening.  We also found ourselves in possession of a bushel of fried cheese curds, none of which would see the morning light.  So it was a good night all around.

We went back to the curling club Sunday morning for the final draw.  They gave it a good run and made some really good shots, but the other team made some even better shots and so our heroes ended up in 4th place overall, which is not bad really.  And they had a great deal of fun, which is more important anyway 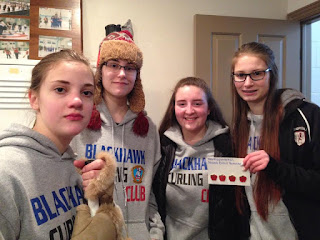 We’ve still got a bonspiel or two left in the season.  We’re looking forward to it. 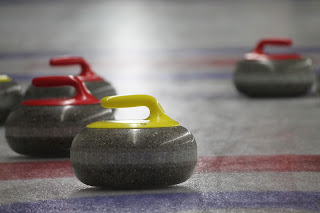