A Long Leap from Lambeau

I’ve been a fan of American football since the Nixon Administration, following my hometown Philadelphia Eagles through their years of futility and occasional competence.  And I’ve become a Packer fan by marriage – they’re a team that seems to know how to build a winner without stooping to the depths of depravity the way some other teams do.  They’re fun to watch.  I cheer for them as long as they’re not playing the Eagles.

And even as it gets harder to watch football every year, as the health implications of large men repeatedly running full-speed into other large men become more and more clear, I still enjoy the game.  At some point this may no longer be true, but for the moment it still is.

We went to a local chili-tasting contest tonight – a fund-raiser for a worthwhile charity.  I like chili.  I like the cause this charity represents.  I like the friends we went with.  It seemed like a pretty good thing to do on a cold Friday night in February.  So we went.

The celebrity guest judge for the chili contest was Leroy Butler, who had been a safety on the Green Bay Packers through the 1990s and won a Super Bowl with them.  He’s the guy who invented the Lambeau Leap – that jumping into the stands at the back of the end zone that it seems everyone now does when they score in Green Bay.  I remember watching him play – he was a remarkably talented player in the position I always thought I’d like to play if I were far more athletically talented than I actually was.

When we played football when I was a kid I was always in the defensive secondary if I had any choice in the matter.  Some kids wanted to be the quarterback, in charge of the show, and others wanted to be the running back or receiver – the glamour positions, really.  Not me.  Why go to them when they will come to you, I remember thinking, and why get hit when you can be the one doing the hitting?

We walked over to his table at some point early in the proceedings and got our picture taken with him.  He was very gracious and well-spoken, and he talked with us for a bit while we were with him.  For a man who made his living knocking people down he certainly seemed pleasant enough. 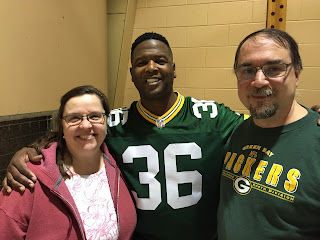 The chili tasting went well, by the way.  You pay your entry fee and get an envelope full of tickets and each little bowl of chili you sample costs you a ticket.  You get tickets enough to try them all, and then you vote for your favorites.  There were a couple of good ones, but mostly it made me appreciate my own chili.  Chili is rather personal that way.

At some point the host brought Mr. Butler up to the microphone and invited people to come up and ask him questions, which he would answer.  You could tell that the “how did you come up with the Lambeau Leap?” question was an old favorite, and he had a long and entertaining story to go with it.

Toward the end I decided to walk up and ask, “When you were playing, who was it that you’d look across the line of scrimmage and say to yourself, ‘Oh, no – not THAT guy’?”  His response was immediate: “Barry Sanders.”  It was, he said, like trying to tackle a bar of soap in a bathtub, and he told a story of watching Sanders run directly at one of his teammates, stop on a dime, pirouette around him, and head off down the field for an 80-yard touchdown.  “Better you standing there than me,” Butler told him, knowing full well how easily it could have been him.