It’s been a busy time, and I’m just going to catch up here.  Because I can.

1. School has started.  This means that we have to get up early again, all of us.  This has not been greeted with universal acclaim.  Honestly, it hasn’t been greeted with any acclaim.  But so far the school year has treated the girls nicely, and if the various campuses where Kim and I are this semester have borne the brunt of the assault by Governor Teabagger (a wholly-owned subsidiary of Koch Industries) and his presidential ambitions, well, at least we’re among good people and in good company.

2. It has been a source of immense joy to see that Governor Teabagger (a wholly-owned subsidiary of Koch Industries) is doing a bang-up job of flaming out miserably on the campaign trail.  He’s a void in human shape, kept inflated only by the material pumped into him by his puppet-masters, and quite possibly the worst campaigner in the GOP field, which is saying something.  Even people on his side are pointing out how unfit he has proven himself to be, and the foreign press (who must be watching American politics with unmitigated horror, given that somebody in this field of bozos will be the nominee of a major political party and have a good chance to set American foreign policy going forward) has been merciless.  My favorite comment so far was from an unnamed GOP insider, a professional in the field, who said that he was essentially watching the Milwaukee County Executive run for president.  Amateur hour, in other words.  How this sock puppet managed to win three elections in Wisconsin is therefore both mysterious and not a little suspicious, really.  But for the moment I will take heart that he is demonstrating his true lack of qualifications and dying in the vine.  He is the single most dangerous candidate running, bar none – even The Donald would be less harmful to the survival of the republic – and the nation is well served by him sinking back into the swamp from which he emerged to consume the brains of the living five years ago.

3. It’s finally autumn weather here, which is nice.  Last week it was high summer, with temperatures in the 90s Fahrenheit, and that’s just wrong on so many levels.  I was not meant for summer.

4. My college friend Tiffany came out to spend Labor Day weekend with us, and it was just lovely to see her again.  We hadn’t seen each other since 1990 or so, and that was too long – I’m glad she took the initiative and came out.  I’m looking forward to returning the favor.

5.  We kept her busy while she was here, because that’s how we roll.  We hit the Thresheree, the Renaissance Faire, and Madison.  We had her try deep-fried cheese curds because Wisconsin.  We had Tabitha give us a tour of the museum.  And sometimes we just hung out and caught up, because the joy of old friends is the comfort of being able to do not much at all except be with each other. 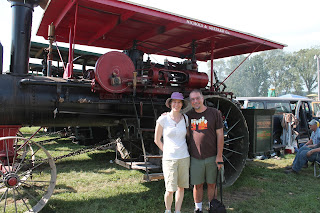 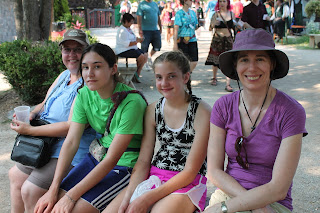 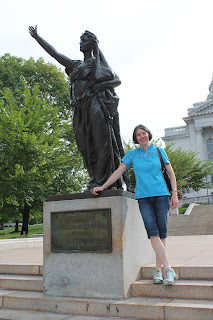 6. Tabitha and I went to the local library’s Princess Bride quote-along screening today.  There is never a bad time for The Princess Bride.  It is astonishing how many quote machine movies Christopher Guest has been in.  We said the lines along with the crowd and waved our inflatable sword and had a grand time.

7. My doctor assures me that I am about as healthy as he expected me to be, which is probably a good thing.  So I don’t have to go back for another year, which is definitely a good thing.  Except that next year I will have hit the magic half-century mark, and this means there will be one of those fearsome –oscopies that men of my age have to have in order to remain as healthy as expected, and that will definitely be a bad thing from my perspective even if it is a necessary thing.  When doctors pull out rubber gloves, it is best just to stay calm and endure.

8. Less than a week to the new Doctor Who season.  Life is good.

9. I finished the last Terry Pratchett book – The Shepherd’s Crown – last week.  It was a bittersweet thing to read, knowing that there are no more to come.  You could tell that it wasn’t quite done – had he survived it probably would have been half again longer – but it was a Tiffany Aching book and that’s a good thing.  He had said that he was done with her character after the fourth story, and I’m glad that he revisited her one last time.

10. The semester is only a week and a half old and already I am a class behind in my upper-level course.  On the one hand, this means that the students are digging deep into the material and keeping me from sailing forward, and that’s education for you.  On the other hand, well, I’d like to get to the end of the syllabus by December, so there will be some editing going forward.  I don’t get to teach upper-level courses much – they’re reserved for the tenured people most of the time – so I’m enjoying it.
Posted by David at 5:25 PM

I dunno. I almost fear Senator Cruz more than Governor Teabagger. Actually, I guess there are very few candidates that aren't crawling around the bottom of the barrel.

There aren't many on the GOP side that don't give me the shivers thinking about them with their hands on the levers of power, and the ones that don't are so far down in the polls that they might as well not have thrown their name into the ring in the first place. It says a great deal about the wretched state of both the GOP and the American people that such batshit insanity is not only tolerated but rewarded.

That said, Cruz doesn't scare me as much as Walker. I've lived under Walker's rule for almost five years now, and the national media doesn't report half the things he does. Cruz, for all his posturing, is sharp. He's a conman in for the long grift, and he knows that the way to secure his fortune is not to bring the whole thing crashing down. He'll bloviate and do some awful things, but he needs to keep his cash cow alive. Walker, well, you can't really call him a True Believer because he doesn't believe in anything other than his own ambition. He is owned by True Believers, though. He is owned by people who fundamentally do not respect either laws or Constitutions and who would rather burn the place down and piss on the ashes than see anyone other than themselves in power.

He has managed to destroy Wisconsin and convince half the state that it was their patriotic duty to sacrifice their future and that of their children to his lust for power. He will do the same to the rest of the country, given the chance.

No, Cruz needs me as a mark. Walker would rather see me burn.