Ding, Dong, the Campaign is Dead

We went out and celebrated.

When the news came down the internet that Governor Teabagger (a wholly-owned subsidiary of Koch Industries) was bowing out of the presidential race, it really wasn’t a surprise.  He’d been polling at 0% all week, after all, and even if the margin of error was about 2% on those polls, that still means that mathematically he could also have been at -2%.  I’m not sure what that translates to in real terms – perhaps that 2% of the GOP base would rather vote for Bernie Sanders than this guy.  But it was clear that he was on his last legs.

I worried anyway.  People like that, people with no principles beyond what they are paid by their puppetmasters to have, people whose careers have been defined by soulless ambition and ruthless immorality, people like that have a way of hanging on, of surprising the mass of decent humanity with their powers of recuperation.  And given the money that the Koch Brothers had paid for him, I expected them to make more of an effort to save their investment.

But rumors began to fly yesterday about staff layoffs.  And today when I got back from picking up Lauren from school, several of my friends had tagged me with articles announcing Governor Sock Puppet’s withdrawal from a race he should never have been anywhere near to begin with.

I can’t say I’m overjoyed so much as I am relieved.

Scott Walker is gone from the national stage, for the moment at least, but the sickness that he represents in the body politic remains.  He is the poster child for venal ambition, for the petty vengeance of the cowardly on better men and women than they, and for the right-wing extremism that is rotting the foundations of the republic.  It’s still out there.

Seriously – one right-wing extremist today (a Patrice Lewis of the World Net Daily, and no I’m not going to link to that collection of half-witted radical fantasies – go find them yourselves if you truly want to abuse your intelligence) went on record calling for the US government to be overthrown by the military and then divided into Conservative America and Progressive America, since there is no other way for right-wingers to get what they want.  They fundamentally despise democracy.  They have no respect for the Constitution.  They hate everything this country stands for, and they have the gall – the unmitigated horror-show arrogance – to call themselves patriots and criticize everyone else as not real Americans.

Why this woman isn’t being prosecuted for subversion right now is an interesting legal question.

In a just world, such people would have been confined to padded cells and kept away from anything sharper than a banana years ago.  But no – they’re out there, cluttering up the nation’s airwaves, running for office, and reducing the average intelligence of the nation simply by continuing to breathe.

That’s what conservatives are reduced to these days.  Caricatures and insanity.

I feel bad for genuine thinking conservatives.  I know a few of them.  They’re good people, even if we disagree on many things.  Nobody represents them anymore.  I tell them, “welcome to my world.”  Nobody’s represented me for a while either.

I’m glad that the nation will be spared the unanaesthetized brain removal surgery that would have been a Walker administration.  The man was by far the most dangerous candidate running as far as the long-term survival of the republic was concerned, up to and including The Donald, and anything that that keeps him out of the Oval Office – even as a tourist – is by definition a good thing.

On the other hand, this is a guy whose entire career has been defined by overweening ambition and ruthless petty vengeance against those who have crossed him, and I fear for Wisconsin.  He’s back, he’s angry, and like any sociopath he has no conception that any of his ills were his fault.  He’s already on record blaming others for his fall.  We will pay for the wisdom of the American people in rejecting him, no doubt.

America, as you celebrate your Walker-free future, remember us back here in Wisconsin.  We took the bullet for you.

Actually, I don’t really expect him to finish out his term of office.  He’s still got three years remaining in office and nothing to do other than exact retribution and really, how long will that take?  He’s already gutted the state.  There’s not much left.  I’m assuming the GOP will kick him upstairs to corporate HQ and settle him in with a nice little hot-air factory of his very own on Fox.  He can brag about facing down all those nasty, nasty protesters there, and the gullible will believe him and send him money.

Although I was one of those nasty protesters, as were my daughters, and a politer group of people I have never been in – I’ve been in rowdier grocery lines.  There were people walking around with plastic bags collecting trash.  There were singers.  There were children.  It wasn’t exactly a riot.  Also, now that I think about it, I never saw Governor Teabagger (a wholly-owned subsidiary of Koch Industries) the whole time I was there.  He spent his time hiding in the tunnels under the Capitol, scurrying in and out like a rat.

A legend in his own mind, that one.

But his future lashing out is still to come, so tonight we cancelled our dinner plans and went out to celebrate our governor’s fall from the national stage with food and drink.

You grab what good there is in the world, and run with it. 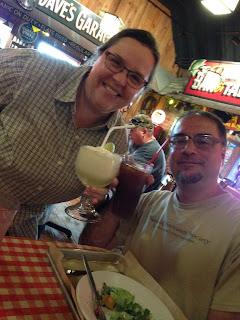