Running Around in Circles on Purpose

There’s a reason they don’t hold track meets in December.

The whole point of track is for people to try to get from Point A (defined as next to the guy with the gun) to Point B (defined as way over yonder, presumably far away from the guy with the gun, which is pretty much always a good idea under any circumstances, but – particularly in your longer races – not necessarily that far away after all) as quickly as possible, under your own power.  It’s just you, your feet, and the open space.

And a milling crowd that insists on wandering onto the tracks like suicidal cows in a railyard.

The thing about this is that it helps not to be overly encumbered while doing it.  You get some shorts and a tank top, and the lightest shoes you can find, and off you go.  Hell, the ancient Greeks used to run their track meets naked, which is probably taking the whole “weight to power ratio” thing just a bit more seriously than perhaps is warranted.  Trying to run in a parka and furry boots is just a no go.

It’s a summer sport.  That’s all there is to it.

But tell that to the good people of Wisconsin, for whom summer is something that happens between the Fourth of July and mid-August.  Schools are out of session then.  So if we are going to have track meets at all, we have to have track meets in what passes for spring in this part of the world, when the snow flurries have tapered off by as much as several hours prior to the beginning of the festivities.

Also, they sell hot chocolate at the concession stands, which never hurts.

Lauren decided to join the track team down at Mighty Clever Guy Middle School this year.  I heartily approve of this, as it is both good exercise and a continuation of a family tradition that stretches back to her grandfather on my side of the family and at least to Kim on hers.  They’ve been practicing after school for a while now, and today was their first actual meet.

Oh, they had a “scrimmage” last week, but Lauren rather pointedly insisted that our attendance was not necessary and assured us that none of the other parents would be there either.  We’ve reached the point were we’re more embarrassing than it is worth, apparently.  Of course we were just about the only parents who didn’t show up, so for this meet we decided that we’d attend, embarrassment or not.

It was warmer last week.

Lauren was scheduled to do the high jump and two relays – the 4x100 and the 4x200.  This meant that she had successfully convinced her coach to let her out of the hurdles.  I understand this.  As a friend of mine once said, it’s bad enough they make you run all that distance but then they put things in your way?  No.

We got there as they were warming up for the high jump, and Lauren did her thing there. 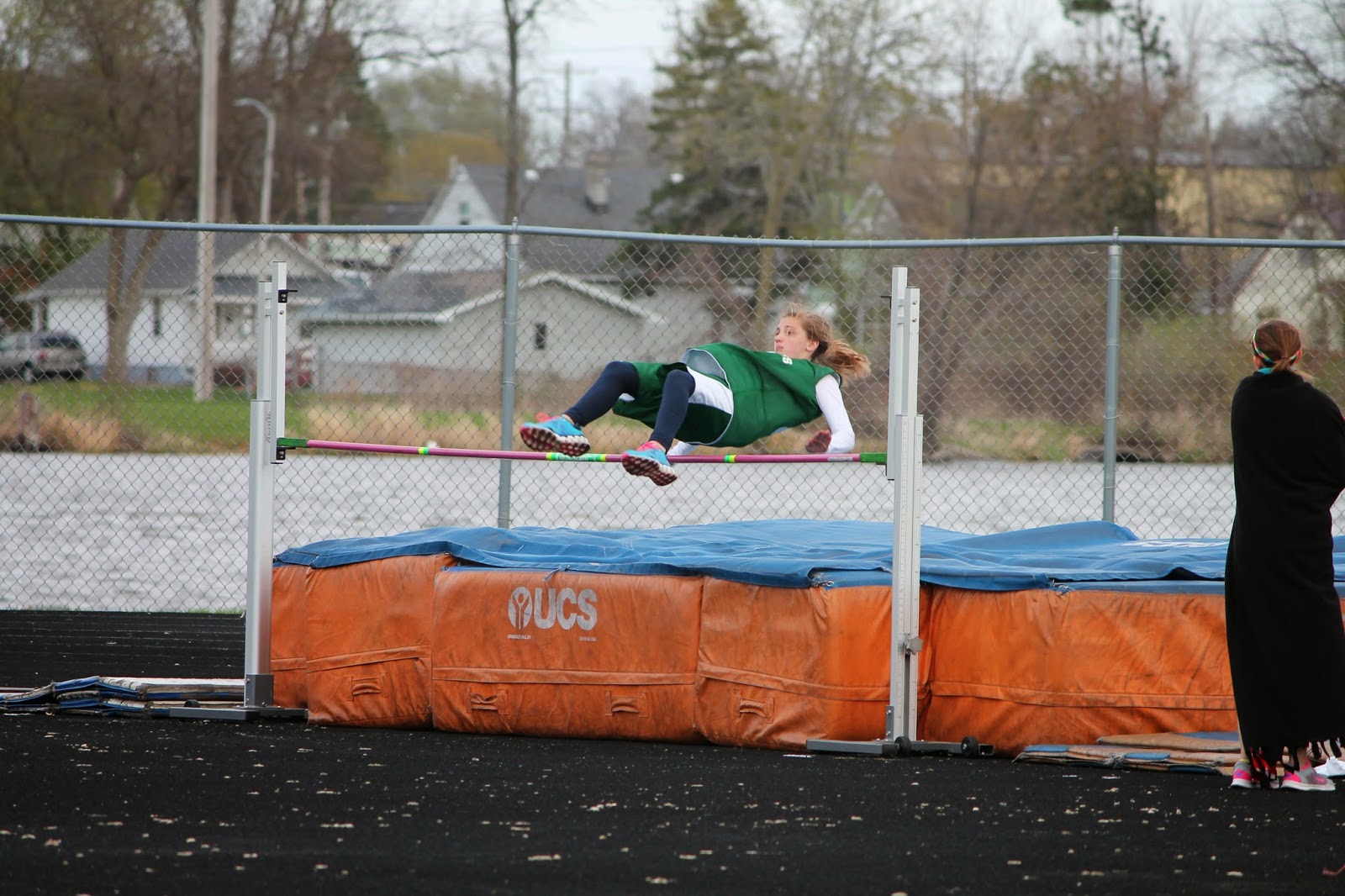 And eventually they got around to the 4x100, where she ran the anchor leg for her team. 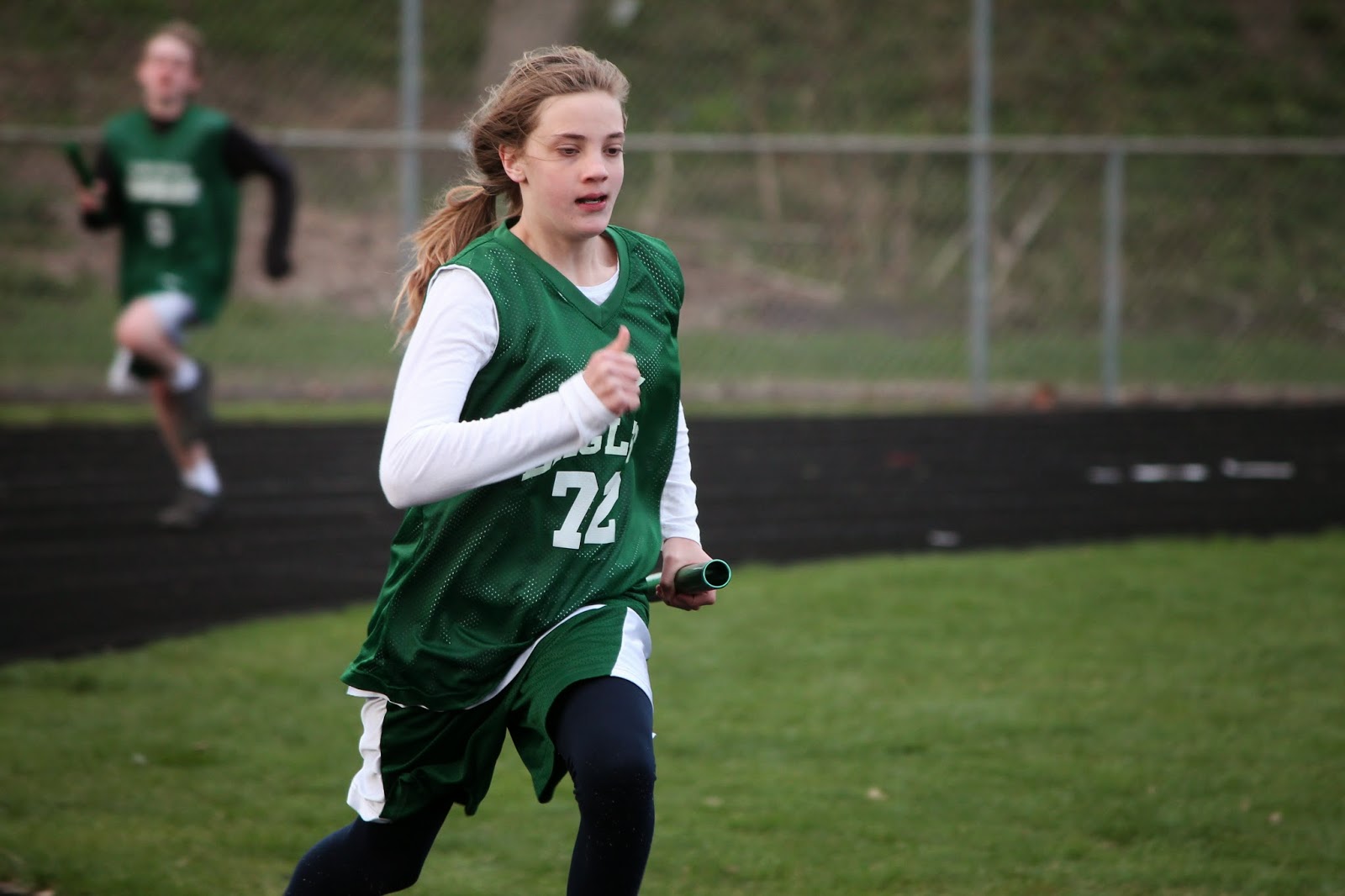 It gave me serious flashbacks to my own time on my high school track team.  All I will say about my experience on the 4x100 relay team is that I was single-handedly responsible for the following week’s intense focus on baton passing.  I didn’t last long on that team, really.

She never did run the 4x200 – apparently there was some miscommunication and her team got scratched – but that just meant we could go home and thaw out that much faster.

Track was the only think I consistently loved through my four years of high school. I ran the 800M, and thought it was the perfect distance. Not an all-out sprint like the 400, but not long enough to get bored, like the 1600 and 3200. :)

My perfect distance would have been a 2m race. I would have been state champ. Nobody on that team could beat me out of the blocks, but after two or three strides there would be this wooshing sound as they blew by me. Alas.

I tried to run in high school. I'd rather swim three miles than run one. That was the end of that.

Yes, I remember you were a swimmer. :)

My downfall in track came gradually. The coach would always tell us, "Go warm up and run a mile." And I would be out there thinking, "There has to be a pace at which I can go for a mile without getting tired." And then it hit me - yes, there is. It's called "walking." That was pretty much the end.