The Song of the Turkeys

I've been trying to write a post about the current foreign policy idiocy of the Teabagger intelligentsia, a group of subversives whose feeble grasp of law, Constitution, and basic foresight and planning has never been more starkly displayed than this week, except that it has been very difficult to keep up with the flaming stupid.  Every day there is more, every bit more is just that much less credible as something a human being capable of walking erect would even consider let alone actually do, and every revelation is more insulting to the dignity and corrosive to the survival of the American republic.  This is a group that needs to be removed from power, heavily sedated, and kept away from sharp objects and writing implements for their own good and the greater good of the nation and the world.  I'm still working on that post, but in the meantime life is happening all around me and I'm going to write about that for a while.

The turkeys were singing last night.

Ordinarily this would be a metaphor.  I could be talking about the neighbors, or the cloud of young men who infest Our Little Town with their glass-packed 12L 6000-horsepower 4x4 Compensators, reminding us all of their shortcomings in the wee hours of the night.  I could be talking about the mentally deformed members of Congress who have emerged from out of their dark caves to make the US a more unstable and dangerous place or their supporters, who stand in stark disproof of the theory of natural selection, which if they understood that they'd find ironically cheering even if the rest of us just tremble at the thought of them having free and unfettered access to firearms.  I could be talking about a lot of things.

But no, I'm talking about turkeys.  Actual, literal turkeys.  Feathered things, not that bright, generally roasted for Thanksgiving.  The things that Mr. Carlson swore, as God was his witness, he thought could fly.  Six of them in fact, in their infant stage and currently residing in my living room.

Spring is in the air here in Baja Canada, and this means it is time to gear up for another round of 4H events.  The Drama group is rehearsing on Tuesday nights.  The Cat group is doing whatever it is they're doing, though without us this year as neither of our cats will survive another go-round of that.  Art and Photography projects are a-borning.  And Lauren is restarting her Poultry project.

You can only show chickens once in the 4H, unless they're layers - and then all you're really showing is the eggs.  So last year's birds have been retired from the fair.  We still have five of them out at our friend's barn - three hens (Venus, Puff, and Rocky) who have been supplying about 90% of our egg needs since last fall, and two roosters (Sully, the special-needs chicken, and Rosie, my personal favorite).  The others have either been sent off to other flocks, or, sadly, are no longer with us.

Lauren has a long list of chickens she wants for this year, representatives of many breeds and varieties, but we have been slow in acquiring any.  Thanks to a number of obstacles, including an incubator failure at the farm where we buy most of the chicks we get, we were limited to two Sultans.

Why we needed two more Sully's I don't know.  Perhaps the three of them together could come up with a dozen functional brain cells, but I doubt it.  If there were any breeds I didn't think we'd be revisiting after last year it was Sultans, but there you go.  That's what they had, so that's what we got. 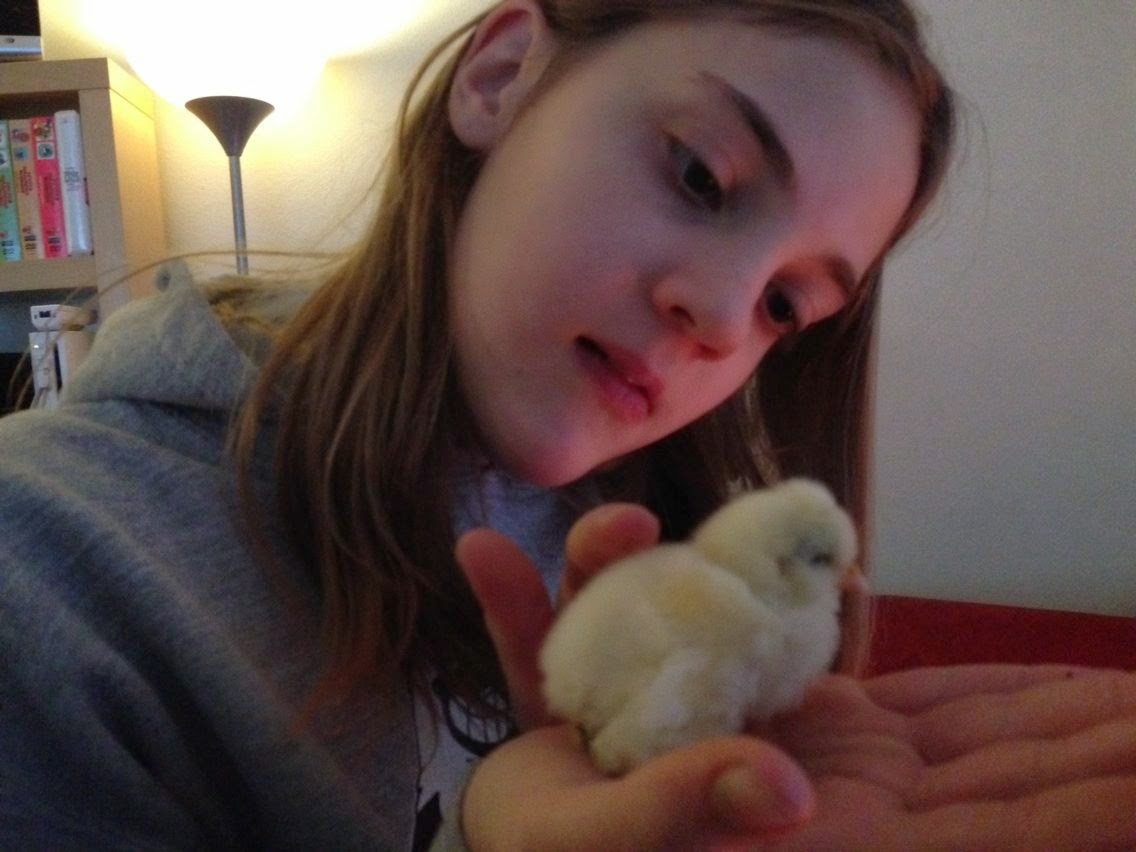 The two of them were doing fine in their little bin in the living room.  The cats are used to this routine by now and don't really trouble them.  And they are fairly quiet.  They've been there a week or so, now, doing whatever it is that chicks do.  We got them a mirror and they have had a grand time pecking away at the other birds who keep coming up to them.  And you know what?  Every single time they hit them right in the beak!  Every time!  Who knew such a thing?

Then last night Kim and Lauren went back to the farm and came home with six turkeys.

And one more Sultan, but I will skip over that lightly for now other than to ponder the general absurdity of life.

They're cute little things right now, those turkeys, all blotchy black and gold.  And they're small enough to fit the whole half dozen into a bin next to the one the chickens are in.

But sweet dancing monkeys on a stick do they yap and babble, all night long.  Do they even breathe?  They must have some kind of air-recycling mechanism that allows them to bring in air from somewhere else on their bodies (no, don't even think about it) and expel it through their mouths.  Does the military know about this?  Seriously - we could be eating our next superweapons.

Perhaps tonight they will calm down.  I hope so.  They're too small to make a decent meal, so we will have to deal with them for a while yet.

Happy Thanksgiving, everyone.
Posted by David at 2:11 PM