One of the things about scanning old family photos is that it makes you that much more aware of the lives your family members led before you came along.

This is a difficult thing for most people to grasp.  For most people the universe began sometime around the time they got to kindergarten, since that’s about as far back as they can remember.  But the world was here before then, and many of the people you know were too.

Ask them about it sometime.  You’d be amazed at the tales you might hear. 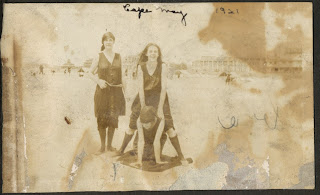 The girl standing on the right, without the bathing cap, was my grandmother.  She was sixteen years old in this photo, and messing around with her friends on the beach the way that people do at that age.  The way that I did at that age, not all that far from where this was taken.  We tended to go to Ocean City, just up the coast, rather than Cape May for our summer vacations when I was sixteen (and Sea Isle City when I was a kid), though for much of this century we returned to Cape May.  Cape May is what my daughters think of when they think of the ocean.  It’s a lovely place.

There are photos of her that are in better condition from that same trip, but this one I like for some reason.  Perhaps it is because she looks happy.

Today would have been her 108th birthday.

She came to live with us after her mother died, when I was eight, and she lived with us for almost twelve years after that.  She was a lot of fun, in a “don’t let the child-services people know” kind of way.  I learned how to swear from her, for example, and she had a vast supply of stories when she was in the mood to tell them.

These two things were not unrelated.

You had to catch her late at night for the best stories.  Fortunately this was not hard to do – she lived on a twelve-hour day for most of the last few years of her life, up from 12-6, asleep from 6-12, am or pm, more or less.  This coincided with my high school and early college years, so when I’d come rolling in around midnight the light would be on in her room and I sometimes found myself up there.

She was once dragged half a block by a trolley, and the worst part of it for her was that it ruined her new pantsuit.

She, like me, was somewhat resistant to anesthesia.  It took more than the usual dose and more than the usual time for it to work, and once she had to explain this at the top of her lungs to a doctor who started a bit of minor surgery on her without taking this into account.

I learned what “flitch” meant from her.