So yesterday we went back in time, sort of.

It’s always fun to go to the Renaissance Faire, not least because the sheer level of exuberant anachronism is enough to fry eggs.  I notice these things, as a historian.  A lot of people go to RenFaires dressed in things that would have gotten them burned at the stake during the actual Renaissance, for one thing (although the ladies wearing the chain mail shirts have started to wear bikini tops under them, which while mildly disappointing on my end is probably less chafing for them).  And for another, even those who are trying to maintain some kind of authenticity can’t agree on an era or region so you end up with medieval ladies-in-waiting flirting with Elizabethan lords while 17th-century samurai look on.

We’ll just skip lightly over the increasing number of folks from Westeros for now.

Personally, I love stuff like this, even if it does feel odd after having gone to actual medieval and Renaissance-era castles last summer.  It’s feeding time at the human zoo and the critters are on parade – what more could you ask of a day?

We got there a bit later than we had originally planned, since it was a weekend and there just isn’t that much reason to jack out of bed too early on a Saturday if you’re not getting paid to do so.  This ended up inconveniencing us not one bit, so let that be a lesson there.  We did have to park in the tall grass and ended up taking some of it home with us in the car door, but that counts as a souvenir.

If you’ve never been to one of these things, you really should go some day.  They are full of spectacle.  They are incredibly practiced at separating you from your cash.  And after a summer spent at the County Fair and the State Fair, they are blessedly quiet.  There is no piped in music.  There are hardly any microphones at all, in fact, even during performances where you might actually appreciate them (though in the way-over-the-top style that is the norm with performances at RenFaires, you really don’t need to catch the dialogue to get the jokes anyway).

We paid our admission and went inside.

One of the first things we did was find a show about mud.  There were three gentlemen who spent the about a half hour dividing the audience into two parts, convincing each side that they were on the superior part, and then doing joyously gross things in a mud pit to prove it.  Trust me, it made sense at the time.  It was fine lowbrow comedy, and we enjoyed it.

Lauren even got into one of the shows.  We had stopped to eat lunch – there is a long midway full of places selling things that nobody in the 16th century would have recognized as food but which were, nevertheless, tasty – and after she finished hers she wandered off and found a stage.  By the time we caught up with her she was starring in a play. 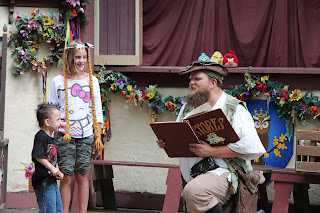 This tendency needs to be watched.  And applauded.

There were camels.  Did you know that there were camels all across Europe during the Renaissance?  I didn’t either.  But apparently there were, because otherwise you couldn’t ride them at these Fairs, now, could you?  And ride them we did. 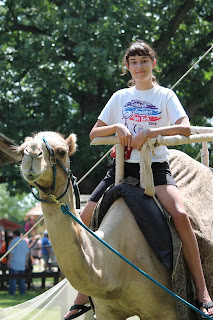 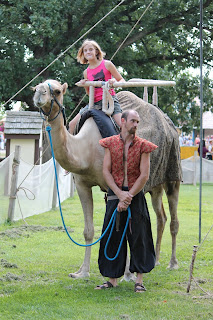 Lots of hats.  It was like Minnie Pearl had gone time traveling and died happy. 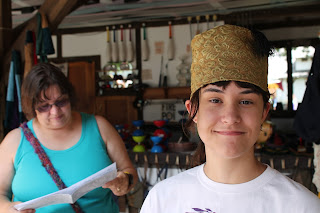 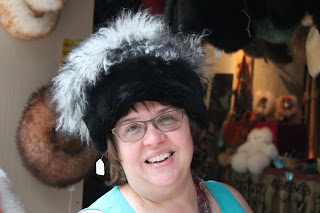 There were in fact a lot of places where you could spend your money, on everything from books to steampunk clothing to candles.  There was a place where they would make you a kilt.  There were several that would sell you swords of convincing heft and design, and a few that would sell you other swords made out of wood.  You could buy a didgeridoo, since those were also allegedly common in Renaissance Europe. 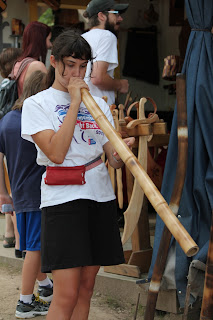 It took us a couple of tries but we did actually get to see the jousting, which was done with a mixture of acting and actual combat.  They really do charge at each other and hit each other with blunted lances, though the swordplay afterward was scripted and they all got up for a bow afterward.  Every quarter of the crowd was assigned a knight.  We got the Bad Guy, who spent his time mugging and snarking admirably.  He has a future in pro wrestling if this gig ever goes stale for him. 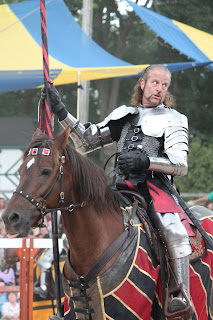 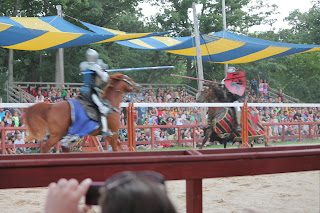 Tabitha even got a photograph with one of the knights – the second Heel, after our guy (the Faces were both down at the other end).  He was very nice about it. 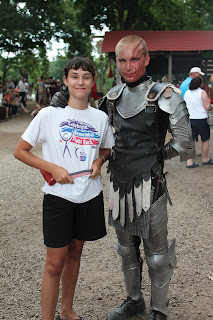 It was a long day, but a good one.