You Know You've Got to Curl

Today is the first day of a two-day bonspiel – a curling tournament – and Tabitha and Lauren are still probably out there on the ice even as I type, trying to put the rock in the house.


We left far too early this morning, picked up a couple of their friends over at the K-Mart parking lot where by common consent everyone meets to gather up fellow commuters in Our Little Town (who determines this sort of thing?) and headed off to the bonspiel.  It’s a junior event, where young curlers from all over southern Wisconsin are gathering to compete and have some fun together – one of the wonderful things about curling is that it is not really a sport that lends itself to cut-throat competition.  It’s a friendly game.

We got there in plenty of time, oohed and aahed over the facilities (which, compared to the more utilitarian set-up here in Our Little Town, were rather snazzy), and got their stuff stashed away in the locker area.  And then we waited while the early curlers finished their matches.

I took the time to walk through all of the meals with the volunteers in the kitchen, trying to determine what Tabitha could and could not eat.  They were quite accommodating that way – lunch was grilled cheese sandwiches, and when the bread turned out to be unsafe for her they found some safe bread and made Tabitha her own sandwiches in a fresh pan.  I am always grateful when people recognize the importance of treating food allergies seriously, and to the volunteers there I give hearty thanks.

Eventually all of our curlers arrived and divided themselves up into two teams. 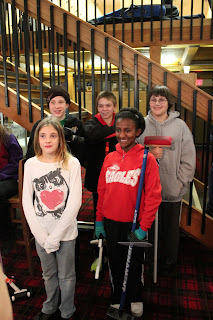 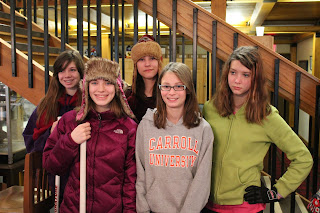 Once the early curlers finished and some explanatory remarks cleared some lingering questions for those of us who hadn’t arrived at 8am, they rang the bell and the matches began.

Tabitha’s team had Sheet 1, on the far left of the ice. 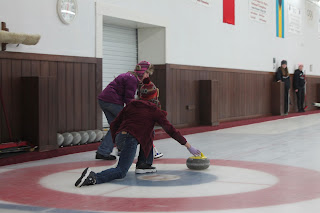 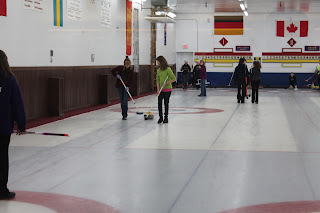 Lauren’s team had Sheet 5, on the far right. 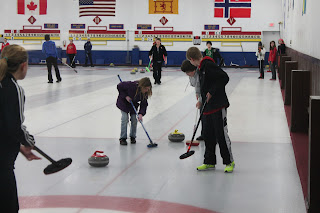 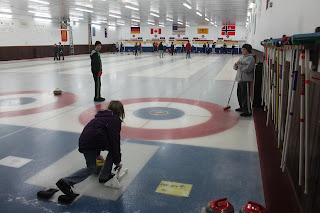 From a purely competitive standpoint the matches were somewhat lopsided, as both opposing teams turned out to be a bit more skilled than our teams.  But so it goes.  There was a lot of fun being had out there anyway – a few rocks thrown well, some nice ricochets and defensive moves, the occasional moment of low comedy – and that counts more, I think.

How can you not love a sport where you actually have to use brooms?

They’re still curling tonight, and after dinner they will push all of the tables in the warming room over to the corners, roll out the sleeping bags, and have the biggest slumber party in southern Wisconsin.

And tomorrow they will do it all again, at least until lunchtime.

I’m expecting to see some tired but happy girls when they return.
Posted by David at 5:13 PM

Curling is about the only sport I enjoy watching. The skill, strategy, and elegance is amazing. It is also fun to play even if you're not very skillful.

I missed the Queen of Hearts Bonspiel this year, but in years past I've seen a lot of amazing shots from the ladies. More so than the men's bonspiels where they seem to be more likely to get into heaving single rocks that clear the house and less elegant strategies.

Curling seems to be like soccer that way - I generally prefer watching the women's game, as they tend to be smaller and less powerful, and thus have to rely on things like skill, tactics and intelligence instead of brute force.

It was funny how they had two televisions in the warming area - one tuned to a Canadian curling match of some kind, and the other to EPL soccer. All they needed was hockey for the "unpopular sports that Dave enjoys" trifecta.