A Day at the Theater

Yesterday was the opening of Wishes Come True: Secrets of the Rainbow Planet down at Not Bad President Elementary.  It was also, given the rather limited runs that such productions have, the closing.  But I was there, and you should have been too. 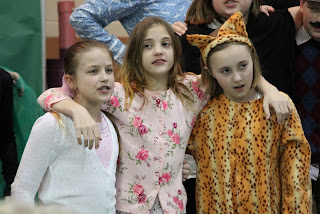 The play itself had all the hard-hitting social commentary that one would expect from a musical staged by fourth and fifth graders.  Its main message, delivered with the straightforward intensity of a letter to Santa, was that people should be nicer to one another, that you’re better off being who you are than who you’re not, and that if you believe in yourself you might surprise yourself and actually be good at things – and even if you’re not, you’ll have more fun trying than not trying.  And these are certainly worthwhile things to keep in mind, in this fallen world of ours.

There was drama.  There were gymnastics.  There was comedy.  And there were songs, my personal favorite being a country ballad entitled, “Penguins Are My Favorite Sort of Frogs,” which made sense in context. 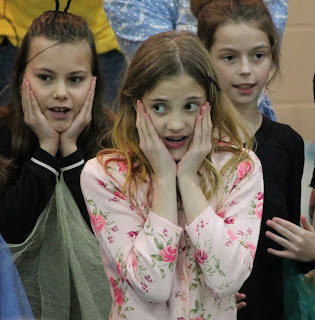 Lauren and her classmates down at NBPE have been practicing diligently for weeks now, staying late after school a couple of times a week and learning a vast repertoire of motions, lines and dance moves.  And as always with shows like this, the place was packed – I went to the afternoon show and it was standing room only, which worked for me since I was taking pictures from the back anyway.  It’s nice that the community supports these shows like that.  These kids put a lot of work into their play, and having a large and appreciative audience makes it all worthwhile.

First, she was a tree.  You didn’t think that trees had speaking roles outside of Fangorn Forest, but they do! 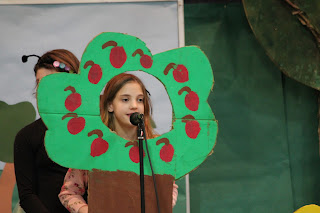 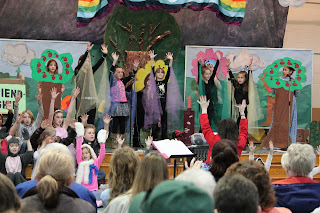 And then she was an old women – Mrs. Bones – who was part of a posse of old people sent to tell the hero that you’re never too old to have fun. 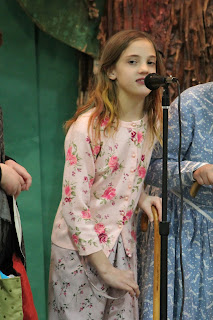 I spent many happy years in theater, almost all of them backstage, and it pleases me immensely that my children enjoy it as well.  You learn a lot in theater. 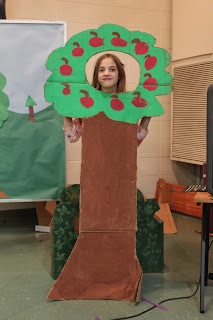 Awesome! I have three young relatives doing theater, one in a school one-act contest that took third and missed going to the next level by one point.

Congratulations to your relatives! Especially the one in the one-act contest - that's a nice achievement. :)

It's odd how often and in how many ways theatrical experience comes in handy in later life.