It was wall-to-wall birthday parties down at the bowling alley this afternoon.

I actually like that, even though it meant that we were a bit crowded.  Bowling is one of those grand old games that require people to move around a bit – but not too much that you can’t eat and drink at the same time – and get together in groups for social purposes.  There aren’t enough of those games anymore.  And besides I used to bowl a fair amount back in the day and it’s nice to see the family traditions continue.

Although I don’t remember quite so much of the blacklights or fog.  Perhaps I’m just blanking out on that.

Lauren loves her birthday - loves it with all her heart - so we try to make an occasion out of it.  And this year she decided that what she wanted was to go bowling with her friends.  How could we say no?

We spent most of the morning frantically getting ready for it – baking the cake (Kim made a zebra cake, which Lauren helped to frost), buying all of the little things that we had forgotten to buy during the week (such as ice cream and cards), cleaning the house so people could come over afterward, and so on.  You’d think that with a party not located at home this would be less of a task, but then you’d be wrong.

Eventually it was Time.

We hit the lanes shortly before 3pm, cake and goodies in hand. 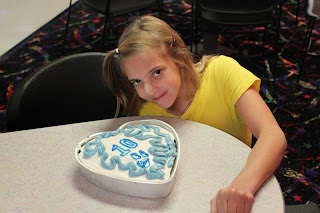 The place was packed.  There must have been a dozen birthday parties going on at once, all of them drenched in blacklight and fog, for this was no ordinary bowling.  This was Glow Bowling.  You can’t just go bowling anymore.  You have to go Glow Bowling.  Glow Bowling comes with italics and capital letters that you can hear.  It's just that cool.  The blacklighting was in fact pretty awesome, actually, but we were way down at one end of the lanes, right by the fog machine, so there were more than a few occasions where you just had to take it on faith that there was another end to the lane down there, deep within the fog bank, and that if the ball continued on the same path it was on when it entered the fog it would hit something.

And usually this was true.  At any rate, at least, there was often noise and commotion, and that's just as good really.

Not that anyone cared.  Hitting pins was sort of extra.  Mostly the point was to have fun. 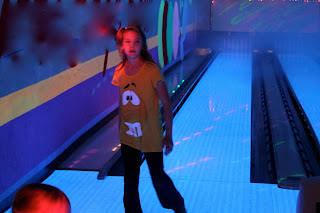 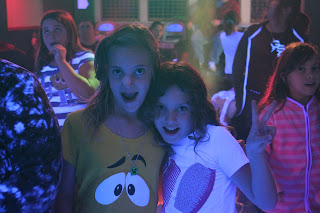 And when the bowling stopped, the eating began. 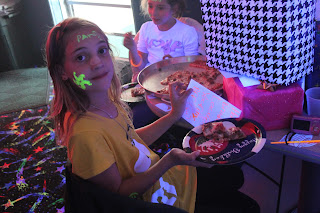 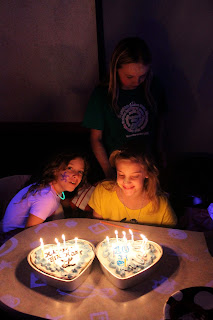 There was pizza.  There was cake.  There was ice cream.  There were French fries.  You had all your basic party food groups, all there at once.  We got them all good and sugared up, and then it was time to send them home to their parents.

Because that’s how we roll. 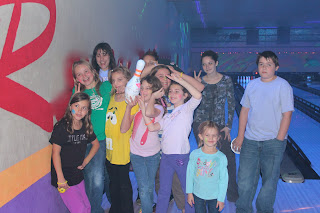 That last picture you all seem to be alive, so maybe not zombies...

Last time I went bowling, 3 lines was one too many, and my shoulder and knee made sure I would remember, come the next time.

Fun? You kids get off my lane!