Our Trip to Europe: Historical Sites in England (Part 2 - Not Really in England)

Our tour of English historical sites actually took us a bit outside of England itself.

We spent a lovely afternoon in Cornwall, for example.  Cornwall is the bit of the UK that sticks out on the bottom left of the island, and it is a place of incredible scenery, historic sites, and roads so narrow you feel like you’re Luke Skywalker zooming down some organic version of the Death Star.  “Sure, I can hit that roundabout up ahead!  I used to bullseye Wamp Rats back home and they’re not much bigger than that.”

Our target for this raid was Tintagel, the castle on the northern Cornish coast where legend has it that King Arthur was born.  There actually was some sort of stronghold there during the time period when Arthur was supposedly roaming about, between roughly 500 and 700 CE, but most of what is there now is significantly later.  It’s still about eight hundred years old, though.

And you can see why someone would want to build something here.  It’s essentially impregnable – high cliffs, steep access routes, and a coastline that redefines gorgeous – though whether a castle here served any strategic purpose, however impregnable, is apparently an open question.

Not being interested in conquest, we enjoyed ourselves without regard to such questions.

You approach Tintagel (which is pronounced “Tin-TAH-jul,” with the “a” in the middle syllable rhyming with “cat”) on foot from a carpark in the town of Tintagel, perhaps a mile up the hill from the castle.  It’s a long way down to the coast, but worth it. 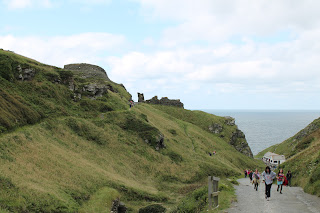 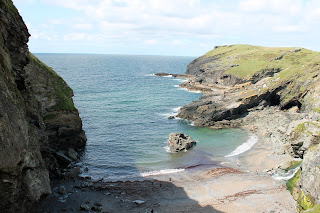 Just so you can get a sense of scale, there are actually people on that beach.  We’re looking down from the ticket selling area, which itself is only about a third of the way up to the top. 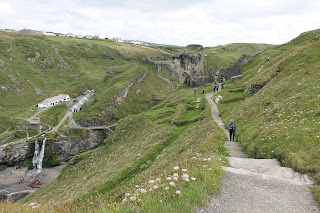 See that little bridge in the middle?  That’s where the last photo was taken from.  This photo is also a great example of the general British casualness regarding safety rails.  Tintagel is quite a climb – you walk steeply downhill from the town to get to the ruins, but once you’re there you have to climb steeply uphill. 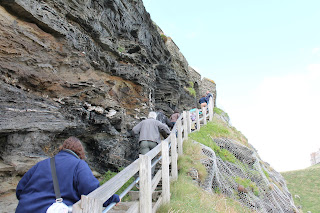 You can choose to go left or right at one point – if you go left, you get to the section with the rounded wall that you see at the back of the previous photo.  If you go right, you end up on a much larger promontory that juts out into the sea and has more but smaller ruins.  I have to say I regretted not going to see the other side as well, but unless you’re a mountain goat with the endurance of a Tour de France cyclist, you really need to pick one side or the other.

And you’ll notice that path is only about a meter wide, with no safety rails of any kind until you hit the next path, about fifty feet down.  This was typical.  There’s nothing on the other side of these ruins but air. 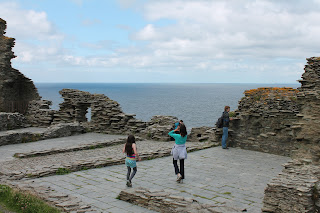 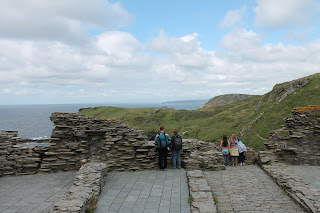 But we made it up to the top and managed to avoid plummeting to our doom, which is one hallmark of a successful vacation, I say.  There’s a lot to see up there – ruins of many things, paths, even meadows.  One of the more interesting bits was a tunnel that you could walk through, as most of us did. 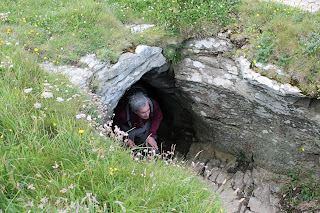 It may have been used as a cold storage facility in what passed for summer in Britain, which was in fact warmer in the medieval period than it is today.

Eventually we found our way back down to the beach, which was as staggeringly beautiful at ground level as it was from above. 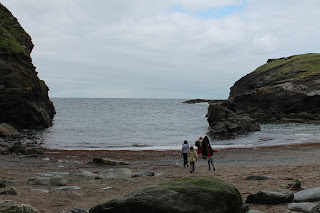 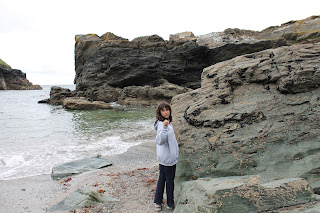 Off to one side is what is known as Merlin’s Cave, which you can walk through. 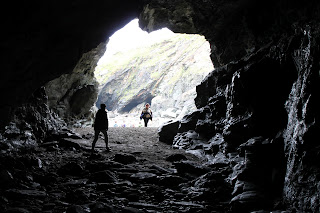 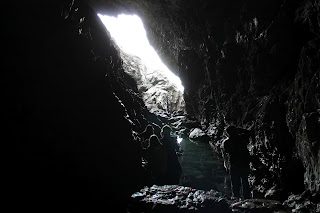 It is a lovely spot, full of echoes and water.  On the day we were there we shared it with a small group of morons who felt that what an echoing cave really needed was a parade of shamanist-wannabe drummers pounding and chanting to whatever spirits or harmonies they felt resided there.  So eventually we left and explored the beach, which was much more harmonious.

I took this photo in Tintagel, because I thought the vertical stone arrangement in the walls – typical for the walls in that town, from what I could tell – was interesting.  I’m sure there’s a reason for it, though whether it’s any better than the reason the drummers had for doing what they did is probably an open question. 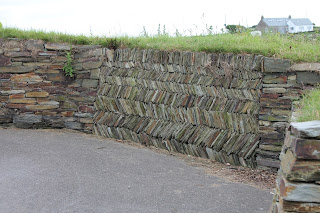 We also spent some time in Wales, which is an easy day trip from Julie and Richard’s house.

If you’ve never been to the Wye River Valley, you’re missing out on what is clearly one of the most beautiful places on earth.  The Wye is a small river – though it was nearly at flood stage when we visited – and it meanders through a lush green hillside country that could easily be some culture’s afterlife paradise.

Except that the signs have no vowels.

Actually, I grew up in an area settled by Welsh immigrants in the 1600s, so I am used to the language even if I can’t speak it.  It was sort of nice to see. 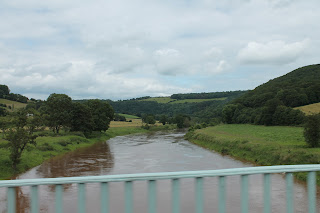 Our trip to Wales was to see Tintern Abbey. 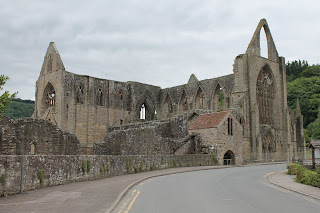 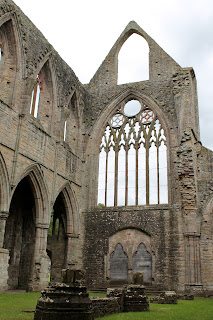 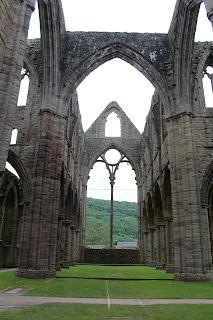 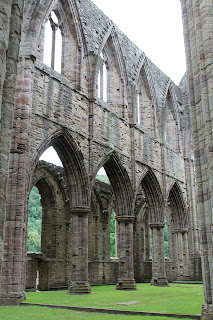 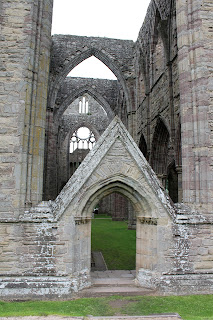 Like almost all of these sites, you can walk around pretty much anywhere and climb onto the walls, and we spent a happy afternoon doing just that.  Beyond the church walls are the outlines of the walls of the rest of the abbey, with suitable signs letting you know what they were. 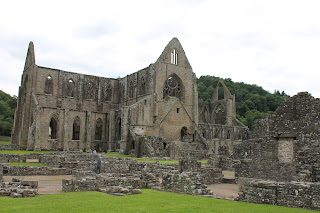 It is an amazing place.  Really, I can't say anything else that would do it justice.
Posted by David at 1:39 PM

On the lack of safety rails - well, it's worse in Iceland. But having said that, every time someone puts up a safety feature where no one saw the need before, there are cries of "it's another case of health and safety gone mad!". Which discourages the do-gooders. Go ahead, google "health and safety gone mad" - it's all British. Reading your blog I was tensing up involuntarily, remembering our girls dancing along a wall-top, as we watched from below on the "land" side, not realising the other side didn't involve similar quantities of land.

As regards the herringbone stone pattern - I think it's just to look nice.

Those ruins are quite impressive. The French don't like the safety stuff either.
I figure we get so much in the States because somebody will sue you if you have an accident where there wasn't a railing.

Reading your blog is like reading a wonderful history book with the added value of National Geo quality photography. The added humor reminds me of dry Brit wit.
I could actually smell the water. Can't wait to read more.