Our Trip to Europe: "English, Mother-[Fornicator], Do You Speak It?"

I think I will take a break from the historical stuff for a while and move on to other things.  Notably language.

Swedish and English are close enough to be really funny sometimes.

I knew I was in a different country on the first day, when we were driving west from Stockholm and stopped at a highway convenience store for some snacks.  Please understand, at this point I had been awake for 22 of the previous 24 hours, and I was seriously jet-lagged – the clocks all said noon but my body still said 5am.  So when I got to the counter and saw a little box full of fresh pastries for sale, I was pleased – a sugar rush might do me good.  But right there front and center of the pastry box was a long chocolate-covered cylinder of a cake, neatly labeled “Skumracket.”

This did not make me want to buy it.

It was only later that I learned that “skum” is Swedish for “foam,” so that must have been one of those crunchy meringue things or something similar. 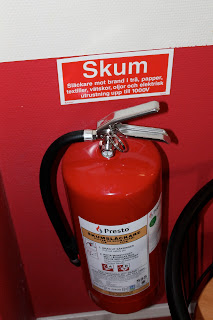 We saw this at the Hotel Linne in Goteborg (pronounced “YOU-te-BOR-yeh,” with the “ou” in the first syllable rhyming with the “ou” in “should” – in English it’s usually spelled Gothenburg for some reason), a youth hostel where we stayed overnight.  This would be called a dry chemical fire extinguisher in the US, but I rather liked the idea of a big red Skum sprayer.

Back at the convenience store on that first day in Sweden I skipped the Skumracket and instead bought a roll of butter cookies.  They were excellent butter cookies, it must be said – I ended up buying several rolls of them while we were there, and even brought one home on the plane – but their motto left me a bit puzzled. 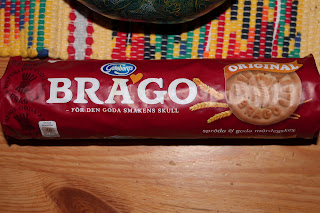 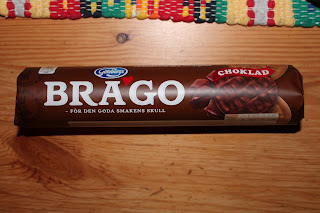 I had a lot of time to look at the butter cookie wrapper on that drive, and eventually I noticed the other motto, underneath the picture of the butter cookie.  One may not simply walk to Mordor, but apparently one can have butter cookies there.  Just because the place is evil doesn’t mean it can’t have amenities.

Food items were constantly amusing while we were in Sweden.  These candies were actually quite tasty, though I’m not convinced they will sell in an English-speaking market. 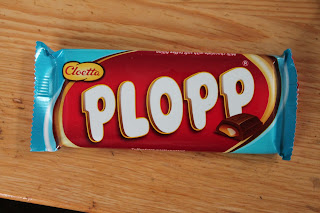 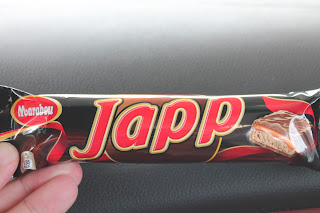 And I’d be surprised to find this brand on shelves in Wisconsin any time soon. 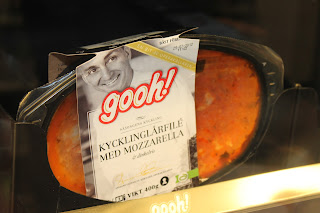 Further, I’ve hung around enough people who are really into leather to know that this store would appeal to them even in English, but I still found it amusing. 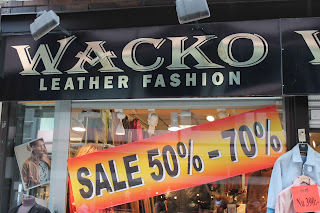 But really, for prime entertainment when it comes to linguistic confusion, you just couldn’t beat the road signs.

For example, these are the Swedish signs for “Entrance” and “Exit.” 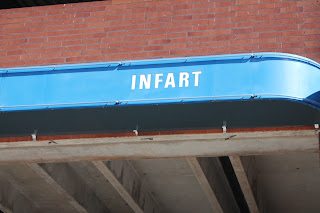 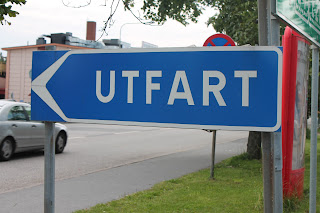 “Fart” is the Swedish word for “speed,” so what those signs actually translate to, more or less, is “go in” and “go out” (in-speed and out-speed).  But that’s clearly not what they say in English.  Apparently it is considered traditional for American tourists to take photos of these signs to show their friends back home, and who was I to fail in my duties?

This was especially true when I saw a sign for an exit that led to the elevator. 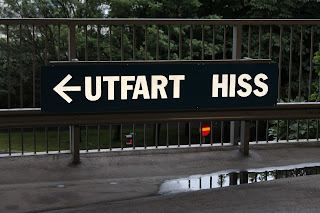 The mental images were compelling, shall we say, and I giggled all the way home.  Because I’m just juvenile that way, that’s why.

Based on the actual meaning of the word, the next sign means “speed hindrance” – a narrowing of the road designed to slow people down.  We don’t have such narrowings in the US, but we do have “speed bumps,” which are designed for the same purpose.  Nevertheless, the sign did conjure up all sorts of odd mental images, both with the graphic and the label. 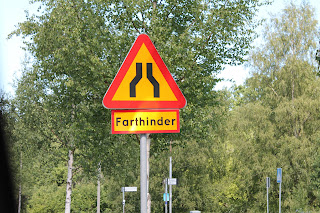 As did this one, which we passed on the highway. 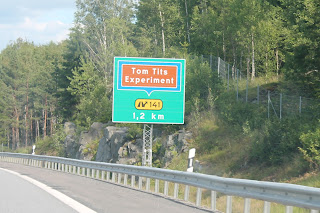 I’m not sure what sorts of experiments are being run here, but I’d sure like to find out.

This one I liked mostly because of the graphic.  If you’re a Swede, this collection of signs means “No parking on the shoulder, and expect hilly roads for the next kilometer.”  To me, it just says, “No boobs for a while,” which I found sort of disheartening but I suppose one does not wish to distract people unduly while they are driving. 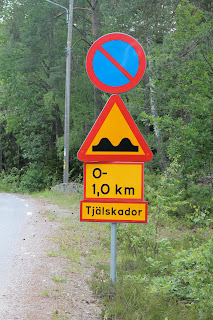 Now, you’d think that once I’d gotten to England, this sort of thing would stop.  They speak English there, don’t they?  England, English, isn’t that how it works? 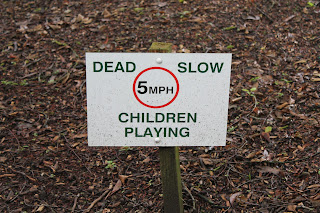 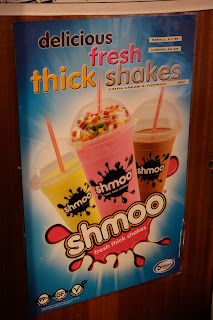 Maybe not.  I’d be very reluctant to eat anything labeled “Shmoo,” myself, since in our household that word is almost invariably preceded by the phrase “kitty butt” and followed by things being tossed in the laundry or scrubbed with a wet paper towel and soap.  We can’t be alone in this.  How this one got past marketing I will never know.

Of course, sometimes it must be said that the English know how to use their language very, very effectively. 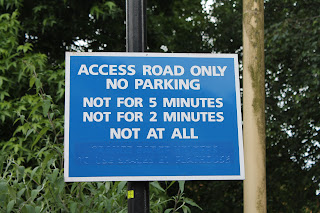 Those signs also make ME happy!

On my vacation I just came across horrible misuse of apostrophes on signs. You definitely win!

Glad I could make you smile, Michelle. :)

I still remember your shock at the sign by the side of the road outside our house on your last visit: "Danger cats eyes removed". http://letstourengland.com/blog/wp-content/uploads/2012/02/Road-Sign-in-England-.jpg

Of course they were resurfacing the road, and had taken out the cats eyes (reflectors), to be replaced on the new surface. And when you've been here a while, you stop noticing things like this. It's good that you remind us of these things!

Incidentally, for a good laugh to the point where you're crying, I recommend googling "funny road signs England" and then clicking on Images.

I like the idea of a "zebra crossing" for "crosswalk." Have yet to see a zebra cross.