Scenes From Our Trip Out East - Part 2: Visitations

The last time we had an East Coast Christmas we went to my aunt and uncle’s house in Chattanooga. We had a grand time, it must be said, but the problem with going to new places for the holidays is that you didn’t grow up there and thus don’t get to catch up to any non-family friends. This time we were back in my old neighborhood and still didn’t manage to see all or even most of the people we would have like to have seen, but at least we made a start at it.

But first, there was: The Hotel Pool.

If you’ve never traveled with children, you really don’t understand the allure of The Hotel Pool. At least you don’t if you’ve never traveled with my children. Tabitha and Lauren have been on the road since they were babies, and as far as they are concerned hotels are just pools with attached bedrooms. The idea of a hotel without a pool strikes them as an absurd waste of space and building materials.

So when the housing worked out this year that their cousins would be staying at a nearby hotel rather than trying to squeeze in with Grammy and Grandpop (and their cats) or bunking in with Aunt Lori’s parents, well. It was like Christmas in December. Right after Christmas. In December. Odd how that worked out.

It would have been perfect except for one thing: the pool is apparently only heated at night.

When Keith and Lori checked it out the night before, it seemed happily bathlike. But when we showed up the morning after Christmas, it was essentially an outdoor pool that had mysteriously been moved indoors. Not that this prevented the cousins from swimming, really. It just kept the timing a bit shorter than it might otherwise have been. 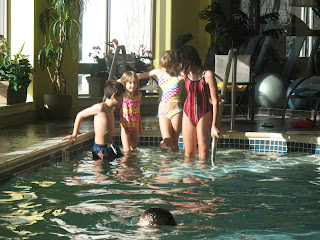 We returned to my parents’ house, and after a lunch of cheesesteaks Jenny and her boys – Koji and Kei – came over and we all went over to our local lanes for an afternoon of bowling. 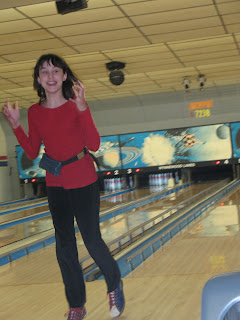 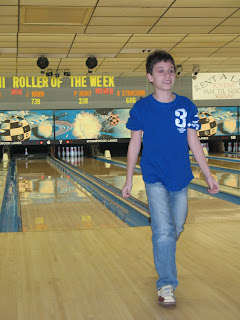 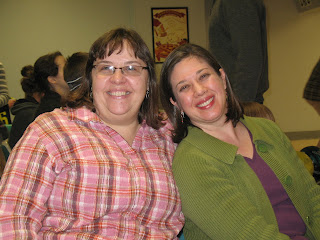 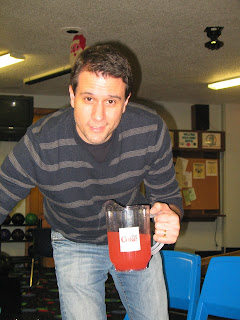 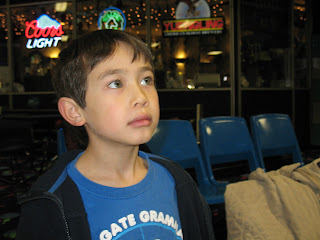 Bowling is an underrated activity, I think. First of all, it is an activity rather than a sport, which means you can perform it perfectly well while consuming beverages and snacks and socializing with the people around you. Second, and more importantly, you get to throw heavy objects at things to try to knock them down, and not only does nobody yell at you for doing so, they actually reward you for it. And then they set them back up and give you back the ball so you can do it again. Seriously – why doesn’t everyone do this all the time? It’s amazingly therapeutic, depending on who you imagine the pins to be.

Actually, I know why people don’t do it all the time. It’s because we’re old and not used to torquing our bodies that way anymore and we wake up the next day with a whole new assortment of aches and pains that point out entirely novel areas of our bodies whose purpose seems undefined except to hurt after going bowling. But if we went bowling more often, then we would be used to it and wouldn’t have those aches and pains, which brings me back to my original point.

Bowling. It does a body good. At least if you don’t think too hard about the specific snacks you’ve consumed.

That night we had a concentration of birthday celebrations and the traditional ravioli that goes along with such things. It was a fine evening.

Of course, the kids get easily bored with the adults’ insistence on sitting around the table and talking, so they crept off into the living room shortly after dinner. And what did they do? With an entire house to run around in and a set of cousins who hadn’t seen each other since August, what did they do? They set themselves up on their various electronic gizmos and gadgets and sat there, nearly touching, texting each other. Welcome to the 21st century, folks! Batteries not included. 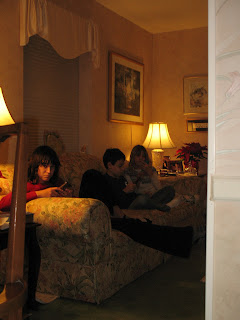 The next day Matt and Nell came over, which meant that we got to meet their two girls – Molly and Nora – for the first time.

It’s amazing how quickly you forget the energy levels of small children. Molly and Nora are good kids – fun to hang around with, well behaved, and cute as all get out – but watching them move about was just exhausting. I can’t believe that Tabitha and Lauren were ever that active, and yet they were. Don’t even get me started on me. I could not possibly have ever been that active. Not even in my dreams. 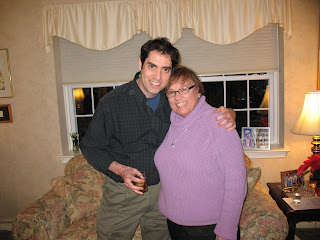 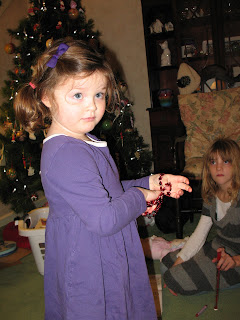 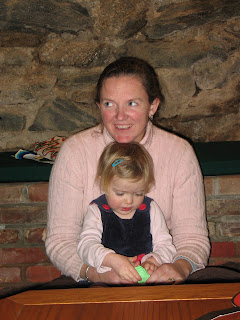 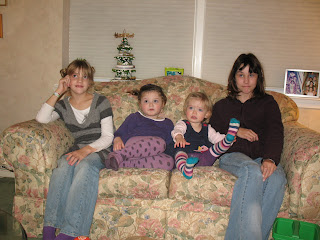 A day later we decided to take the girls to the Franklin Institute. 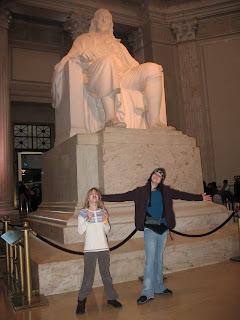 If you’ve never been to the Franklin Institute, you should go. It’s four floors of sciency goodness, much of which is hands-on. When I was a kid my dad’s company would give him passes for the week after Christmas so we’d always go down to see the place, along with every other school-aged child and their parents in the greater Philadelphia area. So the crowds that we encountered on this trip – there had to be four bezillion people in that museum – felt like old times. I’m not sure I’d know what to do in the Franklin Institute if it weren’t packed to the gills with people.

The highlight for me was the giant walk-through heart. It’s not a trip to the Franklin Institute unless you go through the heart, which has been there since I was a kid. It’s about 15 feet high and you follow this narrow, winding path through it as if you were a blood cell, and all the while it thump-thumps at you like an Edgar Allen Poe story. It’s a classic. 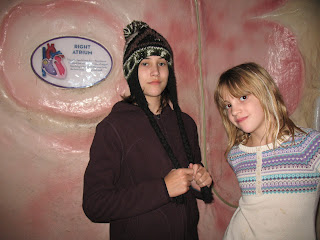 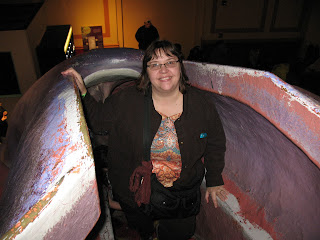 But there were other things as well. We spent some time at the dinosaur exhibit that is up there now, and there was a CSI exhibit that might have been fun at half the crowd level. We hit the planetarium, the new and improved cafeteria, and a raft of exhibits that we could play on, jump around, or otherwise bounce off of. One room had a floor that was set on springs, and if people would jump on it enough the bouncing would charge a giant capacitor overhead until it finally released all its energy in one prolonged and noisy ZAP (and wasn’t that a surprise the first time that thing went off, yes it was).

There was also a wall of red lights with antennae that could pick up cell phone signals, so if you took your phone over to it and made a call or logged into a website it would make the lights flash brightly in patterns. That was cool. 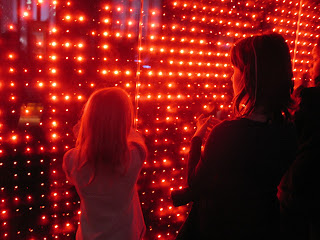 But eventually all things must come to an end, and so we packed up our stuff into the car, bid Grammy and Grandpop adieu, and headed off into the wilds of New Jersey to visit a couple more friends.

First we stopped in to see Jack and Laura. 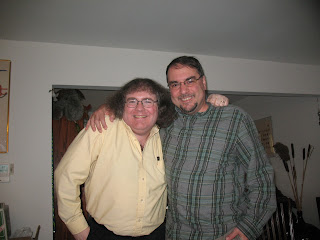 Jack was my roommate through most of college. He has recently accepted a temporary deanship at the university where he teaches, a lesson in the dangers of asking if there is anything one can do to help out in a crisis, so he and Kim actually had a lot to commiserate about. We had a very nice lunch and caught up a bit, and then it was back on the road to visit Trish and her family. 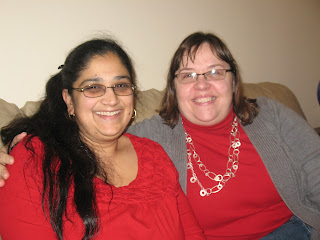 When we got there we found not only Trish, Joel and their three kids, but Trish’s nephew and niece as well. Add in our kids and you’ve got a party! A loud party, with an astonishing amount of motion and energy. How did we ever get this old?

The next morning we headed off into New York City, there to have Adventures.
Posted by David at 1:43 PM