Who Needs Dignity When You Have a Good Cause?

Why is it that so many charity events require me to dress up in drag?

Last night was the American Cancer Society’s “Relay for Life” event, out at the county fairgrounds. Home Campus was there with a nice little booth nestled in among the others, and as the husband of the Interim Dean (the “First Mate,” as one of my friends refers to me now) it somehow fell to me to join the “Mr. Relay” team.

The Mr. Relay event is simple. A number of guys get dressed up in drag and walk around the event for half an hour soliciting donations from the assembled multitudes. The winner gets a prize and the money goes to a good cause. It’s a win/win situation, depending on your views on guys in drag.

Not having an appropriate wardrobe for such an event, I relied on a friend in the Business Office to supply me with a turquoise polyester frock that belonged to her mother and would have been quite at home at a “Ladies For Eisenhower” event. I skipped the high heels that I usually wear for the YWCA’s “Walk a Mile in Her Shoes” event on the grounds that walking laps in such things was not something I was willing to do. That and I couldn’t find them anyway. So I went with sandals.

The girls and I showed up around dinner time and reported to the Home Campus booth before running off to scavenge up some food. Tabitha and I went with normal boring fair food, but Lauren indulged her adventurous streak and went for some buffalo wings – the “mild” variety, granted, but they were spicy enough for her and I was impressed she tried them at all. She was a happy mess when she was done. I’d have joined her if I didn’t have to look good for the crowds later.

All night long I had an old Miller Lite commercial from the 80s running through my mind – you know the one, if you’re old enough to remember the Cold War. It starred Joe Piscopo and a number of other squarish, hairy guys as the East German Women’s Swimming Team. They were sitting around a table, in drag, smoking cigars and drinking Miller Lite. “Got to maintain the girlish figure!” Piscopo said at the end. Odd how things like that take up valuable real estate in your mind and other things, such as why you’re standing in the grocery store with $20 in one hand and no list in the other, find no room at the inn.

Eventually it was time to become enfrocked. 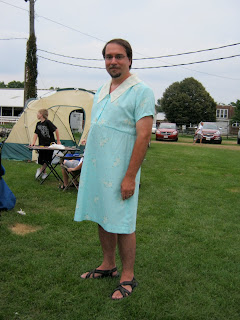 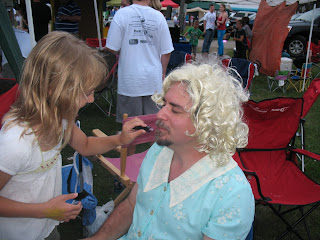 I was gorgeous, for certain values of gorgeous. 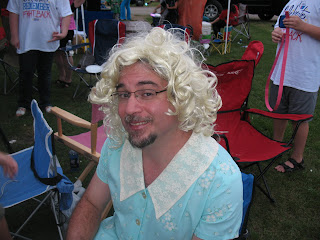 The announcer then made a call for all Mr. Relay contestants to report to the main tent, where we had to register officially – which essentially boiled down to taking a large flat envelope and writing our actual names, the group we were representing, and our Mr. Relay names on it. Nobody told me I would need a stage name, so I had to come up with one on the spot. I went with Lola Vavoom, on the theory that there is never a bad time for an obscure literary reference and if there were any Jasper Fforde fans in the crowd they might get a kick out of it. 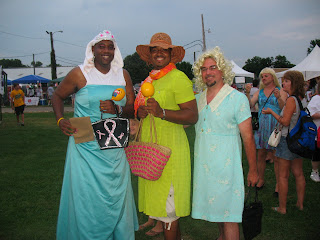 For some reason we were then forced to do Zoomba dancing. Fourteen guys in drag up on a stage maybe twenty feet square trying to keep up with a manic exercise instructor while dozens of sweaty women in spandex cheered us on – it was an appropriately surreal start to the event.

They then introduced us all, using our stage names, and we were off to walk around the grounds. Most people were pretty good about throwing a buck into our purses – it was a sympathetic audience, after all – and despite a few raindrops it went pretty well. I ended up in 10th place, having collected $40 in $1 increments. This made me laugh inordinately because it reminded me of an old joke that I’m not about to repeat here. For those of you wondering if it’s the same joke, the punchline is, “Everybody.”

The winner – who had arranged things ahead of time with his supporting group – came in just a shade over $600. He won a purple boa that he had to wear for the rest of the evening. My prize came a few minutes earlier, when a sympathetic person saw me in my polyester dress and blonde wig and said, “Do you want an ice cream bar?” And I did. 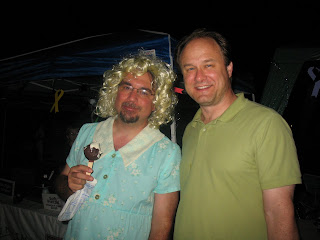 OK, dude with a tiara is awesome, but the guy between you two? I love his hate!

Also? I love the sneaky kid that photobombed that picture.

Oh sweet dancing monkeys on a stick - I didn't even see the photobomb when I posted that! That's my daughter Lauren, doing what she does best. :)

That hat is awesome. I have to say the guy on the far left (representing the PTA of one of the local elementary schools) was my favorite. For reference sake, I stand about 5'10" - he was immense. And he had a voice like Barry White.

Sure, you can pretend this was something out of the ordinary. But I saw your closets when we were housemates, and want the record to show that they were filled with turquoise polyester frocks back then.

Well it wasn't like I was going to borrow any of those trashy miniskirts you used to wear.

My niece and nephews say, "Oh my God" with a little French accent.

Bea, is that "Oh my God" a pitying sort of thing or do you mean I have somehow managed to shock the French? ;)

Who is the handsome guy in the green shirt?

Your legs remind me of some Bryn Mawr women I used to know.

The "omigod" was a confused one. They weren't sure how to react!