On Camping and Norman Rockwell

Well, the girls are back.

We shipped them off to 4H camp on Saturday, the first time they’ve ever been away from home for this long without being in the custody of a blood relative. As a dry run for high school (when the only signs that they will still be living here will be a rising pile of laundry and a shrinking pile of food) and college (which I choose not to think about in any detail) it wasn’t bad. Kim and I got a fair amount of work done without feeling guilty about ignoring them, and we managed to try out the new Indian restaurant in town that we can’t bring Tabitha to because it’s full of tree nuts. So there were pluses.

But it’s good to have them home.

They had a grand time, schlumpfing around the woods of central Wisconsin with a marauding horde of their peers. They went canoeing and swimming, they did all sorts of arts and crafts, and they got to experience the joys of living in a cabin with a bunch of people they’d never met before.

Tabitha even had a Counselor-In-Training in her cabin, which makes me start humming the song from Meatballs every time I think about it.

They got back into town around 1pm, having not had lunch, and since I knew that this would be the case I had already made plans to take them to the Buffet Place not too far away from where the buses pulled up.

It used to be a fairly utilitarian place, with a wide variety of decent if not spectacular food and a decor that could best be described as “inoffensive.” The only real nod it made toward any sort of atmosphere was a vast collection of framed Norman Rockwell prints stationed roughly every eighteen inches across the walls (windows excluded).

And now it’s all different.

The food – still the same decent if not spectacular stuff, though fewer varieties of it – is now attractively displayed in ethnic ghettos, each with its own neon label. The carpet is new. And on the walls there is bright vibrant art featuring overhead views of quaint European towns and colorful still-lifes (lives?) of rainbow-hued vegetables.

I miss the Norman Rockwell prints.

Rockwell was an under-rated artist, I think. Most people see the glorification of mid-20th-century American small town life that was the surface of his work and look no further, dismissing him as a sentimentalist hack, little better than a greeting card illustrator. But he always seemed to be saying something a bit darker underneath that when I looked.

My favorite of his was a Saturday Evening Post cover illustration from February 11, 1939, a week before my grandparents were married. The colors in the print at the Buffet Place were blues and browns rather than greens and ochres, but the image is the same – a man in a jester suit staring at an image of his face on a stick. The image has the happy smile that a jester is supposed to have. The man staring at it does not. 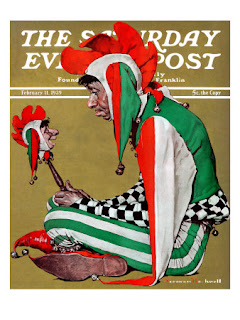 And I always tried to sit in the booth underneath it.  The manager said that rather than throw all the old prints in the dumpster, the way the new corporate folks said to do, they just let the old staff take whatever they wanted.  It's nice that it found a new home, though I wish I had known - I'd have put in my request for it.

I’m glad the girls had a good time at their camp, on their own. It’s a good thing to see them gaining independence and confidence that way.

But I can still feel a little melancholy that they’re growing up so quickly.
Posted by David at 9:00 PM

I was allowed custody of my niece and nehpew at the pool on Monday for the first time for a few hours. A milestone.

Sorry about the change in deocration at the resto. I'd rather see a genuine Rockwell print than a wanabee European one.

The joy of the pool is that you can park yourself in a chair with a good book while they splash around under the watchful supervision of the lifeguard.

Although I imagine you were in the water along with them, you swimmer you. ;)

From the Norman Rockwell Museum store. Maybe you just would want the print if it fell into your hands, or maybe you would be willing to invest $20 or so, I don't know.

Or I may just leave strong hints for with my family regarding my upcoming birthday and Christmas...