Almost every weekday for the last six school years, I have gone down to Not Bad President Elementary to pick up one or more of my children. And every time I have done so, I have found myself confronted with this: 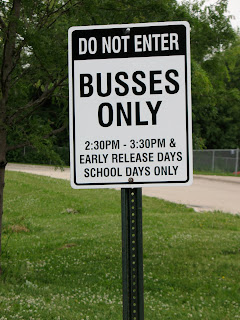 And invariably I ask myself, “Why would an elementary school reserve an entire driveway just for kissing?”

After all, this seems like something more appropriate for a high school or a college campus – an effort to confine all of the public displays of affection into one central location where those who favor such things could freely indulge and those who find such things aggravating or too much of a reminder of being recently in the former group could just avoid them.

Of course if I were in charge of such a place, I think I’d want to have an area set aside that wasn’t mostly asphalt. Also, I’d move it to the back of the building, in case activities progressed in their natural order to other things. Mustn’t scare the horses, and all that.

This is why I will probably never be in such a position, now that I think about it. That and my utter lack of qualifications for such jobs.

Although that never stopped anyone before, so I suppose the option is still there.

There is also the possibility that the sign is referring to a specific form of transportation, usually yellow, often found near schools, although I would prefer not to believe that as it would imply that the organization responsible for educating my children has not only made a simple spelling error but also – and more importantly – has not bothered to correct this error for the better part of a decade.

Perhaps if I can convince Kim to come down there with me sometime, we can test out my first theory.

If you don’t hear back, though, you can assume we were hit by a bus.
Posted by David at 3:22 PM

So it's a kissing locale for people with an "early release" issue? Seems a little embarrassing, but okay....

I'd much rather be hit by a buss there than a bus anyday. !!

@Eric - maybe *that's* why we don't see the kissers there!

@Eric - You know, in all this time that had never occurred to me. I will never look at that sign in quite the same way again... :)

@Kim - That can be arranged.