Wisconsin: A Report From The Front Lines of the Teabagger War On America

The girls and I spent this afternoon engaged in participatory democracy. You should have been there.

It is now a week since Governor Teabagger introduced his plan to gut collective bargaining rights for public workers in the name of a fiscal crisis that he managed to create all by his little old self. It has not gone quite as he suspected it would, I’m guessing.

Rather than standing idly by while this bitter assault on an already diminishing American middle class was ramrodded through the legislature, Wisconsinites have gotten organized, vocal and demonstrative.

After the Republican majority in the Senate refused to make anything but minor cosmetic changes to the bill, all fourteen Democratic State Senators left the Capitol and went out of state, denying the radicals the quorum they needed to shove this down our throats. Of course Governor Teabagger has complained about this in much the way that a spoiled child does when the kitten he was about to stomp is pulled away by a nearby grown-up. He has called for these legislators to return to Madison and “do their jobs.”

Uh, Mr. Walker? They are doing their jobs. They are preventing your radical right-wing assault on American values from being enacted and thus are representing their constituencies in the only way they have left to them. As a member of one of those constituencies, I applaud them.  They represent me just fine.

In the meantime, demonstrations continue in Madison.

And we were part of it.

The schools closed here in Our Little Town today, as most of the employees took the day off to protest. And good for them. A true education does not stop at the schoolhouse doors. Sometimes you have to go out and do for yourself.

So the girls and I made signs expressing our views of the current situation and headed on up.

When we got there, we joined a slow-moving parade of citizens around their Capitol building, each there to support the other and most with signs of their own. There was some chanting, the most commonly repeated one being something along the lines of “Tell me what democracy looks like! THIS is what democracy looks like!”  Mostly the folks were just talking and walking. 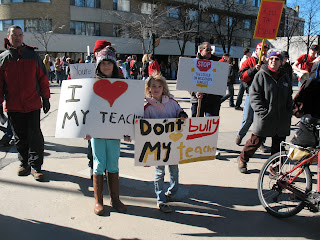 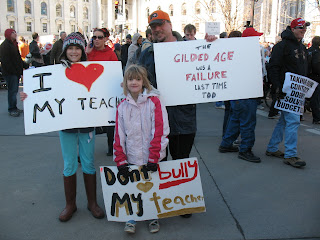 The mood was cheerfully defiant and quite friendly. There was no hatred, though there was anger at injustice. There was no sense of danger, nothing to suggest that any of the hundreds of children there were out of place. It was more orderly than most sporting event crowds I’ve been in. There were even people walking up and down with trash bags to keep the place clean. 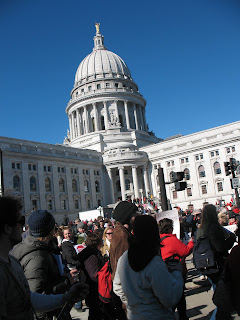 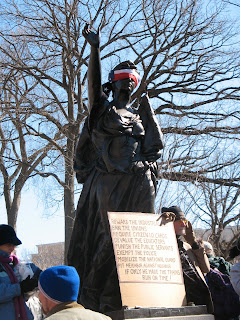 Honestly, the most hostile looking people I saw were the journalists, who had the look of people annoyed at not having much drama to report.

At one point the crowd knotted up in front of a small stage where several men were slowly climbing up and toward the lip. One of them turned out to be Jesse Jackson, who waved and said a few inaudible things before climbing down again. I’m not sure how to take that. On the one hand it’s nice to have a high-powered guy like that on your side. On the other, well, his success rate at backing causes has not been all that great of late. But he is out there trying, and it was good to see him. I wonder what he said.

At one point we passed a small counter-demonstration of five lonely-looking people holding signs in support of Governor Teabagger. They were up on a staircase leading to one of the side entrances of the Capitol, and were humorless enough to be dressed in dark business suits. The larger crowd was carefully ignoring them, and several people had posted themselves nearby to let people know that giving such folks attention would only encourage them. So the crowd flowed by them, and they looked sort of disappointed at not getting much reaction.

Eventually we went into the Capitol itself, which was packed with people.

We made it into the Rotunda just as a rousing rendition of the Star Spangled Banner broke out, a reminder that it is the protesters, not the Teabaggers, who are standing up for Americans here. 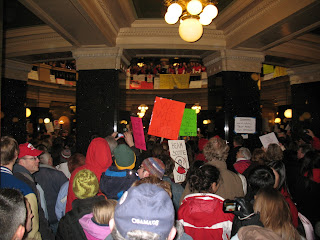 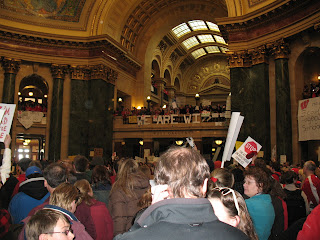 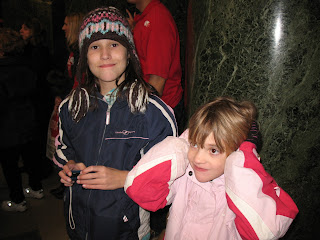 It took some time to navigate through the crowds in the Rotunda – a lovely space, really, and worth a visit in calmer times just for that alone – and finally we were outside. A band followed us out the door and last I saw they were dancing in the street, demanding to be told what democracy looked like. 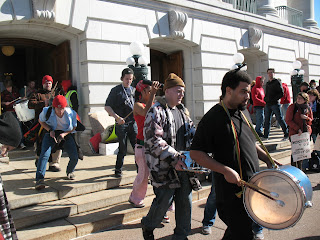 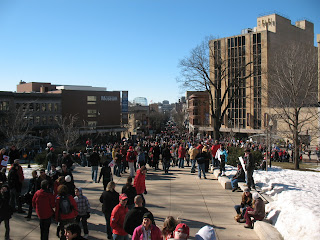 We didn’t stay too long. After leaving the building we marched our way back to the side street up which we had come and made the long walk back to our car (parking in Madison is never easy, even on normal days).

Kim is up there now.

So far, the people of Wisconsin have successfully made their voices heard and blocked the implementation of Governor Teabagger’s lunatic fringe extremist agenda.

David, your Governor is a tool.

And congrats on exposing your fine girls to the wonders of democracy and activism.

What Janeice said! And so glad you could be there. We former WI people are with you in spirit!

Speaking as a public employee in another state: Solidarity, my friend, and good luck!

Good for you! We've been up there everyday since Wednesday, and we will continue to be there everyday until it's no longer necessary. Great pictures by the way, you're a much better photographer than myself. I have a bunch of pictures posted on my facebook from Wednesday and Thursday, and will continue to update the album. I knew I liked you as a professor for a reason ;p