Lauren may have a career in theater ahead of her. As someone who has spent much of the last three decades backstage, I’m not sure whether to congratulate her on that or console her.

This weekend we had a show down at Home Campus. It was a science education and comedy show, one that I had been looking forward to for a while. I saw the guy in a showcase setting when I was at a conference in 2009, and he was really funny. Plus, if you’re not careful, you might end up learning something from his shows. Can’t beat that combination, now, can you?

As the guy in charge of these things on a day-to-day basis down at Home Campus, it is my job to make sure that everything is ready for them. This is not as glamorous as you might think. It involves such things as buying sandwiches and bottled water for the performers, picking them up from the airport if necessary, ferrying them about town, opening the theater on show days, locking it back up again afterward, and so on.

It’s actually a lot of fun when the shows roll around – we’ve had some great acts come in, and they’ve been uniformly wonderful people to hang around with. I’ve even managed to stay in touch with some of them since then, a fact that both surprises and delights me.

Part of my job is also to make sure that the lighting and stage are set up the way they want it. So I spent some of Saturday down at the theater cobbling together a rough front wash of lighting and getting various curtains and travelers set up. The girls came in with me to help out – Kim spent the weekend doing Associate Dean things, so really they had little choice in the matter – and they had a great time running around on stage while I brought lights up and down. Being able to see bodies on stage helps immensely, so I was glad to have them.

Sunday I had to go in early to finalize the lighting and help the performer get situated, and Lauren said she wanted to stay with me. So after a few hems and haws, I told her okay, but she would have to be on her best.

She helped me with the lighting again, and was interested to see how the board worked – she spent a happy time learning the dimmers and bump buttons.

She helped me check lighting levels.

And she hit it off pretty well with the performer, who it turns out has a daughter about her age.

So when the show started, guess who got picked as one of the volunteers. 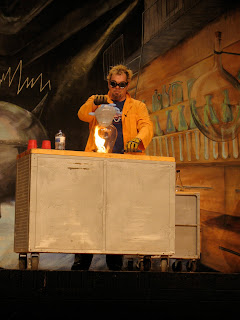 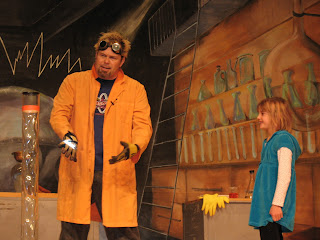 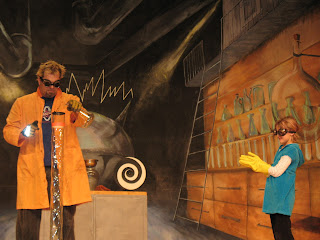 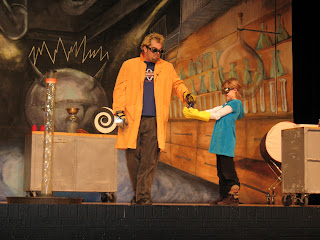 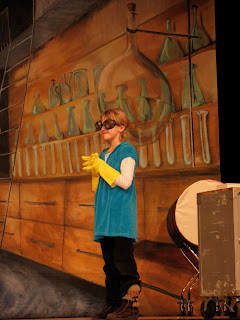 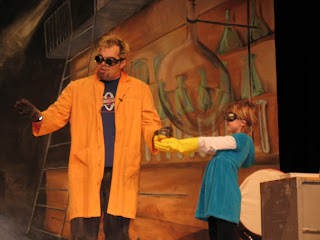 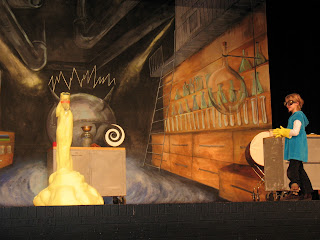 I wish I could have made it--I love his shows, I watched him at the Bristol Renn. Faire in 2009 and I really liked his show! I am glad Lauren got picked for the performance, and glad she had fun!

She looks like she had a blast! I was working and missed it but am glad it went well!