Saturday On The Fly

We spent Saturday cruising through the entirety of southern Wisconsin, which is a neat trick if you can manage it. It's a pretty state, but a big one.

Every Girl Scout troop in the surrounding area codes decided that they would all, en masse, descend upon one of the big waterparks up in Wisconsin Dells Saturday morning - the one named, in a move that probably won the Mega-Marketing Award For The Irony-Impaired, after the desert - and there was just no way that Tabitha and Lauren would miss that. They LOVE waterparks, and they especially love the big ones up in the Dells. They’ve been to a number of them, largely because of various conferences and meetings that Kim has had to attend in that town. If you’re going to go to a hugely entertaining but massively expensive tourist trap, you should make sure that the state is paying for most of it I always say.

Like most of these waterparks, this one is not an experience that lends itself easily to measured description. It is a monument to excess, and one that has only expanded over the years. We went there about five years ago when it was just a waterpark, and it was astounding – three football fields of waterslides, pools, rafts, hot tubs, and a lazy river ride longer than some drainage basins, all surrounded by thousands of hotel rooms. Since then it has sprouted an indoor amusement park (complete with a three-story Ferris wheel), several thousand more hotel rooms, and in all probability its own government, rebel movement, and currency. It’s truly astonishing. And then you add several hundred screaming Girl Scouts, and your day is just complete.

Adventures in noise, that’s us.

We spent most of the morning and afternoon there, careening down tubes in rafts, wading through wave pools and eating pizza slices that were, quite literally, as big as our heads. Irony-impaired they may be, but the folks who run the desert waterpark are very much in tune with their target audience nonetheless. Tabitha is now old enough and a good enough swimmer that she can light out on her own, which she did until that got boring. Meanwhile, Lauren and I spent a lot of quality time relaxing in the hot tubs and Kim alternated between wading around and relaxing with her novel. A good time, as they say, was had. We all were fully chlorinated and happy by 3pm, which is when we had to leave.

For you see, it was Home Campus night at the minor league baseball franchise near our town! We got dried off, dressed, and back on the highway and sped on down in time for the picnic of burgers, brats and snacks. Yessirreebob, it was a Heart Healthy Day all around.

For those of you who have never been to a minor league baseball game, well, you’re missing out. You get to sit right up close, especially in the middle of May. There are all sorts of promotions and goofy entertainments between innings. The team mascot jogs around in costume, signing everything people shove into his claws. And somewhere in there they play a baseball game. How can you not love this?

We are the kiss of death for this team, unfortunately. We’ve probably gone to see seven or eight games over the last four years, and they have lost all but one of them. And they lost on Saturday too, despite leading by five runs going into the sixth inning. I suppose that's the sort of thing you expect when your mascot is a reptile and it’s cold out – everything slows down under those conditions – but it was sort of disappointing nonetheless. We had a great time, though. The girls sat through the entire game and even showed some interest in it (Tabitha and I discussed the nature of shortstops for a while; inscrutable things, shortstops). There were friends to talk to. They did the traditional “Seventh-Inning Stretch” renditions of “Take Me Out to the Ball Game” and “The Beer-Barrel Polka.” Yes, "The Beer-Barrel Polka." Wisconsin has different traditions than you do. Deal with it.

And the turtle signed the girls’ baseballs. 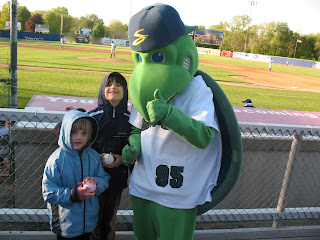 We finally got back home about fourteen hours after we left, and poured the girls into bed like day-old coffee. Good day, good night.
Posted by David at 4:18 PM