All Hail All Hallows Eve

Halloween is always a big time around here, and not simply because of the inordinate weight that midwesterners tend to place on this holiday. Nor even is it because of the inordinate weight that we tend to put on afterwards, given the blizzard of sugar that descends upon us. No, it's because Halloween is really two holidays here, both of which revolve to a significant degree around, well, sugar. Not only is it the annual costumes and treats day, but it is also Lauren's birthday, and believe you me she makes sure we're as excited as she is.

Our Halloween was a long time coming this year. The Michigan Mosquito Festival was an enjoyable kick-off to our holiday, for one thing, and we made several trips out to the pumpkin patch to get things jumpstarted closer to home. The house was festooned with gourds of all descriptions for most of September and October, and there were even a couple of small pumpkins which Tabitha and Lauren drew scary faces upon with Sharpies. We set them out on the porch, but the election volunteers kept knocking anyway.

The holiday got started in earnest last week, though, with the Trick-or-Treat run at Not Bad President Elementary School (because you know, what this holiday really needed was another opportunity to collect more sugar). I am the Room Parent for Tabitha's class (I volunteered for Lauren's class too, but kindergarteners are so much more volunteer-ready than 3rd-graders and there were a lot of parents who signed up for her room; I was the only volunteer for Tabitha's class, though. Lauren is still bummed out by this), so I was in charge of recruiting another volunteer to stand with me while the kids marched by and hand out candy on Wednesday night. We got the girls into their costumes - a black cat for Tabitha, a white mouse for Lauren, accurately reflecting some of the household dynamics around here - and set them loose. Kim volunteered to hand out candy at Lauren's room, so they got to get candy from both of us. It was quite a parade, really - a lot of the teachers showed up in costume, and several hundred kids made an impressive but not altogether successful attempt to absorb the mountains of candy that had been donated.

Then the kids were off school for two days. They said it was for some sort of educational purpose, but really it was because the school district didn't want to deal with all those kids on their sugar highs. An entire school full of kids vibrating at those frequencies is enough to tear bricks from their mortar, and in these economic times finding repair money is not easy. Better to let them vibrate at home, where you don't have the critical mass of kids needed to damage infrastructure.

On Thursday we finally got around to carving the two big pumpkins that we had ordained for sacrifice to the bright orange god of pumpkinhood. The girls are old enough now that we let them handle a lot of it on their own, and they had a good time. It was a lot like the zucchini boats, only more so - there was much Drawing Of Designs, followed by Cutting Of Outlines and the inevitable Scooping And Flinging Of Internal Ick. Nothing a good garden hose couldn't wash away, though. We put them out on the front porch, and there they remain - unsmashed by teenagers, unable to scare off election workers, but silently taking it all in with their gaping smiles and quizzical expressions. Joe the Pumpkin lives. 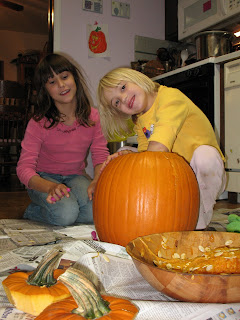 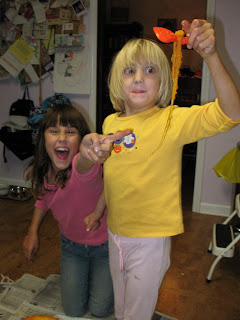 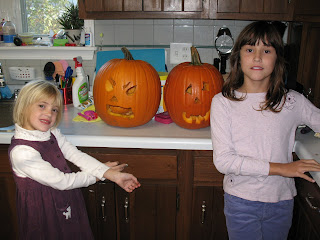 Though with excellent results,
provided you are not the pumpkin yourself
On Friday got our traditional Halloween visit from our friend Dave, who handles candy distribution while we take the girls out and about. We promised him dinner, but I manage to immolate all of the burgers on the new grill (and I do not exaggerate here - I left them to warm on the top rack and when I got back they were on fire. Still getting the hang of this "cooking" thing, I suppose). We once again stuffed the girls into their costumes - ears, outfits, facepaints and all - and set out about the neighborhood.

There is something unspeakably wonderful about a holiday where you are encouraged to go up to people in their own homes and demand that they give you treats. It's inspiring. It certainly made the girls want to hit every house in the area code. We tried, but there is a time limit on trick-or-treats (or "chucker-treats" as Lauren insisted on saying for the first part of the journey - when Kim corrected her, she ran up to Tabitha with the news: "Guess what!" she cried) in our little town, so there was only so much we could do. Not that they didn't end up with full baskets and even more full tummies - only a true grinch would try to limit candy consumption on Halloween night. There's time for moderation the other 364 days of the year.

Lauren got even more candy than Tabitha, as usual. In part this is because she can eat peanuts and tree nuts, so she has a wider field of action than her sister. More to the point, it is because Halloween is her birthday. "Chucker treat!" she announces at each house. And then, "today is my birthday!" The victim then turns to either Tabitha, standing beside her sister, or me or Kim, standing out on the sidewalk, and we confirm this fact for them. "Oh," they say. "Have another treat, birthday girl!" It's a righteous scam, dude.

We decided that trying to hold Lauren's party on the day was not going to work. This isn't a big problem in our family, given the Movable Feast Tradition that we subscribe to: holidays happen when you've got time for them. My birthday, hard up by Christmas, is not something that anyone (including me) wants to celebrate on the actual day. So we wait until we're all recovered and have some breathing time, and it works much better. So Lauren's party was on Saturday.

Recognizing that trying to clean the house for this would be a lost cause, we decided to have it at the museum that I used to run. The new building that I spent most of my time there shepherding through to near-completion has a room specially designed for small events - big, open, and well-lit, with beautiful green floors and a kitchenette. So Lauren invited a bunch of her friends and family, and the party was on! It was a costume party, so once again Kim shoehorned the girls into their outfits, and we moved our supply train up to the museum for the festivities. 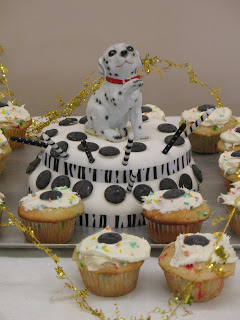 It was a fun party - Kim made a special cake that Lauren and Uncle Geoff had designed (it was really good except for the fondant icing, which even the kids agreed was much better looking than tasting); there were games such as "Pin the Face on the Pumpkin," and the crowd favorite, "Turn Your Friends Into Mummies With Crepe Paper." There were nice presents and good times. Who could ask for anything more? 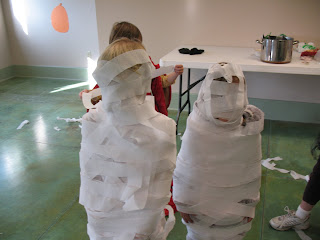 Lauren and her friend Claire, we think. 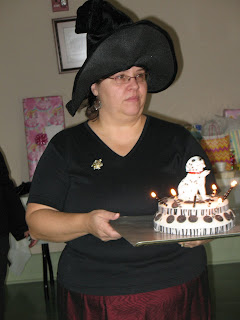 Kim brings out the cake, to great applause.

That night, for the second night running, I read A. A. Milne's poem, "The End" to Lauren. It seemed appropriate.

But now I am six, I'm as clever as clever.
So I think I'll be six now, for ever and ever."

Lauren is happy to be six, but she says that it doesn't feel all that different from being five, nor does she want to stay six for the rest of her life. She's got a good perspective on things, I think. 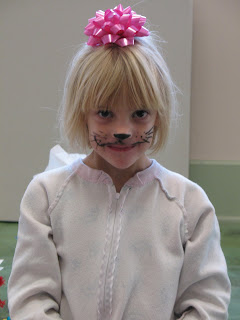