I spent a good portion of today walking in circles and talking to cops. It wasn’t a bad way to spend an afternoon.

It’s been a long week or two here in the Badger State. The situation in Madison has not gotten much better over the last week, and in some ways it has gotten worse.

For example, Governor Teabagger, a wholly-owned subsidiary of Koch Industries, was caught on tape the other day discussing his plans to seed the peaceful demonstrations with troublemakers. The only reason he has so far not sunk quite to this level is not – as you might expect – because putting the citizens and law enforcement officers under his jurisdiction at risk of their lives and safety to advance a political agenda would be a morally bankrupt and legally actionable dereliction of duty, but instead because he feared that the justifiable outrage at such a tactic might cause the public to demand he actually govern instead of just making peremptory demands and expecting obedience.

The Madison Police Department has noted its displeasure with this rather casual approach to their health and well being, and it will be interesting to see where this ends up.

There was more on the tape as well – threatening to go after demonstrators with a baseball bat, agreeing to take illegal quid-pro-quo donations from a supporter, discussing how to trick Democratic state senators into coming back to Madison under pretext of negotiation and then ramming through his bill unchanged once they showed up, and on and on. What a piece of work, this guy. What astonishes me is that the guy didn’t have the brains to deny he said any of it – that he seems proud of himself for thinking up these kinds of penny-ante tin-horn dirty tricks.

Nixon would have eaten this guy for lunch. And then he would have conceded on collective bargaining, taken the financial concessions offered by the unions, declared victory and figured out some other way to get exactly what he wanted while leaving his opponents with the shell of what they thought they had. Say what you will about the man – say that he was a certifiably paranoid schizophrenic, a divisive and damaging political strategist, a drain on the Constitution, and, alas, a crook of the highest order and lowest character – but very few American politicians could operate the way he could.

Seriously, Teabaggers – this is the best you can do? This guy is your standard bearer? All of the division and damage, with none of the gains? This is the guy you’re hitching your wagon to? And you wonder why civilized and decent people hold you in such disdain and contempt.

So, needless to say, the protests continue.

Madison is on my way home from Not Quite So Far Away Campus, and I decided I’d stop by and spend some time expressing my Constitutionally-protected rights of free speech, freedom of association, and the freedom to petition my government for redress of grievances.

I got there just as the firefighters were leaving.

You have to understand, the firefighters were explicitly spared Governor Teabagger’s axe in this bill. The fact that they are there anyway, standing with us, is a thing of beauty. Perhaps it was just because they knew they were next. Perhaps it’s because firefighters spend their lives bailing others out of trouble. Who knows. When the bagpipes skirl and they march by in full turn-out gear, you just have to be glad they’re there. 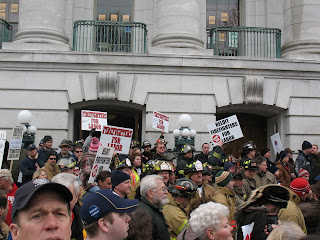 I marched around the Capitol for a while, holding my sign. It turns out that wearing my Philadelphia Flyers cap was a good plan, since the color for this rally seems to be orange. Many of the protesters and remaining Democratic legislators wear orange shirts. It was nice to be on the correct side of fashion for a change.

It was a smaller crowd than last time, as befit a grey, wet Thursday afternoon – maybe three or four thousand people, roughly split between those making the circuit around the outside of the Capitol and those in the Rotunda. Once again I was impressed with how clean the place was – it looks worse on most Farmer’s Market Saturdays, and everywhere I looked there were people carting things to the trashcans.

I actually made a point of stopping and talking with the police officers standing watch over all this. They were friendly and willing to talk, and every single one of them – EVERY SINGLE ONE – made a point of saying how civil this all was. How there had been no complaints, no troubles, no real need for them to be there at all up to that point, other than to give people directions and point them away from restricted areas.

There is no “riot,” folks. Anyone who tells you otherwise is lying to you and trying to sell you an agenda. I was there. I spoke with the people who would know. It’s loud. It’s raucous. But so far Governor Teabagger has not succeeded in making it violent.

Eventually I went inside to the Rotunda, since it was cold and it seemed like that was where the action was. 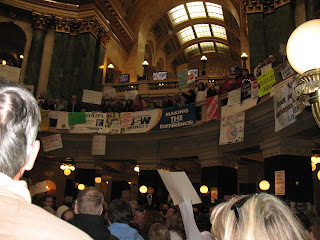 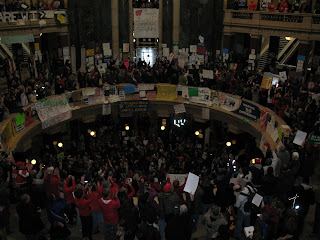 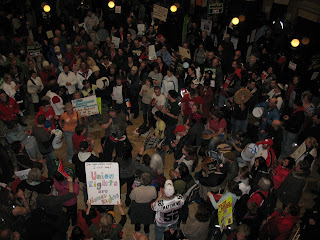 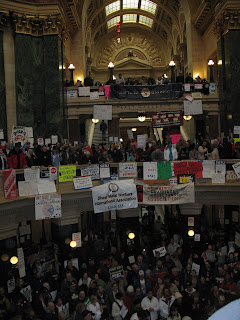 At one point some of the Democratic House members came out, to thunderous applause, but for the most part it was just the crowd itself, speaking, listening, and upholding the highest standards of American citizenship.

There are times when I find the actions and attitudes of this country appalling, but I am always proud to be an American and it is moments like these that confirm that.

It got even louder when the cops came in. 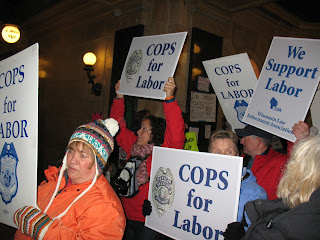 There was a lot to see. From clever protests to impassioned signs to doors covered in thank-you notes, there was simply a lot to see. 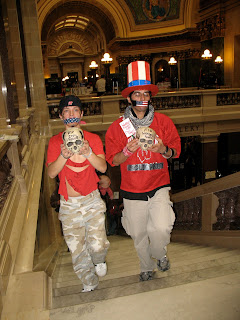 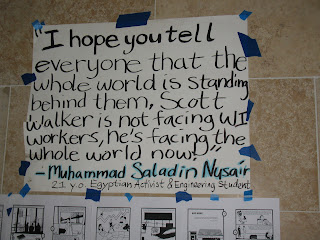 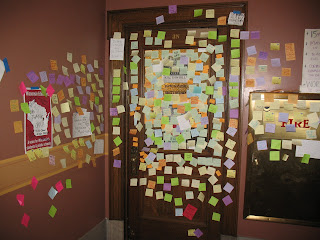 Just about the time I was ready to leave, Wisconsin’s senior Senator, Herb Kohl, arrived. I almost walked right by him – an easy thing to do, as he is not much taller than Tabitha and had arrived without media fanfare or security entourage – but he was gracious and shook my hand, and I thanked him for coming out. 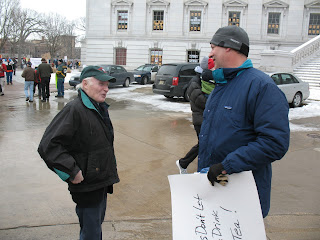 I made a few more circuits of the Capitol, and then it was time to leave. I can only hope that somebody will take Governor Teabagger aside and talk some sense into him sometime soon. Otherwise it’s going to be a long winter. One can only hope that tape was his Watergate. Sadly, I feel the Conservative spin machine has grown too powerful to let that be enough, however, one can still hope. Maybe something might come of the legal action that's being perused against him, can always hope for that too. A former attorney of mine is now an assistant attorney general, so I plan on asking him some questions regarding the matter, just have yet to hear back from him.

I have to admit, I feel almost hypocritical desiring legal action against Walker, however when I look at legal actions that has been brought against politicians in the past and how trivial those were, it helps me feel a little more justified, especially considering what is at stake.

I've been up there nearly everyday, and I plan to keep it up. As I keep telling people, we will not allow anti-union, anti-labor, and anti-education sentiment to propagate any further; we are the gatekeepers.

Your protest made the French news because it was mentioned by the protestors in Tunisia or Egypt... I forget which one.
In France, we call the Teabaggers the ultra-right.

I just looked at your photos more carefully. Twas an Eyptian activist.