Our Trip to Puerto Rico - We Dine

My favorite things to do when we travel are wander about in cities and find good food to eat. What can I say? I am a simple man.

The first order of business when I woke up on our first morning there was to go to the nearest grocery store and stock up on breakfast and snacks. We knew we’d be eating lunches and dinners out, but first thing in the morning it’s good to be where you are and nibble. Fortunately the apartment came with a binder full of recommendations for all sorts of things, including the grocery store. I took a picture of the directions, walked out to the street, and confidently set off in exactly the wrong direction.

There was a time when I had a good sense of direction and mostly I still have it, but too many times recently I have found myself totally turned around in places where it should have been a lot clearer to me. Eventually I did get the hang of Old San Juan and could navigate comfortably around the neighborhood, but that first morning I ended up at the fort and that was just entirely the opposite way from where I wanted to go.

It was nice to see the fort, though.

After getting back on track I did find the grocery store. I love grocery stores. It’s endlessly fascinating to see the sorts of foods that people find normal, since they’re always different from the things I find in my own grocery store. I found cheese and sausages in new varieties, and crackers to put them on. There was milk and orange juice. Cereal. A few other things, all which I then had to schlep back to the apartment which was further away than I remembered it being and uphill.

After breakfast we decided to go to the fort and, well, I already knew the way there so I suppose the morning’s adventures weren’t totally wasted. We cut through the Plaza de San Jose, turned left, and found the water ice guy. 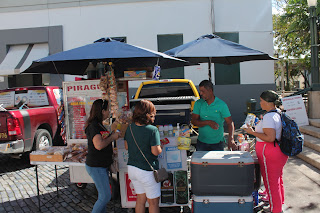 You can’t beat good water ice on a hot day and as far as I was concerned every day in San Juan was hot, so we got in line. It was far too sweet, but tasty. 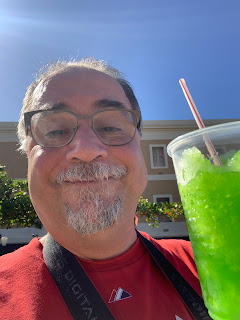 For dinner that night Kim wanted to try mofongo, which is a Puerto Rican specialty involving plantains and pork. Fortunately in my travels that morning I had passed by a place next door to the grocery store that had the word Mofongo right there in its name so we went to try it.

The rest of us ended up getting other things, but Kim said the mofongo was good. At least that was what she ordered. Most of the rest of our food wasn’t quite what we asked for, but you had to admit it was good food nonetheless. 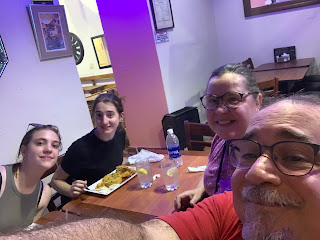 The best place we found in Old San Juan – the only place we went to twice – was a tiny little hole in the wall bar that was proudly local and served drinks and empanadas. It was, not surprisingly, called Birra & Empanadas, and I can highly recommend it to anyone heading down to San Juan. We stumbled across it by accident on our second night there – it was maybe half a block from another place that had gotten good reviews and had the line of customers outside to prove it, a line that was moving slowly enough that if we had hadn’t left we’d still be in it even now and we were hungry enough to move on. We were there for a very late lunch after not eating much at the beach, and we ended up going back there for dinner for our last night in San Juan as well. I liked this place better than the one out by Yunque, though Kim feels differently about that. They were both wonderful.

“Birra” means “beer” in Italian. It doesn’t usually mean that in Spanish – “cerveza” is the more standard word – but apparently it can.

The entire place was maybe the size of your living room. It had two entrances that were about eight feet apart, though there was no interior partition. The right entrance opened onto a crowded bar, while the left entrance led to three or four small tables tucked along the wall. There was a table on the wall between the entrances too. As noted, their entire menu (nowhere written down) consisted of drinks and empanadas, as well as a wide variety of squeeze bottles full of different hot sauces that people passed around from table to table. It was a friendly place and the empanadas were inexpensive, hot, stuffed full, and tasty, and really what else do you want from a place to eat? You order the empanadas by the kind of filling and they keep bringing them out as they were ready, and sometimes you get a plate and sometimes you just put them on a napkin, and it was glorious. I’d go back. 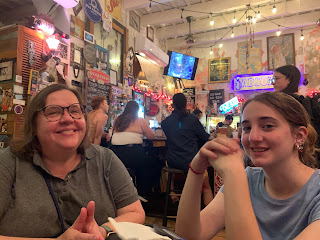 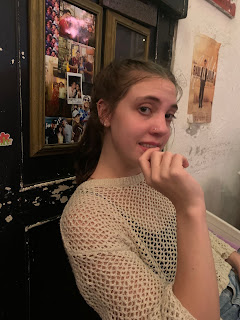 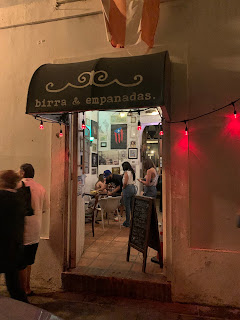 There was another place on a steep hill that where we had dinner a couple of hours after our first trip to Birra & Empanadas and I have to say that I grievously underestimated how much food they were going to give me and overestimated how much I would enjoy carnitas. They did a good job with the food – if carnitas are your thing these were in fact good carnitas – but circumstances conspired against them. 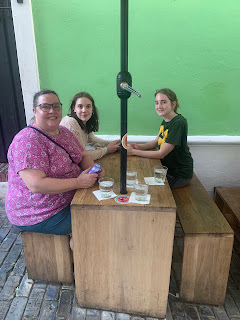 There was one night where we ate in our neighborhood at a place just across from the Plaza, a few doors down from the apartment. The food was good but you could tell that the place catered to the tourist crowd. Granted, we were tourists. But still. Perhaps the most obvious sign of this was the large table maybe fifteen feet away from us that was empty when we got there but was soon filled by an entire tour group of people significantly older than me plus a very hardworking local guide who loudly and patiently explained everything that was served to them, from the drinks to the food. I don’t think they had a full meal – they were in and out far more quickly than we were – but it was fascinating listening to her and I learned a few things in the bargain, so Win.

Somehow I also got ghosted by a coffee shop.

The morning I set out on my own to explore the neighborhood and take photos I distinctly recall walking by a coffee shop named Mistic Coffee – the lack of a “y” in the first word stuck in my head – and thinking that this would be a good place to remember for Kim, who likes her coffee in the morning. They even had a menu posted on the wall, a large black plastic square with many items on it, some of which I remember contained mushrooms because that’s just not what I would expect in coffee but I prefer tea so what do I know about coffee?

I never found it again. We looked for it. I even searched for it online. It vanished into the mist, leaving only the faint sound of laughter on the breeze, and Kim had to get her coffee elsewhere.

One place that wasn’t imaginary was El Batey, which Kim, Lauren and I wandered into while Sara was back at the apartment resting. This is another hole in the wall bar, but it’s much more famous – apparently this is where the Rolling Stones would hang out whenever they were in town. Alan Ginsberg read his poetry here, and Hunter S. Thompson wrote one of his books here as well. It was maybe a block or two from the apartment, so we had to stop by.

It’s covered with graffiti that probably hasn’t been cleaned or painted over since the place opened shortly after the Spanish colonized the island, and you can get whiskey there, which is what I had. Kim got one of their specialty cocktails – something with rum in it – while Lauren stopped at the bubble tea place next door and brought that in. While we were there a group came in to look for some of the graffiti they had scrawled in that room a decade or so earlier. They didn’t find it, but it was interesting that they came by. 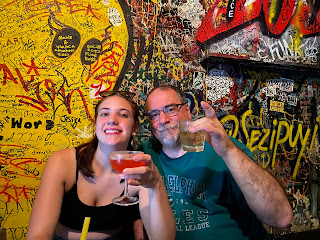 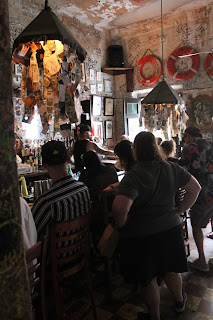 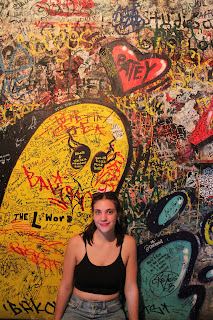 The other food adventure was something that Lauren and Sara shared on their own one night. They wandered down to a place near the grocery store called “Mr. Weenie Waffles,” which is exactly what it sounds like. For some reason penis-shaped things are popular items in Old San Juan – at least if you judge by the trinkets in the gift shops – and this was of a piece. They said they were good waffles. 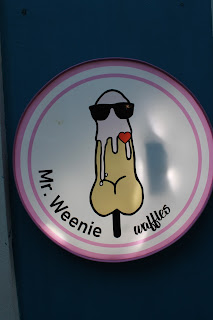 They also had the female version, for those so inclined. 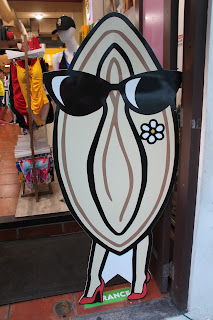 So we did not go hungry on our trip, and I will remember those empanadas fondly.
Posted by David at 10:02 AM