My memories of holidays when I was very young are suffused with the light of a thousand suns.

Or one movie light. It was hard to tell sometimes.

My grandfather had a Super 8 movie camera that was a pride and joy to him and it would come out every Christmas, Thanksgiving, birthday, or other significant event that took place at his house or, in the case of weddings, any nearby church. It was a small, handheld little thing and each roll of grainy film lasted about five or six minutes which meant that there were a lot of short snippets of action as he tried to cover everything that was happening. Super 8 film wasn’t very light sensitive so the camera came with a floodlight that etched everything in white glare while you were living through it, though it looked good on film. Without it the film just came out muddled and dark.

He'd haul it out and spend time happily capturing various moments – we learned to ignore him so he didn’t have to have us staring into the camera all the time – and when he’d finished the roll we’d be plunged back into the relative darkness of ambient light, returned to our holidays.

Several weeks later the film would come back from the processor and we’d find out how it turned out.

My grandfather was not a great cameraman. People would routinely get lost out of frame or have various body parts cut off by the edge of the action, and he had a rare talent for focusing on things in between things. But they were good memories and we enjoyed them when we saw them.

Just the other day my brother sent links to some of the movies that he’d had digitized so we can all see them again. It’s a treasure trove of the 1960s and 1970s.

You forget, in this age of iPhones, that those old movies were silent. People come onto the screen, obviously talking to each other or laughing at something, caught in the middle of a moment, and their mouths are moving but nothing comes to you as you watch. It’s kind of eerie, in a way, as if you were a ghost outside of the flow of time, watching events through a filter, which of course in a way you are.

So many of those people are gone now. My parents. All three of my grandparents. The great-aunts who would only come by every few Christmases even though they only lived forty minutes away. All just memories and images on film. 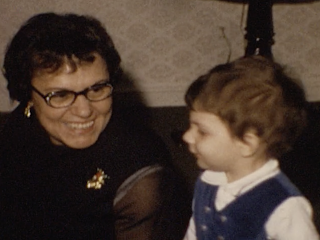 My grandmother is almost exactly my age now, in this screen grab from Christmas 1970. She’s looking at my cousin, who is all of about sixteen months old here and I can’t tell if he’s blurred because of the way my grandfather took the shot or if that’s just how sixteen-month-olds are. But she looks happy, and even now I can hear the whooping laugh that she had when things struck her just right. This is my brother and my parents, Christmas Eve 1979. 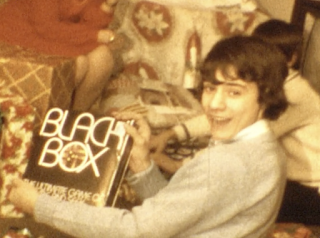 And me, a bit later that evening, when it came time to open gifts. We never did play that game more than a handful of times as the rules were fiendishly complicated – or at least more complicated than we felt like dealing with – but I was excited at the time. I still have it somewhere. Maybe I should give it another shot. 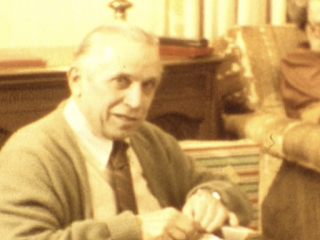 This is the man himself, the photographer photographed. As we got older we’d each take our turns with the Super 8. It was something of a rite of passage. The gift he’s opening is a handheld calculator, which was an impressive thing in 1979.

Eventually the Super 8 got retired, and for many years after that we just had still photographs – they’re easier because they don’t take the photographer out of the moment for so long. You can take your picture and still be part of the celebration.

But there is something about seeing people move – especially people long gone – that can’t be duplicated by a still photograph.

I’m still working my way through all of the files my brother sent. It’s a lovely and rather bittersweet way to spend an October weekend, and I’m glad for it.
Posted by David at 3:35 PM

[hijack] My father's monster, er, ah, mother (I refuse to use the word 'grand' in association with her memory, but that's a whole 'nuther rant) had her daughter, my father's sister, learn how to use a Super 8, and she burned up about a Hollywood's warehouse full of film over the years. A few years back my sister obtained a CD filled with 3 hours of those nightmarish memories and sent it two me.

I spent an entire weekend slogging my way thru carefully edited images and listening to a professional narrator that was hired to tell the lies my father's sister had written to accompany the images. 🤮

I destroyed that CD before I realized that I could've burned a duplicate and muted or deleted the audio, but it didn't matter after all was said & done - I could never have erased what my mind had heard, so, there is that. My sister still has a copy - she can keep it safe for ... whoever may have an interest in it.

You'll no doubt notice that I (justifiably) intentionally avoid using traditional titles (e.g.: Aunt) when referencing members of that part of my family. Someone somewhere once said 'you can pick your friends, but not your relatives'.[/hijack]

I am overjoyed for the opportunity to vicariously meet the members of your family, and share, in some small way, the joy of your family's love. That is as it should be.

In our family, my wife and I have striven to avoid the blunders that destroyed the familial relationships of the families in which we were raised. It is my sincere hope that we have in some way achieved that goal.

It's a terrible thing to treat people so poorly that the mere memory of them is enough to spark such anger. As a historian there is a bit of me that is always sorry to see records destroyed but as a parent I can't blame you at all. You are under no obligation to preserve any ties to those who mistreated you, not even in memory.

I've always been grateful for the family I was born into and the family I have made. We're not a big group but we are a close one.

From what I have come to know of you I know that you worked hard for your goal, and I hope that you have succeeded.

Someday we need to share stories and a meal in person.

I feel a sincere need to apologize for that comment; In other venues that would be called out as ‘thread shitting’.

I’m not at all certain that anger is the correct word, though. I’m not sure what word would be a better fit, but anger doesn’t feel ‘right’ somehow. My thesaurus fails me.

That comment came from a very dark place, triggered by just the right combination of words and images (both visual & mental) that evoked some very vivid childhood memories associated with staring into those bright white lights of the Super 8.

I should write a book about my childhood. Probably be a best seller in socially ‘conservative’ circles. I’ve mentioned before that I was born into and raised in a very ‘conservative’ rethuglican family. The comment above points to the sort of mental and emotional abuse that is all too frequently associated with that ‘conservatism’ - something I’ve fought against, not entirely successfully, apparently, for the entirety of my adult life.

It is clear that you cherish the family you have. I find, in these latter years, that I’m more than just somewhat envious. Maybe, that is the word. Not anger - envy - one of the seven cardinal sins … I think I know why it’s on that list.

Wow. Bet you never imagined, even in your wildest imaginations that this post would take such a dark turn. You may feel free to delete this whole comment thread if you feel it appropriate to do so. In the meantime, thanks for a turn on the couch, Dr. David.

Sharing a meal with you & Kim at some point in the (hopefully not too distant) future would be amazing and remains on my bucket list.

No apology necessary - one never knows how words will be received, and if the post dredged up some dark memories well, it's not a bad forum for it.

It has always struck me how the groups that make such a show of "family values" are just shit at actually valuing families. Or, perhaps, they don't particularly care for real families - just shiny ideologically pure facsimiles thereof, which is hard on the actual human beings caught in the middle. Fighting against that is an ongoing task. I remember telling a friend (in a very different context), "You will never get over this - you'll just get through it." All you can do is the best you can, one day at a time.

I do cherish the family I have. We're good people and we've gone out of our way to demonstrate that with each other. We don't always succeed, but we always try. There are darker corners of the family as with every family, but we care for each other - the real humans who make up our family. This includes in-laws and found family as well. We're a good group, and I try to acknowledge that.

We will break bread together, you and I and ours.

I hope to join y'all. Lucy: I'm just a bystander, but it's worth noting that I value your comments here. And I'm sorry about the family stress. Watching my sons turn out basically OK so far is the thing that makes me most convinced I may not be all bad :).

Ewan, you and yours are welcome at the table.

It is a lovely thing to watch your children grow up into fine adults. It's a kind of message from the world that you did okay.