This has been the summer where people come to visit us.

You need those now and then. You can’t go traveling every summer, after all – it gets overwhelming after a while. Sometimes it is nice to stay home and have people come to you, and then you can return the favor later on.

Plus, we seem to be in a bit of a lull, world-wide-pandemic-wise. COVID-19 has stabilized now and, with vaccines freely available, it is mostly a voluntary form of death rather than the rampant killer it started as. Monkeypox is on the rise but so far hasn’t become a huge deal outside of fairly specific circumstances. No doubt that will change, as previous such diseases changed, so we will be keeping a close eye on that (as you should too). But for now it’s a lull and we’re going to enjoy it as best we can.

Not long after our Swedish friends left we had visitors from Up Nort’, as they say here in Baja Canada. Our friend Sherry moved way up to the northern fringe of Wisconsin a while back so it’s always good to catch up when she ventures into the deep south here, especially since she brought her new fiancée Evelyn to meet us. There were homemade pizzas and glasses of Italian wine and some lovely conversations, and we’ll look forward to having them over again. Or, as noted, venturing north to visit them sometime. 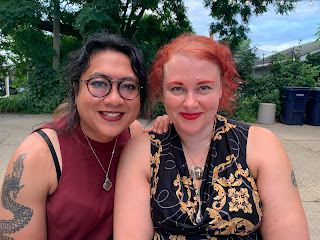 Last Saturday my brother and my niece drove out from the Correct Time Zone to stay for a few days, which was a grand time for us. They don’t usually drive this far – day-long drives are a midwestern habit that mystifies people in the Northeast Corridor, for whom there is nothing of any conceivable importance that is more than a two-hour drive away, even if you can only get about ten miles in that time on occasion. It was a shift in mindset for me when I moved out here, I’ll tell you that. But it’s a relatively simple drive thanks to the interstate system, and as long as you don’t grow old and die trying to get around (or, if you miss the turn or if the GPS decides to get angry at you, through) Chicago it’s pretty straightforward.

The first thing we did was hit the County Fair, which is a proud bit of Americana that gets culturally more important the closer you are to the nation’s tender midsection. It’s been kind of a strange year for us with the Fair, since this is the first year since 2009 where we didn’t have a kid showing projects or the adult responsibilities that come with same. We could go as guests! Whenever we wanted! Or not at all! No barn duties! No selling cream puffs at the 4H tent! We could even leave whenever we wanted! Honestly, it was kind of strange.

That’s where we were when Keith and Sara arrived, actually. We’d gone there Saturday for dinner (mmmmmmmmm …. fair food ….) and met Lauren and Maxim there for the show that night – a comedian who has made a fairly good living by defining, living, and gently ridiculing midwestern stereotypes. He was good, though his opening act was rather tiresome, I thought. But opening acts are there to be ignored, so we had a good time anyway. I left a bit early to be home for when Keith and Sara drove up, and eventually everyone gathered in the living room, catching up.

We went back to the Fair the next day with Keith and Sara and wandered around the place for a while. It’s smaller than it was pre-pandemic – 4H, like many community organizations that center on meetings and group projects, was pretty hard hit by COVID-19 and it will take a while to rebuild it – but there were all sorts of projects and sights to see. We watched the duck and piglet races, toured through the animal project barns (Beef, Dairy, Poultry, Rabbits, Swine, and so on), visited the Art and Craft projects, and found a spot in the Bingo tent to eat whatever moderately non-lethal food that we could find at the Fair. 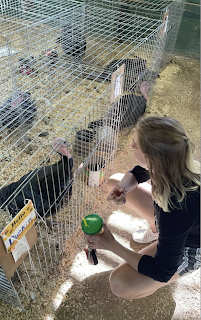 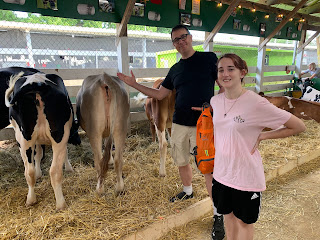 I just want to say, in my defense, that it did occur to me that perhaps I could have taken that last photo from a slightly better angle, cattle-wise, but unfortunately this did not occur to me until after we had walked on a bit. I suppose it’s more authentic in a way.

Also, on the subject of “moderately non-lethal food,” the mini-donuts come in a bucket with more than you can eat if you’re over 40. Just a head’s up. We gave it a valiant effort, though.

We did a lot of eating on this visit, because that’s what we do. Good food, good company, good conversation – what more do you want out of life? 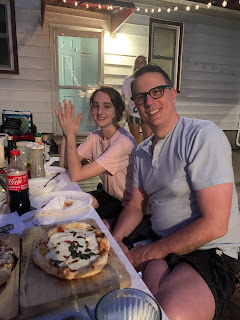 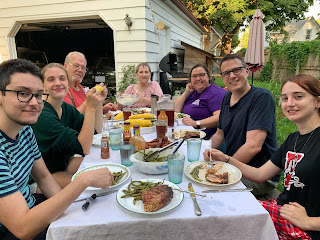 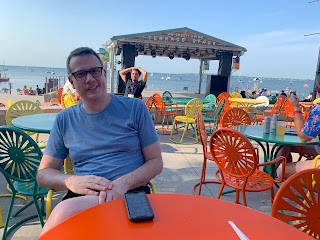 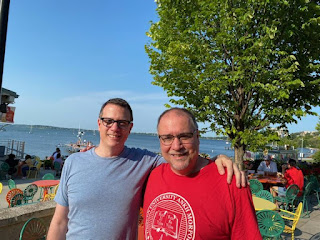 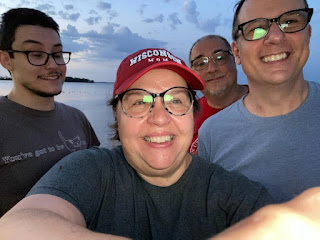 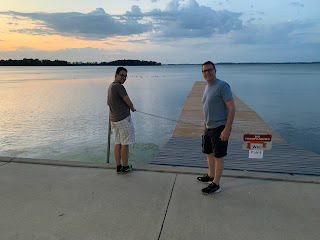 But mostly it was a visit to hang out together. There’s always at least one very late night of conversation whenever we get together, and it is a lovely thing to have people in your home who just fit in and act as family, especially when they actually are family. 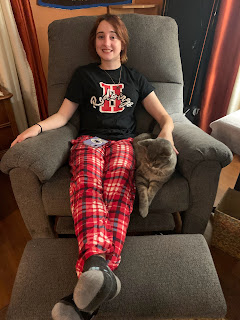 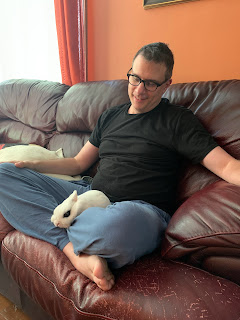 They’re back east now, and the place is eerily quiet again. But Lauren will be home for a few days pretty soon, and we have one more set of friends who will be here in a couple of weeks, so the Summer of Guests will continue.

And this is a lovely thing.

Me thinks one or more of those pronouns doth not belong thrust upon my mental capacity. I could might have been mistake. n.

County fair doesn't knot start up here 'til Labor be celebrated. And Grammarly is throughing a conniption fit over this poast. All goodly not the lessor.

And, Just for the Record, the cow pic is purrrfect.

And Grammarly should have conniption fits. Speaking as someone who has a PhD in late-18th-century America, when spelling and grammar were a bit more, democratick, shall we say, I get very tired of being corrected by a machine.

I do, however, occasionally find need to write this on student essays:

I crack myself up sometimes.

Glad that you liked the cow pic! It's ... entertaining.