A Good Day for a Graduation

Somehow I have become the proud parent of a college graduate.

I mean, I know how this happened. I have followed all of the steps eagerly, in fact, from the various college tours that we took back when the world was blissfully unaware of the coming pandemic, to the classes and the shows and the bills and the advising and all of that, each thing following after the other in an orderly fashion. It all seemed so timeless, and yet suddenly that time has come to an end.

Kim, her mother, our niece Marin, and I drove down to the little B&B that Kim had the foresight to reserve long ago, because even though the S in SLAC stands for Small the town is yet smaller and things do fill up. It was a very nice little place and we highly recommend it. We never did manage to see Oliver that night, which is only to be expected as the campus kept him pretty busy and really he can see us for the next year but his friends were soon to scatter to the winds. One must have priorities.

We did go out to lunch on Saturday, though – a lovely place in the next town south where the parm fries are excellent and the outdoor seating plentiful. We sat and ate and talked about all sorts of things, and all was good. 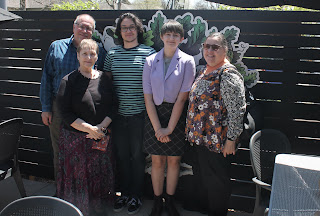 The Baccalaureate Service was that evening, down on the football field. It was a bright sunny day, rather warm for what we’ve had here in the midwest this year, and we sat there in the bright sunshine while the carefully nondenominational service wound its way through it courses. The chaplain chose a painting theme for her talk – how each layer is the foundation of the next, that sort of thing – and afterward all of the graduates who chose to attend got a paintbrush. 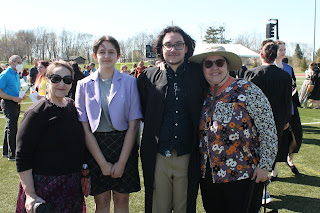 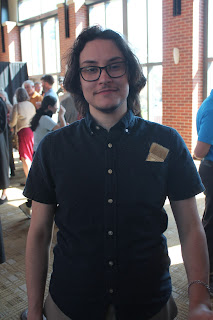 The actual graduation was Sunday morning, which was a lovely November day that somehow got transplanted into May – grey, chilly, and with winds gusting up to 40mph. At one point I watched some of the sound equipment get blown several yards across the field. It was supposed to rain – we ended up getting maybe a dozen raindrops – so they gave everyone one of those disposable ponchos and told us that the ceremony would not be postponed and umbrellas would not be allowed, so a lot of people just put them on and every time the wind would gust the whole place sounded like a gift-wrapping festival.

The graduates eventually marched in and made their way to their seats. 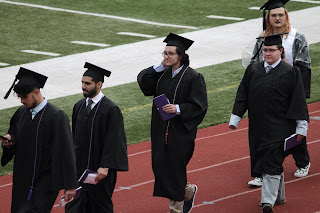 It was a very nice ceremony, with a few speeches and some chasing of windblown items, and in the end the graduates all were called by name because they worked hard for that moment and should be recognized by name and they walked across the stage to get their diploma – or at least the case for it, since it’s hard to coordinate that in advance. They could pick up their actual diploma at the brunch that followed immediately afterward in the Commons – Oliver’s has a handsome gold sticker to let you know he graduated Magna Cum Laude, which is quite an achievement. I took a lot of pictures and somehow none of the ones of the actual stage-crossing moment really turned out well, but I remember it anyway. 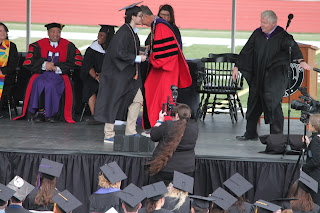 Yay, Ollie!
The brunch was good, and we got a few pictures in as well because how could we not? Are we not the most sartorially elegant sight? 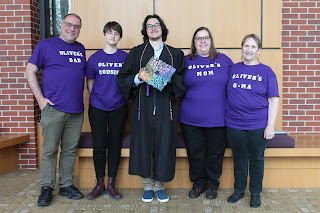 The weekend went quickly and then, suddenly, was over. You can say that about the entire time Oliver was in college. It all goes by so quickly and then everyone is off to the next stage. I suppose that’s the way it always is.

Congratulations, Oliver. I’m proud of you. 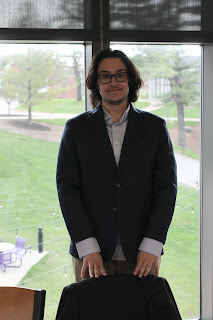 As are we all.

Good lookin' kid ya got there!

Congratulations unto you, Oliver!

(Minor detail seems to be missing - Degree in what field? You need not answer that if that detail was intentionally omitted.)

Thanks! I will pass that along.

He designed his own major (which is a common thing to do at SLAC). It's a combination of history, classics, Latin/Greek/German, and art history that he labeled "European Cultural History." It's like a history major, only more so. Being exceeded by your children is a good sign for a parent, I think.

Not exceeded by. Honored.

So let it be done.

Honoured by. For sure.

Honored it is, then.