One of the first things you learn about Rome is that Romans really don’t seem to care much about the exterior of buildings.

In the US, if a building looks shabby on the outside it is probably shabby on the inside, since Americans tend to see the interior and exterior of a building as a unified whole. This is simply not true in Rome. Often we’d be walking through some historic bit of Rome and come to a little piazza – they’re pretty much everywhere – on which would be anywhere up to three different churches, none of which looked particularly impressive from the street. But they’re all open to the public if you’re respectful, so we’d pick one and go inside and as soon as we’d pass through the doorway – BAM! – Renaissance jewel. Beautiful mosaics and sculptures. Floor to ceiling paintings by artists I’ve actually heard of (Carvaggio seemed to have supported himself pretty well by decorating churches, for example) – artwork that would be the prize of any museum on this side of the Atlantic. Sometimes I’d go back outside to look at the exterior again, just to make sure I hadn’t passed through some interdimensional portal to a more well-maintained universe, but no – it was just as plain and worn down on the outside as I remembered.

I found this a great help in understanding our apartment.

We stayed in a one-bedroom apartment in the Testaccio neighborhood of Rome, which is just south of most of the historic districts (such as the Colosseum and Trastavere) but within easy reach of pretty much everything. There were a pile of bus lines that ran through our neighborhood, for example, and we made good use of most of them to get around the city. And we could walk to most things as well if we were willing to take the twenty or thirty minutes to get there. The weather was gorgeous while we were there – sunny and mild, with highs generally between 60-70F (15-21C) and lows around 40F (4C) – so it was always a great place to walk. But after a while we were reminded that we were no longer 23 years old and took the bus.

The outside of the apartment building looked like this: 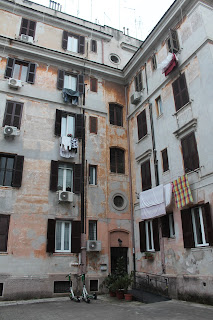 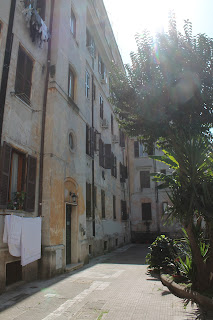 Our apartment was the one with the windows on the first floor, to the left of the entry door in the corner. You had to go up a half-flight of steps to get there once you got inside.

And inside? It was gorgeous. 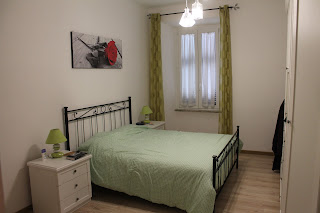 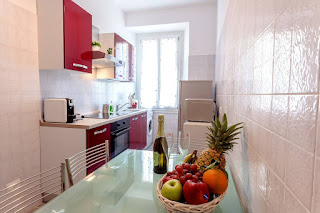 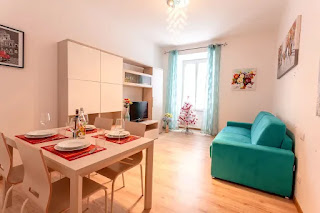 The bottom two pictures are from the AirB&B website, since they’re nice pictures, but other than the random bottles of wine strewn around this is pretty much what it looked like. It was bright, airy, and there wasn’t a single sound-absorbing material anywhere other than the bed and the couch which meant that we kind of echoed a bit sometimes. It was a very comfortable place once you got used to that, and a friendly one.  People would say hello sometimes as we walked through the courtyard. I’d go back.

There was one night where we had simply maxed out and we decided that we’d just grab a quick something on the way back and stay in for the evening. We ended up piled onto the couch vaguely sort of watching Italian television.

This is an experience.

They seem to like game shows, though their game shows are very different from the ones we have in the US. The one we ended up watching a couple of times was a guessing contest where two people – who seemed like regular cast members – would face a group of maybe ten random Italian citizens who were standing on small platforms. There would be a list of ten occupations flashed on the screen, and – without asking any questions whatever of the citizens – the cast members would have to match the person to the occupation. I have no idea how they were expected to do that. “Hmm, you kind of look like you’d be an accountant…” How does that work? The first time we watched the show the cast members actually won, though not the second time. For the final event of the show they’d bring out someone’s relative – a mother, a son, someone – and the cast members would have to guess who this person was related to among the original ten random citizens, again without asking any questions at all, just kind of staring at them. All the while there would be rapid-fire Italian between the cast members and the host that the subtitles – also in Italian – did not really help with. It was a hoot, really.

The apartment was comfortable and we often slept in and had breakfast there before heading out.

Sometimes we’d just wander around the neighborhood. Testaccio is a very urban place and, as noted earlier, the exteriors of things are often well worn. They’re also covered in graffiti, which is everywhere in Rome except for the historic buildings or churches – those seem to get a pass. 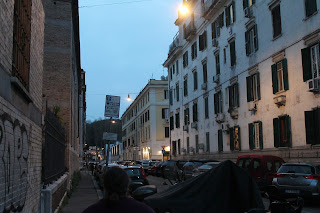 This is the street we were on, Via Giovanni Bodoni. 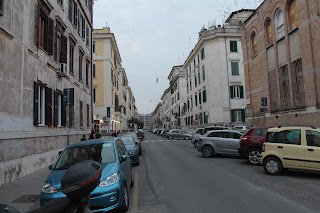 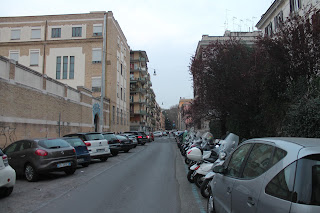 The arch with the blue writing overhead led to a small courtyard where kids would gather for soccer practice, happily running and shouting and dreaming of becoming the next star for the home team no doubt. There was also a movie theater across the street which was our GoogleMap point since it was more accurate than the actual address of the apartment for some reason.

Right around the corner there was a small pasticceria where they served amazing cannoli and other pastries as well as espresso and, for those inclined, sandwiches. We’d go there most days, either on our way out or our way back from wherever was our plan for the day, and eventually I figured out the etiquette involved in paying. 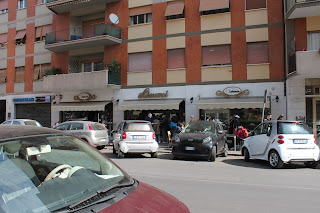 A block further was La Botticella a Testaccio which is the only restaurant we ended up going to twice, mostly because it was really good and really nearby. Oddly enough they remembered us, probably because we were the only people we ever noticed there who didn’t speak Italian. Nobody but us spoke English. We sort of stood out. And yet it worked, for the most part. There is a story there for another post. 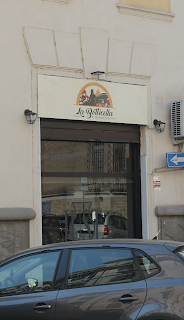 And if you went in the other direction there was a small park with a newsstand – an actual newsstand, with magazines and newspapers and everything – where you could buy bus tickets as well. Just to the right of that picture was a grocery store where we stocked up on snacks and breakfast food. It was a nice little neighborhood, and it was a good reminder that for all the tourism that Rome offers people do actually live there. They have normal lives that don’t involve catering to visitors. It’s a good thing to keep in mind when visiting a place. Perhaps the most interesting place in Testaccio was the Market, though. It was kind of a cross between a farmer’s market and a second-hand mall – if you’ve ever been to Reading Terminal Market in Philadelphia you’d recognize the place immediately, though Testaccio Market is a lot brighter – with some vendors having had stalls there for generations. I tended to stick to the food stalls, myself, but Kim was more adventurous. We stopped in toward the end of our stay and immediately wondered why it had taken us so long to get there, so we went back the next day for lunch. 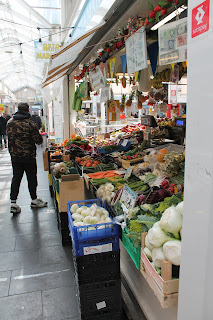 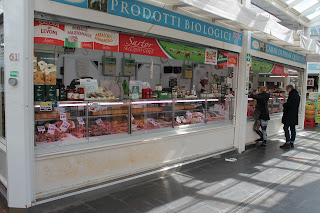 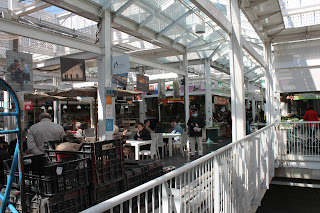 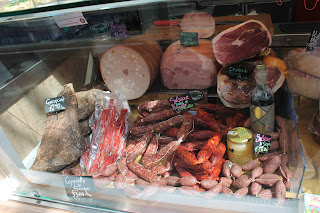 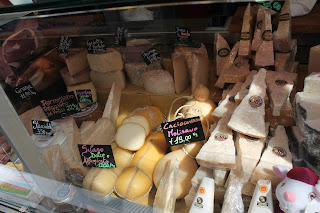 It was very good.

With our base of operations secure, we looked forward to exploring Rome. 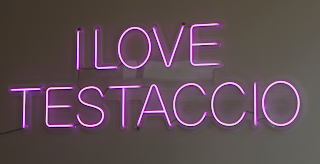