I spent most of last night playing Tetris in the minivan.

Not electronically, mind you. Not the kind of Tetris that you play on a screen, but rather the kind you play with boxes, bags, and various other oddly shaped possessions that all somehow have to fit into a defined space without falling out or getting crushed. It’s an art form, fitting it all together so that nothing gets left behind – or at least only those things you plan to leave behind get left behind, for there is always time for another trip – but such is my muse.

This morning Kim, Lauren, and I piled into the van, folding ourselves neatly around the stuff already there, and headed off to Main Campus University.

You have to hand it to universities these days – they’re much better organized about move-in than when I went to college back in the Cretaceous Period. There are volunteers to guide you to where you need to be, and signs everywhere you turn if you can’t find a volunteer. You can back up onto the sidewalk to unload easier – they actually put little ramps there so you can do this without ruining your suspension. There are roller bins to help you move stuff. And you even get a parking permit that allows you to move to one of the official university lots for the rest of the day if you are so inclined and your child actually wants you to stay.

Not much you can do about old dorms that don’t have elevators or air conditioning, though.

We arrived right as our scheduled window was starting and loaded up a couple of bins. These got us as far as the door to the dorm, and then we had to unload them and haul all that stuff up several flights of stairs, there being – as noted – no elevators. The first few trips are pretty straightforward, and then your body starts to notice what you’re doing and, if you’re me, it begins to remind you that you are Old and this is not how Old people normally spend their days.

But you persist, because it is your child’s first day at MCU and she needs to get moved in.

Fortunately it was a pleasant day, not the kind of oven we’ve had for the past few weeks. It was still stuffy in the room – putting together the futon that we brought for under her lofted bed left me rather soggy – but I can’t imagine trying to do that in 94F heat.

Well, actually I can. I’d just prefer not to.

We got it all up to her room and lofted the bed, placing the futon underneath as we had planned. And then it was time to go. MCU doesn’t have anything scheduled for parents the way Small Liberal Arts College did, and Lauren was eager to get on with her day and her college career.

She will be just fine. She’s been away before, and at least this time she doesn’t have to learn an entirely new language just to have ordinary conversations. She’s a good student and she’s been looking forward to this for a while now. So we said our goodbyes and she shooed us out.

Good luck to you, Lauren! Do well and be well. 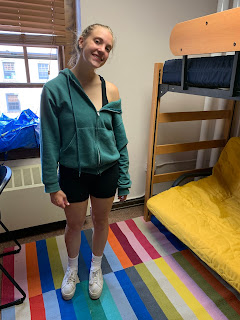 Don't forget the very important task of assembling the fan before we left! :)