The Return of the Fair

The Fair is back.

In what may be one of the last signs of normality for a while, as the Delta variant and the tidal wave of Unvaccinated Stupid in the US threatens to undo a year’s worth of progress in fighting the pandemic, the County Fair has returned after missing a year. We’ve been looking forward to this and as long as things are still generally okay we’re going to enjoy it while it lasts.

This is Lauren’s last year to be an exhibitor. 4H has an age limit, and once you’ve graduated high school you are mostly considered to have aged out. In theory you can come back for one more year but that’s pretty uncommon, so it’s nice to have a chance to go out with a Fair.

It’s a bit smaller this year than before, which is probably okay given the general tenor of the times. I suspect a lot of kids weren’t thrilled with the Zoom format of 4H meetings last year, and a lot of vendors weren’t sure if the Fair would happen at all or if they wanted to participate if it did – these decisions happen well in advance of the actual Fair, after all. The handmade lemonade stand isn’t there this year, for example, or the church tent that served the best breakfasts for the early morning kids tending their animals, or any of the radio stations. But there are a pile of exhibits from the 4H kids, almost the usual number of livestock, and the gyro salad place still rocks.

As usual, the Fair actually starts before the Fair starts. There are projects to be created and animals to be prepared, after all. Lauren entered in four categories this year – old favorites, so we already knew how to get things ready.

There was the photography project – a single photo of her friend Aleksia, which if I’m not mistaken was taken by the soft serve ice cream place (nobody else in town has that lighting). I thought it was a really nice photograph, though the judges gave it a pink ribbon for some reason. We read the comments on the card and they were all positive and therefore provided no enlightenment or even constructive criticism, so we’ll just chalk it up to the unpredictability of judges and move on. 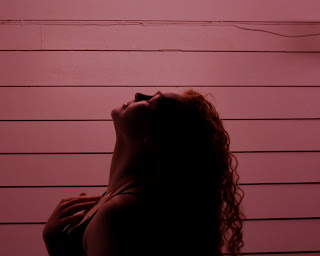 She did win a Top Blue for her houseplant project, though. It is adorable, after all. In a year where the County Fair didn’t overlap with the State Fair it might have gone on to the next level, but perhaps that’s for the best. 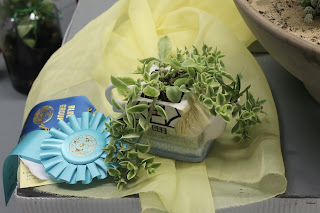 The big things are the animals, of course, and this year Lauren was showing in Rabbits and Poultry. For us that meant that the Fair started this past Saturday when Kim and I went to the Rabbit barn to help set up cages. It’s an art form setting those up without slicing your fingers to ribbons, one that I have mastered over the last decade, so I focused on that and let others take the set cages to where they needed to go.

And then it was time to bathe the chickens. 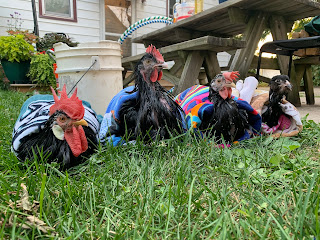 We do this every year, and every year we come to the same conclusion: there is nothing on this earth quite so ridiculous as a wet chicken. They’re not even “mad as a wet hen” really – they’re pretty calm about the whole thing. But absurd nonetheless. They stayed overnight in our garage because a chicken returned to the barn is a chicken that needs to be bathed again, and then we took them in the following morning.

Tuesday evening was Rabbit judging, and of course that was the hottest day of the week. But we all piled into the Stock Pavilion to see the various classes and breeds parade by. Lauren ended up on Table 2, with the fun judge (a man who managed to snag a rocketing rabbit out of midair at one point, to the great applause of the assembled crowd). Lauren always ends up in the very last category being judged so we were there for a while, but it was a good night. Miley got a white ribbon when all was said and done. 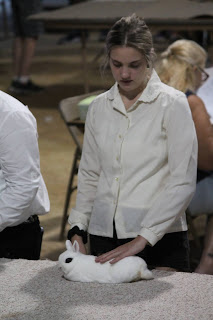 And the next morning it was Poultry judging time. 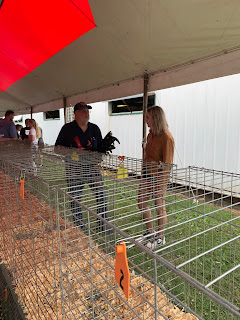 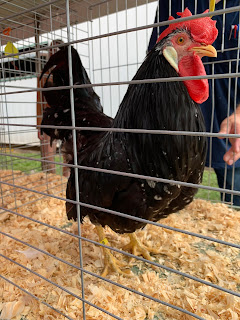 This is a much quicker process than Rabbit judging as entire classes (or multiple classes if they’re small enough) are brought out at once and the judges go through them at a clip. Lauren entered five chickens and ended up with three blues, a red, and a pink for one bird that apparently would have been a blue but had a single disqualifying feature.

And then it was done.

The Fair will continue until Sunday, and no doubt we will be there to wander around for a while. Last night the grandstand featured a polka band so Kim, Lauren, and Aleksia got the party started on the dance floor they set up for just that purpose. And after that there was a large group of teenagers on brass and a wide variety of other instruments as well as vocals and dancing – a statewide organization, apparently – that Kim and I stumbled into on our way out and ended up watching for an hour or so. They were really good. 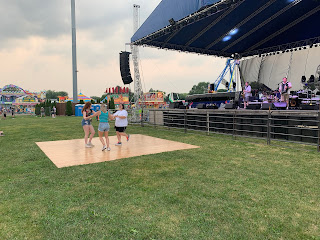 But as far as Things That Have To Get Done, we’re pretty much through. Next year we’ll go back as guests, with no exhibits to prepare. It will feel strange.

It’s been quite a ride, all these County Fairs, and it’s good to go out on a grace note.
Posted by David at 5:31 PM