Traveling in a Pandemic

I spent a week visiting my mom earlier this month. We had a lovely time.

It is a strange thing to travel in a pandemic. I’ve gotten my vaccinations and I’m careful about wearing my mask in public so I figured I’d be okay, but even so. I really haven’t gone anywhere far from home – certainly not overnight – since Christmas 2019.

It’s a brave new world out there.

I flew out of O’Hare, which meant getting on a bus for a couple of hours since there was no real point in having Kim drive all the way down there to drop me off. Everyone got their own pair of seats (unless they came with someone) and the driver made periodic announcements about keeping masks on, though he was probably the biggest gap in that wall.

We are a year into a pandemic and people still don’t know how to wear a mask. Honestly, it’s like they’re going out of their way to be stupid or something.

O’Hare is pretty much the same chaotic mess it’s always been. I had my boarding pass and wasn’t checking any bags so I just went straight to security and they marched me through. They make you lift your mask so they can check your ID photo, but otherwise it was pretty smooth. You still have to take off your shoes and get them X-rayed for some reason – one halfwit “Shoe Bomber” decades ago and we have Permanent Security Measures, but 149 mass shootings just in 2021 as of this posting and the idea of going to the root of the problem and addressing the criminally easy access to guns in this country is greeted with anguished rage by the ammosexuals who dominate our culture here in the United States.

Don’t even get me started on the whole “3 ounce” rule that provides so much security theater these days. On the flight back to Wisconsin from Philadelphia the TSA stole my pepper spread. “That’s too big,” the guy said. “It’s not a liquid and other guy wearing your uniform – the one standing not ten feet from you at this very moment if you want to check with him – said it would be fine,” I replied. “That’s too big,” he repeated. And so my flight was spared the ravages of a sealed jar of crushed cherry pepper spread. Their sense of relief was palpable, I’m sure.

But I got through the security at O’Hare, put myself back together, and headed off to find my gate. And was immediately confronted with this: 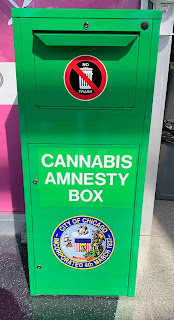 Marijuana is now legal in Illinois, but not in many of the places where people are going, so I suppose it just makes sense to have such things. Still a bit jarring for someone who lived through the “Just Say No” 1980s, though.

I got to the airport early, which always makes me feel more at ease (I’d much rather wait where I need to be than wait in traffic on the way there), so I had time to find lunch. They don’t feed you on planes anymore, because the last thing they need in a sealed tube with recycled air is 200 maskless people spreading disease. Of course that just moves the maskless people to the airport, but the ventilation is better and you can just walk away from the food court and find a quiet gate where you can eat your lunch. Half the restaurants are closed anyway, and there are no vending machines anymore, which I admit I didn’t understand – I’m not sure what makes them more dangerous than all the people in the food court, but there it is.

Both of my flights were full, which was a bit of a surprise to me. There wasn’t an empty seat on either plane, so there I was, shoulder to shoulder with strangers for two hours each way. I had a middle seat on the way out, in fact. The flight attendants were pretty good about enforcing the mask rule (which on airplanes carries the weight of federal law) and while there were a few people wearing chin straps they dutifully pulled them up when asked.

The bizarre part came at the end of each flight.

We’ve just spent two hours in a packed flight where “social distancing” means six inches between you and your neighbor. We land and taxi to the gate. And then they announce that they will be dismissing us by row, front to back, so as “to maintain social distancing and avoid crowding in the aisle.”

I think that ship has already sailed.

Although I suspect that this is a policy that they’ve been hoping to implement for years and the pandemic just gave them an excuse to do it. It certainly made getting off the plane easier and less hectic. Everyone on my flights complied pretty well except for the one big guy in the back of the plane who saw us as his personal missionary audience and tried to sell us his personal religion all the way up the aisle. I wasn’t too sad to see him skate off the plane early, to be honest.

Since I flew in I had to get a ride out to my mom’s apartment. Kim set up Lyft on my phone and it seemed to work both times. Both drivers had masks, though the return trip guy had one that kept slipping. They were both okay, though. I am old enough to remember being told not to get into cars driven by strangers and to be careful about meeting people on the internet, and here I am using the internet to get into cars driven by strangers and it’s not even the strangest thing I did that day. Things change.

I am safely back in Wisconsin now. I enjoyed the time spent with my mom, and perhaps at some point travel will be more normal than it is – a moving target, given the oddities that we have freighted down travel with over the last decade or two, but still.
Posted by David at 11:43 AM

Hi Mom! Here's hoping all remains well in your world.

Well, we are now officially Moderna Bros - Got my first jab yesterday ... 27 days until every adult in my household is fully vaccinated. (Yeah, I'm the last one. Scheduling becomes complex when you work 6 days a week ...)

Idiots shall be with us always: mesh facemasks are all the rage 'round here - "but I'm wearing a face-covering" is not working well, thankfully.

Moderna Bro! Any side effects? I have to say I didn't feel all that bad after either of the shots - not even the second one, which was a nice surprise. Sometimes you get lucky, I guess.

The mesh-mask thing is just assholes being assholes in a more assholic way than usual, I find. It pleased me no end to find out that one of the treasonous insurrectionists from January 6 may in fact be heading to jail over that very issue.

Nothing that would fall into the side-effect category. Feeling a little 'blah' today but nothing really unusual about that.

Saw that story from a different source this morning after I posted my comment. [giggles] Watched a Certifiable Class 1A Asshole trying to pass his mesh mask off as compliant get dragged out of the casino in handcuffs last night. On the 'Satisfying & Fulfilling Scale' that was a definitive 12 on a 10 point scale - easily worth losing a couple of hundred as an admission fee ...

Glad to hear that the shot didn't lay you low. I was a bit worried when I went for mine, but I figured "worth it" and did it anyway.

Watching assholes get what they deserve is one of the great pleasures of life, really.

I'm not sure if this makes me a good person or not, and at this point I no longer care.

Either it places us on the side of good, or we're both goin' to hell.

Most likely the former, but I'm okay with the latter as well. A bit tired of bein' cold this year, anywho.

UPDATE: Okay, so about an hour after that last post I got hit with a remarkable level of nausea. N x 10 to the nth power nausea.* This was accompanied by an overwhelming desire to sleep. So I did. For about four hours. Then I got up and went to work.

Another day out there in the truck on the leading edge.

* To be quite honest, that may be a (minor) exaggeration. Also, don't know if it was the vaccine or the leftover Little Ceasar's Pissa. My wife is betting on the latter.

Could be both, after all.

I hope you're feeling better after all that!

Actually, at my age ( or yours, as far as that goes), "better" becomes a relative term - as in, better relative to what, precisely?

'Better than yesterday?' Maybe - Still too early in the day to commit, though.

'Better than when I was 28? Definitely. Not. Definitively Not.

(I will stop, now. This could end up going to a very depressing place.)

It also works going forward, though. I'm doing much better today than I will be on June 5, 2143, for example. Win!

One thing is certain:

I absolutely love your sense of irony.

David for the WIN!