1. I now have children who are responsible enough to make and keep dental appointments all on their own and as a parent I would like to think that this has something to do with how we raised them but I know it’s just that they’re good people.

2. The world is on fire so you might as well eat all the potato chips and be done with it.

3. We now have a new dishwasher, because why not – all of the appliances in the house seem to be succumbing to the general tenor of 2020 and I understand this, truly I do.  The microwave has a new door handle, the fridge has a new water line, and we’re on our third tea kettle since quarantine back in March and I feel this general need to break down and be replaced in my bones, really I do.  Maybe the appliances are simply being worn out because we’re home more and using them more.  And maybe in this case it’s just because the dishwasher was 20 years old almost to the day and didn’t owe us a dime.  It actually still worked pretty well, once you got it to work, but the electronic control panel finally died and they stopped making replacement parts back when we had an actual president instead of the criminal conspiracy that occupies the Oval Office these days.  So we did some research and picked a model, and then called our usual appliance guy about installing it and were told that he refuses to work on that brand and we should either get a different appliance guy or get a different brand, so we researched that and decided that the brand he recommended was okay and got one.  It works fine and is a whole lot quieter, though it has piercing bright lights that make the kitchen look like an airport.

4. When they took the old one out we found this underneath: 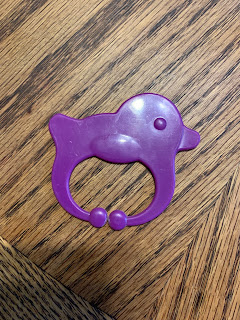 It’s a reminder that we got the dishwasher in the first place because we discovered that there is a world of difference between how many dishes a couple creates and how many dishes new parents create.  Memories.

5. I’m now on my second book of crossword puzzles since the plague hit.  This is a hobby that runs on both sides of my family and got passed down to me.  I had a pile of puzzle-a-day calendars that basically got me through graduate school, for example, but for a long time now I have had to put them aside for lack of time.  And then I was quarantined and picked up the book of “Wait, Wait!  Don’t Tell Me!” crosswords that Kim had gotten for me as a gift a while ago.  They weren’t hard to figure out even if you did have to work around the show-specific clues (who remembers individual episodes of an NPR quiz show?  Probably not even the guests).  Occasionally Oliver or Lauren would solve one as well, which was nice in a passing down the hobby sort of way.  I bought a new book of puzzles when I finished – just difficult enough to be interesting but not so difficult that I couldn’t finish one in the time it took me to eat lunch, so no Sunday NYT puzzles this time – and I’m slowly working my way through it.

6. It amazes me how many crossword puzzles assume a working knowledge of 1970s American pop culture, though.  Seriously.  The world has moved on.

7. We painted the front of the garage this week.  Like any household project in which I play a part, it’s more or less correct if you don’t look too closely at it.  The wood is protected again, and the joy of white paint is that you don’t notice all the things that would give a professional a heart attack unless you get right up on it.

8.  At what point does it become legal to feed the neighborhood barking dogs to the nearest large predator?  Asking for a friend.

9. I keep thinking that I should have more time, now that the Atomic Bomb class is over, but this does not seem to be the case.

10. If I have learned anything during this plague- and Fascism-filled year it is that I will never be an alcoholic, which is a good thing to know even if there are times where simply being alive and aware of current events is enough to make a body wish they were more generally intoxicated than they were.
Posted by David at 9:55 PM

You just knew I was lurking out there somewhere, didn't cha?

1. Punctuation correction. Period required after the word “responsible”. A simple statement that roughly 50% of parents can never make. Remainder of paragraph interesting, but may be superfluous. Oh, and congratulations.

2. Yeah. It is. And I’m living in the chimney. And have to be content with stale pretzels!

4. I may have recently been standing a wee bit to close to my wife’s medicine, but I swear that purple thing is floating a few inches of the floor with no visible means of support, and it’s kinda freaking me out.

8. It’s not the dogs fault; the question should be rephrased thusly:
“At what point does it become legal to feed the neighborhood barking dog’s owner to the nearest large computer controlled trash compactor? (Why make some poor, undeserving, innocent predator suffer?)

9. Everybody gets 24 hours in which to complete 30 hours worth of tasks. No exceptions! No idea why you feel you should be issued more than the standard allotment. Even if you can teach people how to build Atomic Boobs.

10. The following has been distilled down from a six-page dissertation about alcoholism*: 😳

Never is a very long time - a period of time so vast that one cannot predict a specific outcome. Perhaps as long as a few days …

And, yes, this is one of those times that I most certainly do wish that I were more generally intoxicated than I am.**

* Which after reading through it to proofread, I decided would be kind of assholish to post here - even for me!
** Well, no - not really. Wouldn’t want to spoil the run: Clean and sober for 19 years, 7 months, 19 days. (Give me a little bit and I can take that down to hours, minutes and seconds. Stopped tracking it that close about six years back.) 😀

And that was supposed to "Bombs". However, Boobs kinda works, too.

1. Thanks! They're good kids, although really they're good adults now. Time flies.

4. The purple thing is a teething ring. It's actually resting on the dining room table. The shadow in the corner is me interfering with the overhead light. That said, it kind of freaks me out even knowing all that.

8. It may not be the dogs' fault but it is the dogs making the noise. I'm happy to rephrase according to your specs but the dogs have to go elsewhere too. Far from me is all I ask. After that they can do what they want.

9. Because I'm greedy, I suppose. Also, I wonder what Atomic Boobs would entail. I suspect that somewhere in the 1950s someone made a stag film with that very theme - the ways in which the atomic bomb has permeated American culture are staggeringly vast and weird - and I wonder if I could research that without becoming a bigger blip in the FBI's database than I already am.

10. Congratulations on your streak!

Given that I find alcohol unpleasant after more than one drink every couple of weeks, I'm pretty sure (though one can never be absolutely sure, of course) that my future does not include alcoholism. I like my dram of scotch, for example, but it took me fifteen months to finish the last bottle I had and that included quarantine time. I can manage two glasses of wine before that reaction sets in, which is nice to accompany large meals. But that's pretty much my limit. I have other problems.

One of which is being too aware of the news and the general state of the world which was of course the point of the joke, as you already know.

Alcoholism is a serious disease and I'm always impressed by people who have beaten it (in the ongoing one-day-at-a-time way that one does with addictions).