1. We had a lovely Father’s Day here this past weekend.  It was quiet, as they tend to be anyway even without the added incentive of a pandemic to keep us home.  Both Kim and I are swamped this summer with classes, grading, and other assorted tasks (a nice problem to have in the current economy) and Lauren and Oliver are busy with other things as young adults tend to be, so mostly the four of us just had a very nice dinner and then played cards together.  There were cards and some small presents, which I always appreciate, but really I got what I wanted when we sat down together at the table.  There is nothing more precious in this world than time with my family, and I will savor every moment of it. 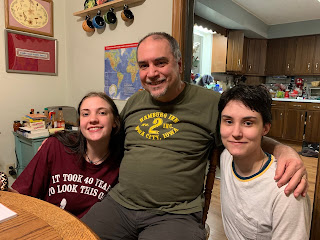 2. The atomic bomb class is back this summer, though for the first time in the 22 years we’ve been teaching it we’ve had to take it online.  It’s been an experience.  We’re doing the class by Zoom, since it’s much easier to do breakout rooms on that platform than on Webex (the platform that Home Campus uses) and to be honest I’m not really worried about the security or encryption of the class.  What’s the worst that could happen?  Someone gets educated?

3. I spent all last week grading AP exams.  I was supposed to do that in Florida a couple of weeks ago, but instead I was at home, working around all of my various classes.  I can’t say I’m unhappy about keeping my “never set foot in Florida” streak alive, especially now when that state has become one of the world’s leading exporters of Stupid here in the pandemic, but it is hard to focus on that kind of bulk grading at home.  On the plus side, my roommate from last year’s AP (and this year’s had we gone to Florida) came by this weekend as he was in the area and we had a nice socially-distant visit in the back yard for a while.  So win for us.

4. I’m mostly staying in these days, as I’ve done since March, because let’s just be honest here: the United States has utterly failed in its attempt to deal with the coronavirus.  This failure starts at the top, with the catastrophically idiotic and gratuitously cruel response by der Sturmtrumper and his enablers, continues on down through every halfwit politician and Angry Armed White Boy complaining how masks and lockdown infringe on their right to infect other people, and ends with every maskless wonder at the beach or their church service waiting for the coroner to fit them for next month’s autopsy slab.  No wonder the EU has pretty much banned all travel from the US.  I’d ban us too.  We are the laughing stock of the world right now, and I don't blame the world for that at all. 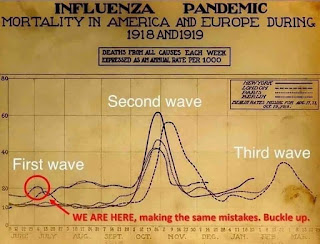 6. Naturally this is the time when our appliances have chosen to be problematic.  The refrigerator is leaking water tonight – not a whole lot, just enough to warrant a call to the Appliance Guy, who knows us well by now.  He’ll be by tomorrow.  And while he’s here perhaps I’ll ask him about the dishwasher, which randomly seems to decide that it needs to go into Delay mode – sometimes while it’s washing things and sometimes not.  The fridge is annoying since it’s not that old, but the dishwasher is Ollie’s age and it really doesn’t owe us anything at this point.

7. Just a reminder that there are still protests going on, that Black Lives Still Matter even if the right-wing extremists aren’t trying to frame the protesters for rioting as much anymore so it's not on the news every night, and that it’s long since past time that this country started treating its citizens as citizens and its non-citizens as human beings.  Not sure what this says about the US that this needs to be repeated, but there you go.

8. Also, for those people out there who get hot and bothered by the fact that all those Confederate statues are coming down, get over it.  Those statues should never have been put up in the first place and it is an unmitigated good that they’re being torn down and replaced by, well, anything.  Or nothing.  They should be melted down and made into something useful like ball bearings for roller skates.

We should not have statues of traitors or enemies.  The Confederacy was a pretender nation founded on treason and dedicated to the preservation of human slavery.  It declared war on the United States of America, killed hundreds of thousands of Americans, and was destroyed just as it deserved to be.  The United States in particular and humanity in general were only improved by the annihilation of the Confederacy.

9. I spent an hour today trying to have a 15-minute doctor appointment by video, oh brave new world.  It was nice to see the doctor and even nicer not to have some of the experiences that men of my age bracket invariably have at in-person check-ups, but I’m not convinced that healthcare by videochat is the best way to do this.

10. It’s hard to write about small things when the world is on fire, but sometimes you need a reminder that not everything has to be significant and that many of the things that make life worthwhile are not the things that are going to end up in someone’s history textbook.  They’re important to me, and that’s what matters here.
Posted by David at 9:42 PM

I caught a random twitter thread from someone who found the original drafts of the 13th amendment in the congressional archives, and thought of you. Holy cow that was a scary glimpse into an alternate timeline.

Your atomic bomb class has always fascinated me. Maybe next summer I'll officially audit or something. This summer I am (officially! albeit just auditing, so $150 rather than $3k) taking Food Science & Engineering from a prof friend at Bucknell, and although it is delightful and fascinating it has done nothing to make me *less* behind on the stuff for which I am supposedly gainfully employed :(.

It is a fun class! I don't know when or if we will offer it again (it's not one we get to do very often) but when it happens I'll let you know. I'll have to look into that Food Science class since that is a subject that Kim has been working on as well - she put together a food chemistry class that we introduced last year and it was pretty popular.

https://www.youtube.com/channel/UC5YtXwGJZKnEkJU21ZfIajQ takes you to some of the supporting materials.

Late to the party again. [sigh]

1. As always, That is a Fine Looking Family you have there.

Methinks someone is missing? Mayhap on the other side of the photographic mechanism?

2. Still gonna pass on all the bomb jokes that leap to mind.

4. Anyone with an IQ higher than the average dandelion is hanging out in the best safe haven they can find. When out and about, even I have made an honest attempt at wearing a mask. Last Saturday I was all the way up to 3 minutes before freaking out. Gonna try for four this weekend.

5. Starting to feel more like a crash test dummy every day. (They don’t get to choose their fate …)

So, I start by (calmly) asking if his black labs matter more than my grandkids. As you might well imagine, the conversation went sideways rather quickly for about fifteen minutes or so. Ultimately, he came to understand why co-opting Black Lives Matter in that way was bad. He actually got another T-shirt out of his car and threw the offensive T-shirt on the campfire.

That went sideways, too, but for entirely different reasons.

Conclusion: They can, at times, choose to listen to reasoned voices. There may be hope. Despite the length of the actual definition, ‘May’ is a very ill-defined word.

8. Saw a meme the other day - wish I could figure out a way to post it here. Picture of Civil War Battlefield, White Flag standing in the wind. Caption: “The only confederate flag that mattered.”

10. A rather significant percentage of what is important to you is also important to us. And the world. Keep it coming!

1. Thanks! It's the center of my world. And yes, Kim was on the other side of the camera. There aren't many photos of me with my kids, so I was glad she took this one.

4. Keep up the good work! I am astonished at how many people are too stupid to figure out that the masks are essential.

7. Well, that's a nice thing to hear. I'm glad that he listened to you. It's good to have hopeful stories.

8. Yes, yes indeed. They lost, they deserved to lose, and everyone is better off because they lost.