A Journal of the Plague Year, Part the Twenty-Sixth - Notes from Lockdown

1. It’s May 10 here in Baja Canada and it snowed.  Not much, granted, but seriously – it should not snow at all in May.  That’s just rude.

2. This is especially so given that Kim and I just finished putting in a raised bed garden in the front of the house, now that we’re allowed to put them there, and Kim has a pallet of small green plants in medium-sized green cups waiting to be transferred to the big green world outside.  They’ll just have to keep waiting, I suppose.

3. We are making progress on Lauren’s basement-cleaning project.  Not as much progress as she would like us to be making, but enough to be noticeable.  Part of the problem, of course, is that while some of what is leaving the basement is heading straight for the landfill or the recycling center, much of it is perfectly serviceable if no longer anything we can use and there is nowhere that is taking donations these days.  We’re not just going to throw it away.  Add all that together and it means that mostly what we are doing is decluttering the basement while encluttering the garage.  Eventually we will reach equilibrium.

4. One does make exciting discoveries, however.  Lauren and Kim discovered Kim’s wedding dress and it mostly fits Lauren these days. 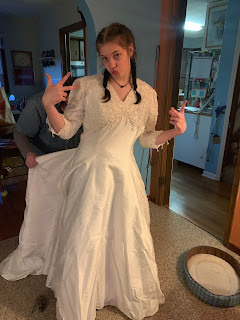 5. The semester is winding down now, and not a moment too soon.  Online classes take a lot more out of you than regular classes – especially if your classes weren’t really designed to be online in the first place and you had to do some hurried retconning to get them where they needed to be.  I’m looking forward to a week or so without so many Zoom meetings before the next round starts up again.

6. All those whingers threatening to sue their universities because they had to go to online classes instead of dying from coronavirus caught in a lecture hall are cordially invited to take their horse and find some other form of entertainment.

7. Happy Mother’s Day, for those who have, are, have ever had or been, or may one day have or be mothers!  We had a lovely time yesterday when it was about 30F warmer than it is today – we headed up to one of the state parks that is now open and took a walk around for a bit.  It’s a nice socially distant way to get out of the house.  We saw a bald eagle fly by and a handful of pelicans, we scored a tray of buckeye brownies from a small shop that was open (“Mask up, folks!  We’re going in!”) and we had a nice day.  Today we’ve managed to do one Zoom call with my side of the family and are working on another with Kim’s side of the family and it is nice to see whomever can make it.  And for those who can’t make it, we’ll try again another time.

8. We’re actually extending the holiday out a bit, as we tend to do.  We have a “Movable Feast” tradition wherein holidays happen whenever you have time for them.  Oliver has been swamped by the last week of his class and was unable to join us yesterday, so we’ll keep the holiday going for another week and by then perhaps the thing I ordered for Kim will have arrived.  Never a bad time for a holiday, really.

9. Having completed the entire Hitchhiker’s Guide to the Galaxy project, I have now moved on to rereading all of Christopher Moore’s books.  In order, because that’s the kind of nerd I am.  If you haven’t had the pleasure, you should find one of his books and get on that.  We need funny these days.

10. Watching the current president and his administration try to deal with this pandemic and its consequences has been very much like watching a pigeon trying to play chess.  Neither has any idea what it is doing, and when pressed they both kick pieces over randomly, shit everywhere, and then act like they’ve won.  I wonder what it would be like to have responsible adults in charge of the country again.
Posted by David at 7:38 PM