We bought our house back in the 1990s, when times were simpler, American politics hadn’t quite yet become a Darwinian race toward Fascism, and people still thought we’d won the Cold War.  Kim was working toward tenure.  I was still in graduate school.  Our children were just gleams in our eyes.

Kim had moved to Our Little Town a couple of years before I did, for her job at Home Campus.  Shortly before we got married I moved up from Iowa where I was in graduate school, since one of us had to move and she had the job.  It was a fairly spacious apartment – housing was relatively inexpensive in Our Little Town back then – but it quickly became apparent that if we wanted to have a family at some point we should think about buying a house.

House hunting is one of those activities that are designed to convince you that you – yes, you, personally – are the only human being on the planet with any taste whatsoever.  Other people will think that of me when they come to look at my house, I have no doubt.  At least those parts of the house that I had any say in decorating, anyway.  It’s kind of like driving that way, since every driver on the road who is not you is either a maniac or an idiot.  We looked at a lot of houses that summer, most of which we crossed off our list fairly quickly.  Some we didn’t even get all the way through.

It eventually came down to two.  One was smaller and on a busier road but had a larger yard and there wasn’t any competition for it.  The other was the only one that had felt like home to me, but it had another bidder.  Eventually the guy who owned it – a single man who was being moved out of state by his job – decided he liked us better and let us have it for only slightly more than we’d bid.  We were glad to take it.

It took me going to the Title Insurance office at 4:58pm on a Friday and doing my best Philadelphia Glower at them until they added up two columns of numbers to get a total I could take to the bank (which was open until 6pm) to get a cashier’s check for settlement costs that we could present at 7:30am the following Monday, but eventually we had that check – with more zeroes on a check than I had ever seen up to that point in my life – and once we finished settlement we had the house.

We had pizza delivered to our new address that night, because we could. 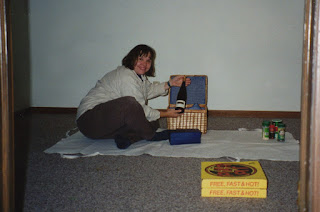 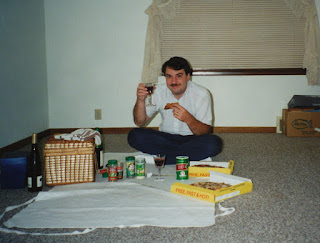 We kept the apartment for another month and slowly moved things out, one carload at a time.  I would go over to the house sometimes and work there – it was quiet and I was putting together my first history class of my own and I could spread out and stay up until truly ungodly hours without disturbing Kim.  Eventually we got a few friends together and rented a truck for the big stuff – it was all of a three-block move, but nobody wants to be hauling a sofa by hand that far – and by the end of the month we had finally gotten all of our stuff out of the apartment.

By that point we’d made our first mortgage payment.

Because you don’t really own your house when you first buy it, not usually.  You own about 10% of it, and the rest belongs to a bank.  Interest rates were fairly high at the time, and we ended up with a mortgage that came with an 8.5% variable rate which we locked in at the first opportunity.

Not long after Oliver was born interest rates crashed and we traded that one in for a 3% rate that left us with the same payment and enough cash left over to replace the roof.  This turned out to be a good thing, since it meant we no longer shared the attic kneewall spaces with any vagrant squirrel that happened by.  Those rodents do not pay rent on time, let me tell you.

At some point – probably after I finished grad school and started actually being productive – we had enough money to pay a bit extra on the mortgage every month.  If you do that you can pay it off a lot faster, it turns out.

We made our last payment in December.  The “Release from Lien” document arrived in the mail a few days ago.  The place is ours.

It’s strange not having to write that check anymore, though it is a strangeness I can live with.  With Oliver in college and Lauren following along shortly we already know where the money will go.  But still.  It is nice to have that debt paid.

We're about five years behind you - finally paying more on principal than interest.

Thanks! And good luck to you as you get closer! It's a nice milestone to hit, I say.