Our Trip to Europe: We Get Puzzled

One of the things that you should do when you’re on vacation is do things you’ve already done if you enjoyed them.  There’s no need to find brand new things for every waking moment, really.  It’s supposed to be fun.

This is how we ended up back in Polzeath on the last Friday of our trip.  It’s a lovely place and we’d enjoyed it the first time, so it seemed a good place to return to.  Magnus chose to sleep in that morning, but the rest of us piled back into the cars and headed on over.

Lauren and Ginny returned to their surfboards. 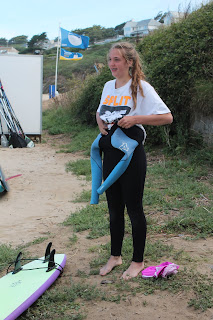 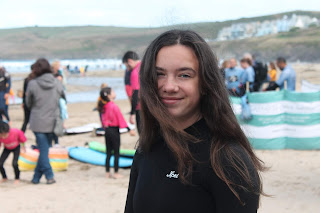 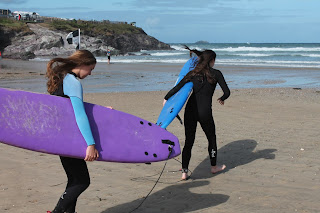 Tabitha spent some time out on the beach with us, but eventually returned to the little cafe where the food and the wifi were.  That was pretty much the only place in Cornwall where we found wifi, so we made it a point to go there.  It’s not a bad lure, really.  That is one smart cafe. 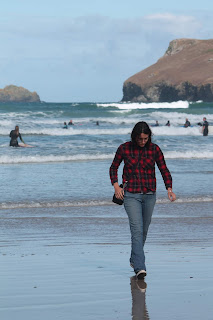 Kim, Richard, and I stayed out on the beach a bit longer to watch Lauren and Ginny surf.  They looked like they were having a pretty good time. 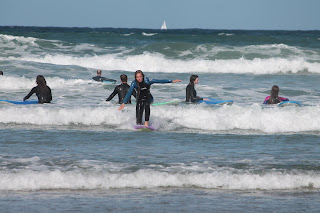 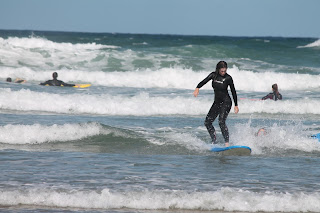 Eventually Kim and I decided that they were fine on their own and we took a walk around downtown Polzeath.  This did not take long, as Polzeath is a fairly small place, but it’s a nice place to walk without any particular destination.  There were a few gift shops that looked interesting, and an art gallery up on the hill that featured much in the way of ocean-themed painting and drawing.  We also walked by a small wood-fired pizza shop, where we discovered that in Polzeath a “Chicago” pizza looks just like a regular pizza only it has double pepperoni.  We thought about letting them know that a real Chicago pizza looks more or less like a casserole, but that just seemed pointlessly rude and besides, double pepperoni is a good thing.  It smelled good walking by, too.

We also passed this sign, which was my favorite one in Polzeath, even more than the yellow van emblazoned with “Keep Calm and Kill Zombies.” 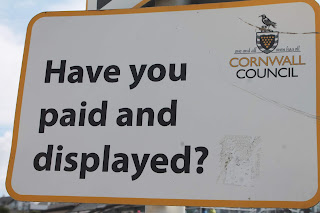 Brother, you don’t know the half of it.

By the time we got back to the little cafe the surfing had come to an end – even with a wetsuit that water is pretty cold – so we hung out there for a while.  There was pizza (not the Chicago variety, admittedly, either of them, but tasty enough) and drinks and Kim went out and brought back pasties and it was a fine lunch, it was.

Ginny and I also hit the little grocery store one more time, because groceries.  I love those places.  I’m sure this is just one more sign that I am out of kilter by several degrees, but so it goes.

Eventually we made our way back to the cottage where we all ended up watching The Great British Baking Show while we were actually in Britain.

If you’ve never seen this show, well, you should.  It’s a cooking contest show, where various contestants are given tasks to complete and are judged by a panel of people I feel I might recognize if I were actually British, so in that regard it’s like all the others of its genre.  Except that it’s kind of congenial and sweet, and you end up rooting for all of them in an odd sort of way.  Also, I’ve read that when contestants get overwhelmed and break down in tears on the show the hosts will go over and stand by them and swear so the footage can’t be aired, and I think that’s marvelous.

This was also when Kim and I decided to go visit the Bee Place.

Our friend Lois was watching our chickens for us while we were away, and she also keeps bees.  On the way back and forth to Polzeath we’d noticed a little shop that sold beekeeping supplies and we thought that would be a great place to find a thank you gift for her, so we drove on down.  And it was a nice place – the sort of place that has kittens in the yard and will sell you a dozen eggs from their own chickens for a pound and sponsors beekeeping workshops for the local community and was full to the brim with bee-related things.  It really is its own subculture, beekeeping.

Our big excursion that day, however, was to go to the Puzzle Room – an escape room near Mount Hawke, which is itself way down toward the end of Cornwall.  It was about an hour’s drive, but then the roads were small so in miles it probably wasn’t that far at all.  There were more than a few roundabouts, because this is the UK after all, and a fair amount of holiday traffic but we managed to get there together so good for us.

For those of you who live under rocks and have not run into the escape room phenomenon, they’re a lot of fun.  You get locked into a room full of puzzles for you to solve – usually there’s an overarching story that requires you to work out a code here and then apply it there to get a key that you have to use to open something this other place, and eventually you work your way up to the last puzzle and unlock the door.  We’ve done these a couple of times, and enjoyed them immensely.  You usually get an hour before they come and unlock the place for you and send you on your way, so you have to work fast.  It’s a test of your communication and compatibility, so be sure to go with people you like.  Just saying.

We’d thought to do it as one big group, but Jason – the guy who runs the Puzzle Room, and a friendlier host you could not ask for – said he didn’t have any other party booked that afternoon so if we wanted to split up into two groups (say, parents vs. teenagers?) we could do that, and how could we say no to that?

The Puzzle room sits next to a local indoor skateboard park, so while they were solving all the puzzles Kim, Richard, and I found our way to the snack bar and hung out a bit.  At one point some piece of machinery in the kitchen died a flaming death, which added a bit of excitement to the wait, but no real harm done to anything other than the machine.

When it was our turn, Jason patiently explained what we had to do.  It was a nautical-themed mystery, and the “International Codgers” set about decoding the various codes and unlocking the various locks, and when it was over Jason gathered us all together.

“How fast did you think you solved it?” he asked, pointing out that the record time for that room was 48:39, held by a pair of guys named Jeff and Kev who apparently hold the record times for most of the escape rooms in Cornwall (about 15 of the 20, Jason thought).  He did tell us that both groups came in under the hour mark, so we felt good about that.

It turns out that the International Codgers emerged at 54:39, which was not a bad time at all.

The Transatlantic Teenagers, however, blew by the record with a time of 46:17, so go them.  We wrote our times up on the wall to celebrate. 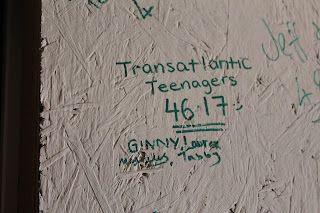 Naturally there had to be pictures after this achievement. 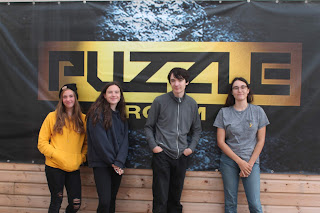 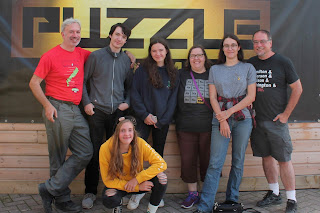 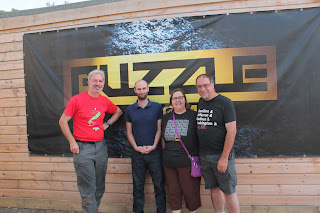 By this point we were pretty hungry, so we went over to Mount Hawke proper and found a place called the Old School Restaurant, located – oddly enough – inside of an old school.  We were warned that there would be delays, but either we didn’t notice them or they weren’t that bad.  We’re on vacation – how much of a hurry are we in?  Plus it turned out that both our waitress and the chef had nut allergies, so they were very sympathetic toward our concerns.  We had a lovely meal. 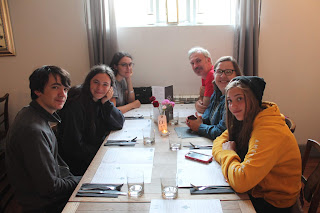 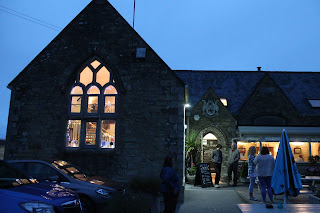 It was another hour back to the cottage, where we spent the rest of the evening playing Tabitha’s paper telephone game, which is one of those games that get harder to play after a while because you find yourself laughing so hard – sometimes with each other as you’re reading the answers, and sometimes just to yourself as you’re writing stuff down and thinking, “Well, here goes nothing.”  That’s a good kind of game, really.
Posted by David at 11:07 PM

Just so you know, there's a puzzle room here in Media, in town somewhere, a few minutes away from my apartment. You guys should try it out the next time you're here.