Makes Cents to Me

I got two wheat cents in change today, each from a separate transaction. 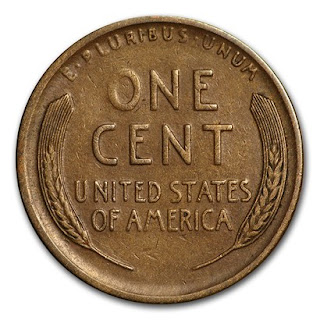 You don’t see many of them anymore.  They haven’t made them since 1958, and every year that goes by more and more of them get pulled out of circulation by people like me.  Eventually they will all be sitting in collections somewhere.

I’ve actually been on kind of a run with wheat cents of late.  I think I’ve averaged about one a week since March, which is pretty rich for this sort of thing.  Sometimes you go months without seeing one, and I’m the sort of person who actually checks.  I found two in New Orleans – one just sitting on the sidewalk as I walked by, in fact.  And since then they’ve just appeared in my change on a semiregular basis.

They’re not really worth a whole lot, I suppose.  Not most of them.  The two I found today might combine to be worth four bits to a serious collector.  They’re in good shape – surprisingly so, for bits of metal that old – but neither rare nor in high demand.

My dad taught me to collect coins, back when I was a kid.  He had a raft of old wheat cents in a blue plastic tray in his dresser – many of them steel, which they minted for one year during WWII when copper got scarce – and a bunch of other stuff next to the tray, carefully tossed into an old Crown Royal bag.  He and his buddies had a “couple of guys and a truck” business in high school where they would move people from one house to another, and those houses were old.  His position was that anything he found in the floorboards was his.  Lots of old copper, some silver.  No gold.  People kept track of their gold.

He taught me which coins to look for and save, and which ones to let go by.  And gradually we built up the collection.  You could still find silver coins in circulation then – I remember being handed three silver quarters in change at a street fair next to my old elementary school, maybe ten years after the government switched to the copper/nickel coins we have today, for example.  Copper ones nobody paid attention to, so those were even easier to find.

One summer we tried to organize it all, and we got a fair bit of it into paper sleeves or plastic tubes before petering out on the project.  Tabitha and I keep talking about trying to finish that project, and perhaps this summer we will.

There aren’t many people around these days to share the triumphant news of wheat cents anymore.

This post makes me smile. I used to collect old coins as a child. Wheat pennies, buffalo nickels, etc.

I recently received a Mercury head dime in change from a chain store. The cashier was confused by my delight.

I like to think about where the coins have been and for what purpose they were used.

Glad I could make you smile! And I get that look from cashiers a lot, really. It's better than the "why is this guy checking his change so carefully?" grimace of suspicion, though.

I like to think about their history as well. It makes them come alive a bit in my mind, and then they have stories to tell. Everything is better with stories.

I have been an avid collector of coins since I first got hooked in the Air Force some (damn, I don't even want to type that number!) years ago. That was when I first learned all about the value of coins. Not just their value from a historical perspective, but that they actually gain value with age (and rarity, condition, and all that jazz). My collection currently encompasses more than 1100 coins with a value in excess of $200 each*.

However, way too late to save me from me:

When I was 12 years old, my grandfather gave me one of these:

(From the Carson City Mint, no less!) Value even at that time [1965] was several hundreds of dollars.

LIFE LESSON: If you give collectible coins to youngsters, you should at least have your head examined, if not actually be confined in a padded room. Telling a 12 year old kid that such a coin is "valuable" and expecting that to mean something does not work.

And, just to top it off, I lost the game of miniature golf ...

*No. I do not store them at home. I have also learned, after many trials & tribulations, the value of a safe deposit box.

Oh, that hurts! Those Morgan dollars were gorgeous in addition to being valuable.

But not surprising that it ended up that way, as you said. I spent a summer working at a 7/11 - your basic college-kid convenience store kind of job. I loved it, actually. And it was a coin-collector's dream. My boss didn't care as long as he got face value for everything - he even started saving things for me, by the end of the summer - so I'd walk in with a pocket full of change and walk out with a different pocket full of change. I was continually amazed at what people would hand me. I got coins as old as 1909. I got a coin from Vichy France and another from New Zealand. I got silver. I got wheat cents galore. It was a great summer. But a lot of those things came from kids like you were when you were 12. Not all - some came from adults who simply didn't care.

The night guy was more scrupulous than I was, to be honest. One lady tried to hand him a Peace Dollar from the 1920s. "Lady," he told her, "you don't want to hand this to me. Take it to a coin dealer." I would have taken it, absolutely I would have.

Most of the coins my dad and I had weren't all that valuable. Some were, and that - as you say - is why there are safe deposit boxes.

I have to agree, the coins people toss away simply amaze.

I did two years accumulated time behind the counter at a few different inconvenience stores back in the late 70s and early 80s just prior to sobering up enough to actually hold down a real job. I added 106 coins of value to my collection during that run, 11 of which remain in my collection. Six coins were duplicates, so I sold the worse of each pair (mostly MS60 or MS62) for $6,480 net at auction in 1984. Today, those coins would be worth more than $36,000.

The remaining 89 lesser value coins brought not quite $1,050 net; some at auction, but most were sold to coin dealers.

(Ohhh, that was just plain cruel, wasn't it? Shame on me!)

You were clearly a more serious collector than I ever was. Those sound like really cool coins!

Other than a couple, there probably wasn't a coin in the collection that could buy you a nice dinner - most could barely buy you a candy bar. But my dad always said that he'd rather have the coins than the money for them, because they were interesting.

We did luck into one that was valuable - that's the main one in the bank box now. :)