I am already a winner.

I don’t usually enter drawings unless there is more to it than the prize at the end, as my track record in lotteries is pretty dismal.  I won a wooden pen once when I lived in Pittsburgh, and at my high school graduation after-party (the one that the school district threw for us to keep us out of trouble) I won a gallon of some hideous cologne whose name translated more or less as “Jungle Juice,” so whether that counts as a win is kind of an open question really.  Last month I won a travel mug at a trivia contest I was in (my team came in second, since the last round was deeply local trivia and nobody on the team grew up here in Our Little Town).  Otherwise my record is pretty clean.  Many entries.  Few wins.

But Patrick Rothfuss has been running his Worldbuilders event for a few years now and I’ve usually thrown in my contribution, because it’s more than just the prizes.

Rothfuss is a writer, the author of The Kingkiller Chronicles – currently two big novels (and waiting for the third), at least one novella, a couple of short stories, and if I remember correctly a television series in the works in the near future) – as well as a couple of picture books that are, as the stickers on the front clearly state, not meant for children.  I got hooked on the first Kingkiller book – The Name of the Wind.  It was one of the most darkly lyrical things I have ever read.  He’s also a lot of fun in person, and those of us in Wisconsin get to see him fairly often if we can be pried out of our homes since he lives here and is often doing readings or other events.  Kim and I went to see him in Madison once, and we had a lovely time.

Worldbuilders is a charity lottery designed to benefit Heiffer International, an organization that provides farm animals to poor people in rural areas of the developing world on the theory that those animals provide food, wool, and capital that can be used more effectively to lift people out of poverty than simply donations.  There’s a schedule of donations on the website – so much donated yields this many animals of that type – and for every $10 you donate you get a ticket for the lottery.

There are fabulous prizes, most of which are lottery prizes but some are auctioned straight off.

Remember what I said about Rothfuss being a writer?  It turns out that writers tend to know each other.  And their publishers.  So the first year that Rothfuss decided to run this event, he reached out to his friends and their publishers looking for donations for prizes.

He was swamped.  Books – many of them signed – poured in.  Games.  Favors, such as an editing session with a real published author.  And so on.  It was a hit.

Now it’s a huge hit.  They raised over a million dollars this year and gave out all kinds of prizes.

I’ve put in my money for the lottery almost every year it’s been run (I think I forgot one year).  I never got a prize.  But it seemed a worthwhile cause and I figured someone had to sit on the curb and clap as the winners rode by, if only to encourage people to keep doing this sort of thing.  Win all around, really.

This year they pulled my name from the hat.

I got a hint of this a couple of weeks ago when I got an email asking me to verify the contact information I had sent them.  Yes, yes, everything looks right, thanks for asking.  What of it?

Well, today I got a very large padded mailer with four – count ‘em, four! – new books, just for me! 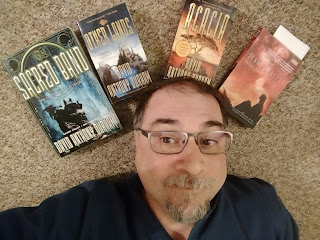 It’s not why I enter that contest, but I’m not going to turn it down, that’s for sure.  So congratulations to me!

Next year, perhaps you can enter too!
Posted by David at 9:31 PM

We have never *not* won multiple prizes from Worldbuilders. You must have been bucking the odds for a while!

I was thinking of you on Thursday - specifically your repeat-win trivia contest posts. We (my family plus next-door neighbour) defended our title at the community spelling bee - 4 wins in five years :). Wondering whether to split up next year or something, but not unwilling to play the part of Evil Empire, really..

Yeah, I've got a special talent for not winning prize drawings. It's a gift, unfortunately.

Congrats on the spelling bee win(s)!

We got to that point with one of our trivia contests (held annually to benefit the local symphony) since it seemed that we were discouraging participation by other teams, which was counterproductive really. But then the local parochial school beat us, and after that the symphony stopped running the contest, so it became moot.

The other trivia contest we used to compete in regularly was sponsored by the local literacy advocacy group, which disbanded (insert punch line here).

The latest contest we've only done twice and came in second both times, so I figure we can keep at it. :)

The choice is yours, I suppose!