1. Remember having free time?  Me neither.  I think one of the biggest differences between Then and Now (however defined) is that back Then there was free time – unstructured hours to do with as one pleased – and Now there is not.  I don’t know anyone with free time anymore, not even unemployed people.  I think this is a loss, really.

2. Lauren has joined a marching band.  It was rather sudden, and we are rapidly discovering that marching bands are immense commitments.  They rehearse ten days per week for approximately thirty-six hours a day, as near as I can tell.  But she is enjoying it very much, enough to keep to that commitment, so there you go.  She started as a percussionist and then they discovered she could play piano so they moved her into what they call “the pit,” which is a stationary unit they use for field shows – think of a small group of musicians just off the 50-yard-line, out of bounds, while the rest of the band marches up and down the field.

3. The pit also includes a cellist, which, having seen that Woody Allen movie, I find deeply amusing.  I don’t know if anyone even remembers that movie anymore though.  I am old, old, old.

4. Our friends Josh and Sarah came out to visit from California this past weekend, and we had a lovely time catching up and running around Wisconsin.  We spent a day picnicking at Devil’s Lake and another day going from cheese shop to cheese shop, and they got a tour of my old museum from Tabitha as well.  Plus they are game people, which was fun in the evenings once we got home.  It’s a grand thing to get together with old friends. 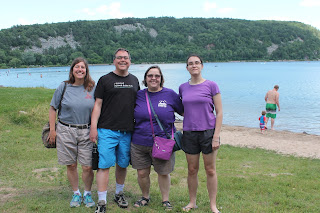 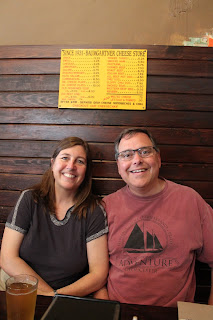 5. We discovered yesterday that you can, in fact, break a Corelle dinner plate if you drop it just right.  And let me tell you, when those things go, it is spectacular – the plate essentially disintegrated into high-velocity shrapnel in amounts that may well have violated the law of conservation of matter since I'm guessing we could have reconstructed two plates out of it.  Seriously, does ISIS know about this stuff?  I hope it’s embargoed.  I posted this discovery on Facebook and was utterly amazed at how many people have been through the same experience with roughly the same level of awe at the amount of shards.

6. Rabbit Fun Day was a week or so back, and Lauren’s bunnies did well.  It helps that she has the only Dwarf Hotots in the county, I suppose, but the judge did say that they looked good compared to breed standards so they would have won their ribbons even against competition.  They made quite the haul of ribbons, actually.  Win!  I spent the day selling food at the concession stand, but I did get to see the judging, which was nice. 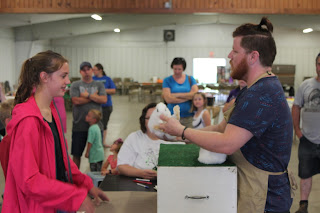 7. I don’t watch much television – haven’t in a long time.  This was not a moral decision but simply a reflection of how much time I didn’t have when I made that choice and how hard it is to get back into it once you fall out of the habit.  Life is a liquid - you take something out and there's no something-shaped hole to put it back into later.  Other than random hockey and soccer games, really all I’ve been watching consistently for the last couple of years is Doctor Who.  Kim and I have been working through the American Gods series – which is just about the most gorgeously shot production I have ever seen – and now that I’ve read the books we’ve started the Game of Thrones shows.   Well I’ve started – she’s seen them.  But even that has been put by the by of late – we’re three episodes behind in Doctor Who, with one to go before the end of the season.  Kim’s actually four episodes behind since she was out of town for one and we somehow managed either not to record it or to delete the recording, we’re not sure which.  We’re three episodes behind American Gods too, which means they have actually finished their season and left us in the dust.  And I’ve bogged down after two Game of Thrones episodes, both of which were very good and made me want to see more.  This is why I don’t start much television these days – I just know I’m not going to make it through, no matter how good it is.

8. It is a strange experience to go to work and a) be the first car in the parking lot, b) find that all of the office furniture is up off the floor as if the carpets are about to be or were recently cleaned, and c) be the only person in the office for several hours, in an office that is relatively off the beaten track so few people come by without specific intent to come by.  For a while I wondered if the campus was actually closed and I’d missed an email.  It wouldn't be the first time.

9. I’m not sure why students think professors don’t know what Wikipedia is or how to find it.

10. My home office is now two semesters behind on Shoveling Out, and next week we will have friends using it as a guest bedroom, so I’d better get shoveling.  Sigh.
Posted by David at 9:31 PM