The Changing of the Poultry Down at Cluckingham Palace

There has been a changing of the guard when it comes to the poultry in our house.

Add that to the list of things I never thought I’d say.  It continually amazes me how many of those things are poultry-related.

We’ve had the chickens in our house for a while now, and other than Ryland they were doing pretty well.  Even Ryland has mostly recovered – she’ll never be a show bird, but she looks like she’ll be good for a few years of happily clucking around and laying eggs.  But the thing about chickens is that they grow fairly quickly, and this can get really irritating really quickly.  So when one of the roosters started in with that “training crow” that they do when they first start to get their rooster on, the one that sounds like a dying accordion, we knew it was time to get them out to the barn.

We would not be having a repeat of last year, when every dawn was met by a chorus of profanity aimed at the crowing roosters in our basement.  That sort of thing is bad for morale.

Fortunately, we have had a pretty mild winter.  Hey – make climate change work for you, I suppose.  It’s actually been on the chilly side for a week or two, with highs below freezing even, but it’s March and that sort of thing comes to an end quickly.  We’re looking at seasonal early spring temperatures here for the foreseeable future, and since the chickens are now all fully feathered out that meant they could go to the barn.

Of course, that also meant that we needed to get the pen ready for them.

You can’t just dump new birds into an existing flock.  That’s a recipe for disaster.  So tossing them in the pen with the birds we already have out there wasn't much of an option.  We usually try to keep the new birds in their own pen until after the fair and then merge the flocks for ease of winter maintenance.  And this meant going out and getting that corner pen ready.

It hadn’t been used since last fall, and it showed.

So yesterday Lauren and I headed over, armed with tools, brooms, chicken wire, and a willingness to excavate a chicken pen on a nice early spring day.  I spent much of the afternoon up on a ladder stapling chicken wire to the ceiling in order to cover the gap between our pen and the one our friend uses for her chickens (last year she left it empty so it wasn’t a big deal when our birds flew over – this year that would be problematic) while Lauren took the broom and wheelbarrow and cleaned the floor down to the concrete.  We discovered a soup bowl that had spent the winter there, buried in the pine shavings and general debris, so win for us.  And being a historian is good training for working in dusty spaces.

Eventually it was done and we got their enclosures set up inside the pen, at which point Kim brought out the birds and we got them settled.  They’re in four sub-units now – one for Ryland, one for the most aggressive rooster (Arnold, apparently), one for the other two salmon faverolles, and one for the four small birds that Arnold was annoying.  They can all see each other and get used to each other, and in a couple of weeks we’ll let them mingle.

This morning everyone was fine.

So you’d think we were done with poultry in our house, but then you’d be wrong.

On Wednesday we went over to our poultry dealer.  It’s like a drug dealer, only it’s legal, and they’re birds instead of drugs, and there’s nothing shady about it, so really it’s not like a drug dealer at all.  Forget I said that.

We came home with a dozen turkeys.

This is actually more than we’d thought we’d get.  Lauren usually sticks with the bronze turkeys, since they don’t show dirt (seriously – you only have to wash a bird for the County Fair once to realize that this matters) and we’d ordered ten, but since our poultry dealer had extra white turkeys he let us buy two of them.  Why not?  For a couple of bucks, we'll see what happens.

For a few days they were in our living room too, along most of the chickens (two were down in the basement, along with all six rabbits – the cats have the run of the place, so who knows where they end up is what I want to know).  One of the bronze turkeys has since passed on – they’re surprisingly fragile birds – but we still have nine of them and the two whites.

They’re already bigger than they were, and Lauren has had to move them from the red bin to the rather larger blue bin that Arnold and his chickens vacated yesterday.  In the picture below they’re about the size of baseballs, not counting their feet.  They’ll go out to the barn next month, probably.  They’re still a bit young for that, and we have some prep work to get their pen ready after the long winter too.

I’m not sure when this became normal in my life, but there it is. 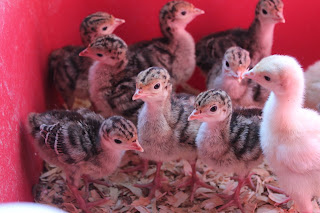 I see my spell checker is being a comedian again. I think I'll leave that one alone. And why not? I miss 90% of those substitutions anyway.

Thanks (for) giving us this insight into the world of dinner. I mean poultry. (Too early?)

Got Arnold in one! I didn't even know he had a name at all until yesterday.

Not too early - we have always tried to be up front about the function of livestock (vs pets). Oddly enough, 1) we don't eat the chickens, since the hens are useful for eggs and we sell the roosters to a friend who eats them (we have eaten two of the turkeys, though - they were delicious, oddly enough), and 2) just about the only meat Lauren actually enjoys eating is in fact chicken.