Juuuuuust a Bit Inside

Have you ever made a joke that was just too damned subtle for its own good but it was still worth it to you, even if nobody else got it?

Welcome to my world.

I live in what I consider to be a small town.  Lauren disagrees with me whenever I say this, pointing out – accurately, it must be said – that it is legally a City and that it is the most populous human settlement in the county, but I grew up in and around what was then the fourth largest city in America, a place where the population of Our Little Town would be considered a rounding error, so a small town I continue to regard it as.

This has its plusses and minuses, as most things do.

One of the things that could be either a plus or a minus depending on how it plays out is that it’s remarkably easy to get into the newspaper here.  There aren’t many professional historians living in Our Little Town, after all, so once you become known as someone who can reliably comment on stories that require historical knowledge, the reporters tend to remember you.  Between that and my stint running the museum in the next town up from here, I’ve somehow managed to become a regular in the local press.

This is one of the weirder parts of my life, really, but not a bad part for all that.

I once got interviewed for a story on the local public garden, for example – a garden that had a space dedicated to the sorts of things that Thomas Jefferson grew at Monticello.  It was fun talking about Jefferson that way.  Not much call for it in most classrooms, sadly enough.

I ended up back in the paper this week, though this time for something that the Founding Fathers probably wouldn’t have known too much about.

It was an article on Christmas letters.

We write a Christmas letter most years, whenever time and patience allow.  We try to keep them interesting, because it is my firm belief that authors must justify taking time out of readers’ lives.  It’s not the job of the reader to prove himself to the author.  So we write in various different formats – last year we did it as a Playbill, one year it was the Declaration of Independence, and some years we just do charts and graphs of the year – and we try to make it fun.  The reporter interviewed me and several other people who also do Christmas letters and wrote an article with helpful advice for those who might also wish to write such letters.

This particular reporter is one of the funnier ones at the local paper, and it’s always worth reading her stories for that alone.  As part of the humor of this piece, she described us as “one of those perfect families with high-achieving children, award-winning pets and a dust-free home,” which I thought was funny.  Yes, our children are pretty high-achieving people – a testament to their character more than anything else – and our pets have in fact won any number of ribbons down at the 4H fair, depending on how far you stretch the definition of “pet,” but dust-free we are not.

I’m a historian.  Dust is my milieu.

Someone clipped that paragraph out of the paper and posted it to my Facebook page as a photo, which of course engendered all sorts of conversation from people who know us and were, shall we say, deeply amused by the notion that we’d be dust-free.

Naturally, I had to make that my cover photo.

And while I was at it, I thought I’d put up a new profile photo, since Facebook has been on my case about that for months now.  Facebook puts angry little red marks on your page whenever they decide you’ve had your profile and cover photos for too long, and to be honest this just made me not want to change those photos ever again.  But opportunities arise, and so here I was.

What should I put up?

Eventually I chose a photo of a cartoon character from a show that the girls used to like back when they were little.  It was a show about a vaguely dark-ages family, set in a bizarre little castle in a run-down kingdom far from the centers of whatever civilization existed in this world.  There were sorcerers, warlords, and the usual quasi-medieval trappings that one associates with fantasy as a genre these days.  The humor was clever and the animation exuberant, and you could sit there with your child and enjoy it as much as they did for what were probably different reasons.  It was a fun show, really.  I was kind of sorry when they outgrew it.

The show and the character were both called “Dave the Barbarian.” 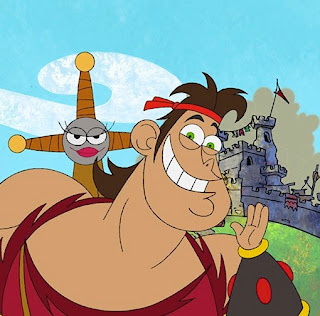 I thought it made a nice contrast with the notion of us being dust-free.

I am no doubt the only person who got the joke, and that’s okay by me.  Sometimes you just have to keep yourself amused in this cold, cold world.
Posted by David at 3:01 PM

During the spring and early summer months in 1973 I read every single printed word in a desktop dictionary. Why I would do such a thing is a longish and really rather boring story; but it did result in substantially increasing my vocabulary to a level somewhat above what might be considered 'average'.

I love the fact that you keep exercising my vocabulary, and every now and then send my ring finger after the right mouse button to look up [highlighted] word in my computer's dictionary.

I absolutely adore it when I then have to google a word you've used because it's not in my computer's accumulated list of defined words.

"milieu" is such a word. I recognized the word, but as one not in frequent use I just failed to dredge deep enough into the farthest reaches of my memory banks to fine the definition. Needed a little jar, so to speak.

And that, my cyberfriend, is about as close to writing a christmas letter I will ever get.

A Merry, and or Happily Content-filled Holiday Season to you, and, of course, all those whom you hold dear.

I read pretty much all the time, and I acquire a fairly wide store of words that way. Milieu is a fun one, as is parlous (and snit, one of my favorites as a word if not an activity). Glad you enjoy them! :)

Thanks! And Merry Holiday Season to you as well!