1. Yesterday was officially our 21st anniversary, although we have often counted “the Saturday after Thanksgiving” as the day of observance so today will work just as well.  Our marriage is officially old enough to drink!   If you had to hang around with me for that long, you’d be glad for that too.  Here’s to Kim and all we share, and to many more such anniversaries. 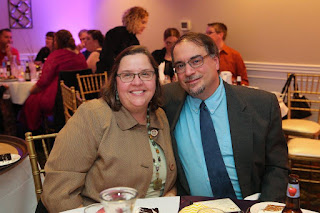 2. We had a pretty low-key day of it, really.  We dug out the Settlers of Catan game that our friends Joshua, Abby and Zach gave us this summer and learned how to play it (finally).  Tabitha won, in the end.  And all four of us went out to dinner at the HuHot Mongolian Grill that opened recently here in Our Little Town.  We like that place because the food is tasty and it’s fun to watch them make it, and they are very conscientious when it comes to food allergies – they have a whole system in place just for that.  So, a good day.

3. We had a lovely and politics-free Thanksgiving over at my brother-in-law’s, where most of Kim’s side of the family (and much of my sister-in-law’s as well) gathered for food and conversation.  I am thankful for many things, and it is good to be reminded of that these days.

4. It is a bit melancholy to eat an animal that you raised yourself, though, even if it was livestock and that’s why you raised it.  Popeye was one of my favorites of the turkeys this year – she was the adventurous one who could be counted on to explore her surroundings when the rest of them were huddled in a corner.  But, as the Native American tradition has it, you need to honor the sacrifice of the animal with gratitude, and so we did.  She was, it must be said, delicious.

5. As was Jamaica, another of my favorites, who had been in our freezer since last year and who we finally got around to cooking in October.  So to all the militant vegetarians out there, yes, I know where my food comes from.

6. You would think with all the money that they had available for the new Harry Potter film they could have sprung for some light bulbs on set, but then you would be wrong.  I’m not sure why everything has to be half-lit and moody these days – perhaps a reflection of the times? – but it does make it harder for us middle-aged folks to follow the action.

7. Ewan, I’m not sure when I will get to revising that list of books for the early American republic that I posted a few years ago (thanks, Lucy, for reminding me of that one).  Here’s the link to the old post, though.  Since then I have read Gordon Wood’s Empire of Liberty and it was every bit as informative and illuminating as I had thought it would be, and I would definitely start there.  The bibliographic essay alone is probably worth the price of the book if you want to follow up on things – it’s a very good survey of the literature worth reading in that field that way.

8. The failed Trump administration is already setting new lows for presidential conduct and he hasn’t even been inaugurated yet.  In the three weeks since the election he’s gotten into a Twitter spat over a Broadway play (sweet dancing monkeys on a stick, won’t some grown-up please take away his Twitter account?), been forced to settle a lawsuit for defrauding thousands of students at his sham university (and bragged about how he got off cheap), named an outright white supremacist as his top advisor, nominated for Attorney General a man the GOP itself said was too racist to be a judge back in 1986, and named a Secretary of Education who is openly hostile to education for anyone other than people as wealthy as herself.  His most avid supporters, meanwhile, have been painting swastikas across the US like the neo-Nazis they are, and demanding that the rest of us fall in line.  Fuck that.  Fuck that sideways.  This nation fought for four years to stuff the Nazis back into Hell where they came from, and to tolerate their re-emergence would be treason to America.  It’s going to be a long four years, but what else can you expect when your nation is in line to be headed by a 70-year-old toddler?

9. I’m not a Mike Pence fan – anyone who seriously argues that American citizens should be treated as second-class creatures because his personal religious beliefs somehow matter more than the Constitution is a danger to the republic, as far as I am concerned – but credit where due.  He was the one in the audience for that Broadway play and his reaction to it (“that’s what freedom sounds like”) was entirely appropriate.  Now if he can only explain this to his boss.

10. All of the appliances in our kitchen have decided to die at once, possibly in response to the political situation, and so it has been an expensive fall.  But now we have a new refrigerator to replace the one we got second-hand when we got married – it will probably pay for itself in reduced electricity costs in about eighteen months, if my calculations for the old one are correct – and we have a new microwave to replace the one that suddenly didn’t have a door one morning.  Fortunately the new microwave fit onto the wall bracket for the old one, so there’s that.  Now everything is sleek and stainless steel and it’s going to take some time before I feel hip enough to go into my own kitchen.

11.  We got our passports renewed this week, because this is not the time to be without a passport.  Apparently we were not the only people who had this notion, as the County Clerk was doing land-office business in that regard.

12. It still amazes me that there are people who have never seen the WKRP in Cincinnati Thanksgiving episode.  Yes, it originally aired in 1978, but still – c’mon, people, it’s a classic of American arts!
Posted by David at 10:11 AM

I would bet that a lot of the passport activity is coming from transgendered people. In 2010, when Hillary Clinton was secretary of state, she implemented a policy to make it easier for transgender people to codify their gender identity on their passports. Transgender advocates are concerned that the policy could be in jeopardy and are urging trans people to apply for their passports as soon as possible. Is the policy actually in jeopardy? Who knows. If Mike Pence has anything to say about, I suspect it is. But better safe than sorry. There's a YouCaring account set up for donations to help trans people who can't afford the fee (https://www.youcaring.com/transpeopleintheunitedstates-688603) and an online database of trans-positive legal resources for people living in the United States (https://translawhelp.org/).

One of the freebies I get as faculty here is attending classes as an auditor. I may try a US history class or two as additional info.

Vince - While I know there are transgendered people here in Our Little Town (I've met a few myself), and I would agree that they'd be wise to get their passport sooner rather than later, I can't imagine there are enough of them here to account for the demand. I'm guessing the fear is a bit more general than that. Thanks for the link, though - if there are trans readers following this blog, perhaps it will help.

Ewan - You're welcome! I didn't know you were a faculty member - what do you teach? We don't get free auditing rights down at Home Campus, at least not officially, but most professors will let colleagues sit in anyway if they ask nicely.

Lucy - Thanks! We try to be amusing, to ourselves if not necessarily to our children. They'll get the jokes eventually. And yes, I probably should have put the link, but again I just cannot fully wrap my head around the idea that there are actual adults who have not already seen it. It boggles my mind, it does - and my poor mind is having enough troubles these days coping with what insists on being called reality.