Don’t mess with academics when it comes to trivia.  We invented it.

Last night was the annual trivia contest and fundraiser for the local symphony orchestra, here in Our Little Town (and thereabouts).  Every year we try to get a team together to represent Home Campus, and we’ve been on quite a winning streak – four straight years going into last night’s competition.  We would be short our best player, however, as she had class scheduled for the night, and the other teams were getting kind of tired of coming in second so they were focused and ready for us.

As if.  At the end of the night, dear old Home Campus got to keep the trophy for another year.

It was close, though – closer than any of the previous years.  We led wire to wire over the five rounds of 30 or so questions each, though our margin was as low as one point and never got any larger than eight.  Those sharpers down at Blessed Catholic School darn near beat us.

And to be honest, part of me was rooting for them.  Not enough that I stopped trying to win, but enough that I don’t think I’d have been upset if they’d pulled it off.

You kind of worry, after a while, what this sort of winning streak will do to the event.  It’s a fundraiser after all, and you don’t want people to get discouraged and drop out.  We’ve already chased off Local Tech and Nearby Private College – it looks bad to lose to us, I suppose – and it would hurt the orchestra to lose more teams.  It might be nice to have someone else win for a change.  On the other hand, well, they knew the job was dangerous when they took it and it would probably be even more discouraging – not to mention a bit insulting – if we just retired so someone else can win.

You want to be the champ, you have to beat the champ.  That’s how it goes.

So for another year we reign supreme, the masters of minutia, the greatest of the least.  The big trophy gets to stay in the Home Campus trophy case and we all get little trophies to keep, as well as Fabulous Prizes donated for the cause.

It was a good night. 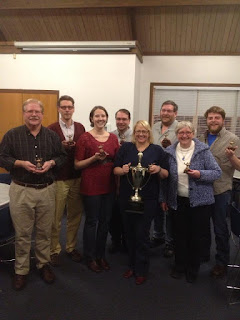 The best player being your wife?

The best play is actually our psych professor down at Home Campus. She is, oddly enough, also our resident sports trivia expert.