It’s been quite a week here, as I try to get back into the swing of being a productive citizen.  The joy of being a teacher is that you can’t hide really – classes start when they start and there are all those faces staring at you, waiting for you to do something, preferably something a) entertaining, b) educational, and c) not all that difficult to grasp.  Since my tap-dancing skills are fairly minimal, I find it best just to be prepared for class.

Which is taking most of my time these days.

But there are things that are worth taking some time off for, even if you do end up paying for them later.  Most of them involve people you like.  I find that most worthwhile things in life involve people I like.  The rest involve books.

Well, a large chunk of us did.  We’re scattered all across the US and Canada, so getting everyone together in one place for a single event is probably never going to happen.  But a number of things came together to bring nine of us (and an assortment of spouses and partners) out of our lairs and into each other’s presence.

Any references to Nazgul in the comments will be treated with derision.

For one thing, it is WorldCon time, and the UCF is nothing if not full of SF/F fans.  In fact, there are a number of published authors in that field among our number, and one of them is actually on panels for this WorldCon.  So woo-hoo!

For another thing, this was our way of honoring one of our own.  Wendy passed away last year, and somehow the idea of doing something in her memory morphed into the idea of having a Hollywood-style (because having been to Birka, I know that real Viking funerals were not that dramatic) Viking funeral involving some sort of boat soaked in Jack Daniels, set on fire and cast adrift in the Chicago River.

So Dr. Phil, Wendy’s brother, made reservations at a Japanese steak house in the Loop, and we gathered in her honor.

Do you know when I figured out I’d lived in the midwest for too long?  When the idea of driving several hours each way to go have dinner with someone and then return that night stopped being absurd and started being something to do.  The first time this happened was shortly after Kim and I were married, when we drove up to see my dad while he was on a business trip to Oshkosh.  Last night was just the latest example.

I cannot tell you how much fun it was to see all these people in 3D-space for the first time, having gotten to know them as words on a screen.  I was expecting to find myself among real friends, and so indeed I was.

I stayed for the dinner and then had to get back onto the highway for the long drive home, so I don’t know how far the idea of the Hollywood-style Viking funeral actually progressed into the real world, but you know – it doesn’t matter.

It’s far more important to know that the idea of friends progressed into the real world, there in a restaurant in Chicago, to share stories and create more of them.  You can’t honor anyone’s memory better than that. 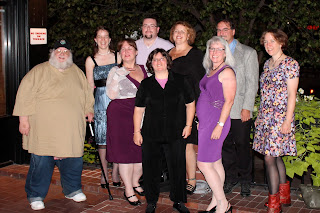 That's a group that looks like they're up to no good.

It was a pleasure to meet you, and everyone else, last night.

Sorry I missed the fun of joining in...blasted work meetings. Looks like you were all enjoying each other! [Nazgul. Just testing.]

I enjoyed meeting you too, Matt. You know, by midwestern standards we're practically neighbors!

It would have been even more fun if you could have come along, Kim.

We had the boat, the Jack Daniels, a brand new purple BIC lighter and a vial of Wendy's ashes, but alas, we never assembled them.

Thanks for coming though -- it was the gathering that was important.

I wish I could have made it.

Dr. Phil - I was glad and honored to attend.

Megan - I wish you could have come, too. You would have been among friends.