Sometimes things take on a life of their own.

In the summer of 1983 we went down to Williamsburg VA to visit my cousins.  They’d moved down there not long before, spreading the family out from its Philadelphian roots.  We’d gone down there for a vacation a couple of years before my cousins moved, and now we could go back and enjoy the sights and activities of the area and visit family at the same time.  Win.

At some point in this process, the adults decided that all five of us cousins needed to pose for a group picture on the stairs.  There were a bunch of photos taken of us on those stairs, in varying configurations and degrees of catlessness, but this is the one that somehow became canonical. 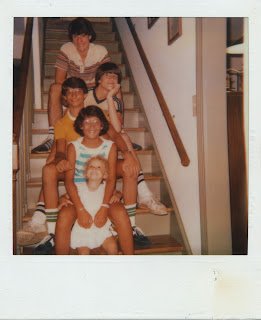 Elizabeth, the youngest, is at the bottom.  Then come my other two cousins, Paula and Chris.  My brother Keith is next.  And then at the top, with a grin that invites any number of mildly astonished adjectives, is the oldest, yours truly.

You will note the prevalence of earth tones.  They were stylish back then.

Seventeen years later, for reasons that even now I am not sure I could articulate, we decided to do this again. 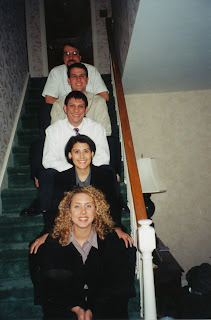 My grandfather’s funeral was that day, and we had all gone back to my parents’ house outside of Philadelphia for the traditional food- and family-filled aftermath of such things.  Perhaps we just wanted to do something fun on such a day, though why that translated into reenacting an old Polaroid escapes me.

And then, of course, once you do something twice on purpose it becomes a tradition.

Four years after that photo we were back at my aunt and uncle’s house – this time in Tennessee – and decided to do it again. 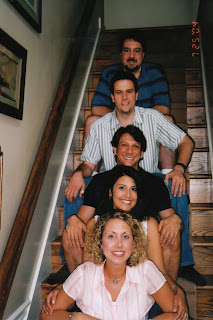 We even convinced our parents to join in the fun. 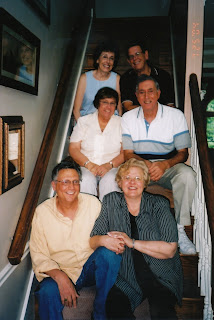 That’s my Uncle Bob and Aunt Linda there at the bottom – the youngest of the group, as per tradition.  My parents are there in the middle.  And at the top are my Aunt Rita and Uncle Ed, who were a year ahead of my parents back in high school.  I once worked out that Rita was actually my first cousin once removed, but “Aunt” is a whole lot easier to say.

We liked that so much we had the cousins line up with their respective spouses. 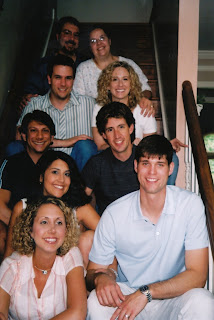 Kim and I are at the top.  My brother and his wife Lori are right below us.  My cousin Chris and his spouse Chris are below them – at the time the State of New York held rather benighted views on marriage, but we considered them to be as married as the rest of us.  Below them are Paula and Randall.  And at the bottom is Elizabeth.

But Elizabeth was still single at the time.  So of course, as soon as she got married in the summer of 2007, we had to do it again.

First we got the cousins to pose, in as exact a replica of the old pose as possible. 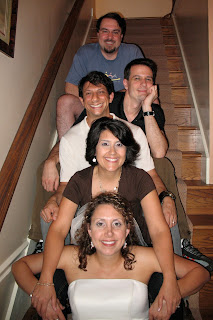 And then we got Brian to join in.  You will note that Elizabeth is still in her wedding dress.  We wasted no time. 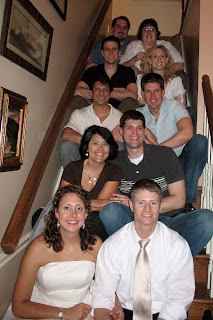 By this time, though, my brother and I had families of our own.  So a few months later, when we all got together for Christmas back at my parents’ house, we had the kids pose. 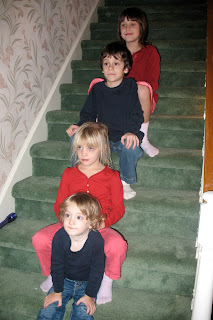 Again, they’re in age order.  Sara, the youngest, is at the bottom.  Then comes Lauren.  Sara’s brother Josh is above her, and there at the top is Tabitha.

It’s been almost five years since then, and it’s getting on time to do another round of these photos, though when that would be I don’t know.  People scatter, and as the group gets larger it gets harder and harder to gather everyone in the same place at the same time.

But it needs to be done.  The kids are so much older as to be almost unrecognizable, and there are new ones to be included.  Paula’s Annelise is four now.  Elizabeth is due in the fall.  And the rest of us are older now too.  It’s an interesting thing, watching everyone get older in the same poses.