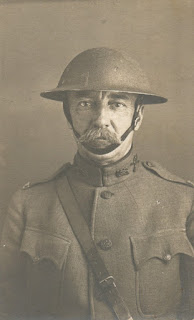 I’m not really sure who this is.

This man fought in World War I.

As a historian, I have tried to explain the significance of World War I to my students in a number of different ways, and so far the one that has worked best has been to compare time to a river (original, yes, I know – sue me).  “Most events are just pebbles tossed in the river,” I tell them.  “They make their splash and they’re gone and the river flows on mostly unbothered.  Some events are boulders.  They sit in the middle of the river and force the river to work around them, and if you look you can see the ripples and eddies where this is happening.  They change the river for a while.  But once in a while you get an event that is a dam.  An event like that changes the entire course of the river.”

World War I was a dam.

Pretty much everything that happened for the rest of the 20th century can, in one way or another, be traced back to World War I.  The culture.  The economics.  The politics.  The wars – there’s a reason why some historians don’t really differentiate between the two world wars of the 20th century and simply refer to them collectively as “The Second Thirty Years’ War,” after all.  Pretty much everything, really.  We live in a post-World-War-I world.

It was a brutal and bloody war, the first major industrial war, one that took in men and machines and spat back wreckage and bodies, or often nothing at all, and did so in quantity.

That war ended a hundred years ago today, with an armistice.  On the eleventh hour of the eleventh day of the eleventh month – a fine bit of poetry that no doubt cost some poor soldier his life in the closing moments of the war, waiting for the final bell to sound – the fighting stopped.

An armistice is not a peace treaty.  It does not formally end a war.  It just says, “Enough.”  Not everybody was happy about that.  General John Pershing, commander of US forces in Europe during the war, complained about the armistice being too soft on the defeated Germans.  “They never knew they were beaten,” he said.  “It will have to be done all over again.”  And two decades later he was right.  But for most people an end to the butchery was enough.

Take a good look at that man’s face.  An armistice was enough.

This summer we went to Ypres – Ieper, in Dutch – which was the scene of some of the most prolonged and brutal fighting of the war.  We walked around through what once was No Man’s Land, the churned up ground between trenches that were often no more than a two-minute walk apart.  It’s peaceful now, covered in grass and – when we were there – a public art piece that our friend Veerle had contributed to.  You’d never know what it was a century ago unless you did the research.

In Flanders fields, where the poppies grow.

All that fighting.  All that destruction.  It was hard, even then, to understand what had been achieved by it all.

In 1920 an Austrian newspaper ran a contest to determine what the most dramatic conceivable headline would be.  It could be anything at all, really.  “Man Walks on the Moon!”  “Second Coming of Christ!” (you can adjust that number to suit your own religious views, of course).  “Humans Learn How to Talk to Animals, Discover They’re Boring!”  Whatever.  Hundreds of entries poured in from all over the country.  The winning entry simply said:

Do you have any idea the depths of the despair in that?

It’s Armistice Day today, one hundred years after the guns fell silent in the trenches and the soldiers could come home.  In the US we call it Veterans Day now, but that’s really a different holiday.  Veterans Day celebrates people who go to war – and really, if anyone should have a day set aside to honor them, they certainly do.  But Armistice Day isn’t that.  Armistice Day celebrates the people who come home from war when we finally say “enough.”  I think that’s an important distinction to make.

There are lessons to be learned from all of this, of course, though what those might be varies with the teller.

“Enough” is a fitting epitaph for such folly.

And yet, somehow, seems to just miss the mark.

It's hard to wrap your head around the ghastliness of World War I.