We have another driver in the house.

After making it through her Driver’s Ed class without any particular difficulty and successfully logging the 30 hours of parent-supervised drive time (now carefully tracked with an app on your phone rather than painstakingly entered onto any random scrap of paper that happened to come to hand and then frantically copied down in some kind of legible order onto a different sheet of paper at the last minute), today was the day.

I picked Lauren up from school early, because the DMV has only so many slots available and you take the one that you’re lucky enough to get, even if it is during school hours.  I’m not going to complain, though.  For one thing, there’s nothing particularly bothersome about getting out of school early on the week before Thanksgiving.  And for another, despite all the common lore I have never had a bad experience at the DMV other than perhaps waiting longer than I would have liked.  I get that at the grocery store too.  You live with it.

We actually got there early and filled out the paperwork.  Tabitha is home from college now and she had to get her own license renewed so she came along and filled out other paperwork and now has a new license on order.  And then the examiner came by to whisk Lauren away for her road test.

They actually do road tests in Wisconsin.  In Pennsylvania they take you out back behind the State Trooper barracks and let you plink around on a specially designed course that cannot be failed by anyone who should be allowed remotely near a vehicle, even as a passenger.  In Wisconsin they figure they’ll turn you loose on the roads and let Darwin sort it out.

So Tabitha and I had time to sit there for a while, staring at the wall of specialty license plates that you can, for an additional surcharge, have for your own vehicle.  There are two different designs celebrating the Milwaukee Brewers and only one for the Green Bay Packers, which – having lived in this state for over two decades now – seems backwards to me.  There are designs celebrating children, farms, UW Madison (though not any of the other campuses that I could see), and every branch of the military.  I will admit that the “Pearl Harbor Survivor” license plate did give me a bit of pause.  Pearl Harbor was bombed 77 years ago, so anyone eligible for this design probably shouldn’t be driving at all.  I wonder how many of them they sell these days.

The road test didn’t take long.  They never do.  By my odometer it was maybe eight or nine miles of driving, as well as a few questions about the vehicle that Lauren told us about afterward.  She passed with ease, losing only 3 points total. 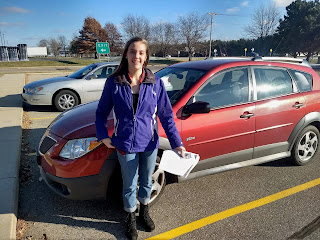 She’s out now.  There’s a basketball game across town with the Rival High School that she and her friend wanted to see, and Lauren zoomed off to pick her up and go to the game about an hour ago.

It is a strange thing to watch your child drive off on her own.

I remember doing this with Tabitha.

I remember being on the other side of it when I was that age.

Drive safely, Lauren, but go explore.  The world is out there, and I’ll be here.
Posted by David at 8:06 PM

I'm assuming that the first comment was aimed at someone other than me. ;) I will have to remember it, next time I find myself confronted by one of my SGFs .

Sorry, David. Yes, the first comment is what I like to say to Small Government Types (or even Anti-Government Types) when they complain about some minor government annoyance. I usually hear crickets in return.

Congratulations to your daughter on getting her license. There's an old essay by Robert Fulghum about Driver's Education, how it's one of the very few coming-of-age rituals we have in our modern era.

No problem - I figured that was what it was, but I have reached that part of the semester where my ability to have Normal Adult Conversations gets seriously low. Thanksgiving cannot come soon enough. As I said, it's a great line I'll have to remember and use in the future.

I like that essay. Thanks! Kurt Vonnegut used to say similar things about graduations. I think they're onto something really. We've lost a lot of those rituals these days.